UPDATE 24/5: ANUSA has condemned violence at the protest and committed to “greater inclusivity” in future events. ANUSA focused on the “generally good nature of the event” in a statement posted on their Facebook page. However, they reminded students that “we do not and never will condone any forms of violence”, in a nod towards the rally fracas.

ANUSA’ Education Committee, the chief organisers of the protest, expressed concern that the violence tarnished what was an otherwise successful rally. “There was good turnout and good coverage by the wider media,” said Education Officer Robyn Lewis at a meeting on Wednesday night. Particular concern was expressed regarding the actions of Socialist Alternative (SAlt) members, and how their participation affected student engagement. “We have to deal with the harsh reality of the fact that although SALT can be the most dependable and reliable activists… they can be poison, in the eyes of the student body,” said ANU Labor Left Vice-President Dominic Cradick. “I was not entirely happy with how SALT conducted themselves on the day,” said Lewis, citing SALT’s failure to help set up the protest.

A protest against cuts to higher education almost turned violent today, after Counter-protesters from the ANU Liberal Club marched into Union Court. The counter-protesters’ signs were seized and ripped apart by protesters, amidst pushing, shoving and shouting. A Socialist Alternative (SAlt) member later pushed a newspaper against a counter-protester’s face, leading to allegations of assault. 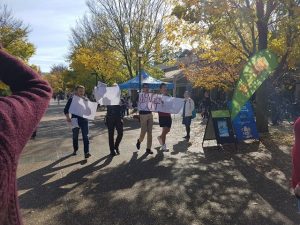 Four counter-protesters approached the demonstration, chanting “NUS is not for me, total waste of student fees”, interrupting the speech of Gabriela Falzon from Unions ACT. They carried signs reading ‘Abolish ANUSA’, ‘Disaccredit and Disaffiliate’, ‘Nuke the NUS’, and ‘WENGER OUT’. The four were all members of the ANU Liberal Club, including President Ramon Bouckaert. The ANU Liberal Club later claimed responsibility for the protest on their Facebook page.

The counter-protesters were shouted down by rally attendees chanting “No Cuts, No Fees, No Corporate Universities”. A fracas ensued: rally attendees seized and destroyed the Liberals’ signs, amidst pushing, shoving and shouting. The counter-protesters were separated from the rally by ANU security and Oscar Jolly, Woroni Radio Editor, and the Liberals quickly left. There were chants of “Education should be free, throw the Liberals in the sea” as they departed. “That’s how the Liberals should be addressed every time they set foot on a university campus,” said Litia Roko, a Socialist Alternative member, “whether it’s a politician or these absolute scumbags”. 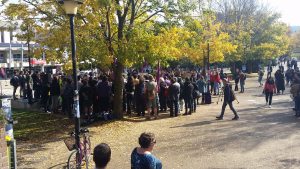 Attendance was high at the rally

ANUSA representatives questioned why the Liberals felt the need to stage a counter protest. “Nobody who asked to speak was denied,” said Robyn Lewis, ANUSA Education Officer. “ANUSA doesn’t endorse all the views [at the rally], only James [Connolly, ANUSA President] and I speak for ANUSA.” Bouckaert was skeptical as to whether he would be allowed to air his views. “Liberal students have tried and failed to work with the NUS for years, and we’ve been told time and time again that we are not allowed to have a platform because we are ‘scabs’,” he said. “Asking for a speaking slot at their rally for the opportunity to criticise them would have been a waste of time. We already know the answer.” 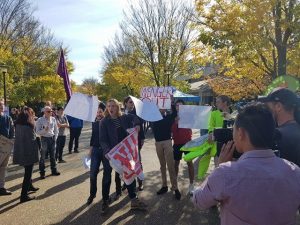 A second altercation occurred while counter-protester Wesley Mollentze was being interviewed by WIN News. Con Karavias, a member of SAlt , interrupted the interview, calling Mollentze “white privileged wanker” and “rich boy”, and covered Mollentze’s face with a copy of Red Flag. The Socialist Alternative publication came into contact with Mollentze’s face, an event witnessed by multiple reporters.

Mollentze later expressed a desire to see action taken by the university over the incident. “I did intend to press charges but I am not someone who would want someone’s university career to be cut short,” he said. “I do however want to see some disciplinary action taken and a formal apology.”

The protest was `part of the National Day of Action held jointly by ANUSA and the National Union of Students (NUS) against fee increases, cuts to welfare and lowering of the HECS repayment threshold. ANUSA Education Officer Robyn Lewis spoke against the recent budget, saying it shows “continued contempt for students, … this government has slashed the teaching budget of universities, while making students pay more for their degrees and pay them back sooner.” 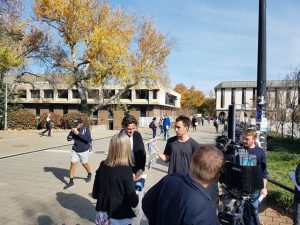 ANUSA President James Connolly read a letter from ANU Vice-Chancellor Brian Schmidt, in which Schmidt was critical of the higher education provisions in the recent budget. “I don’t see how it is fair to ask students to pay more, when you already pay more, far more, of your education here in Australia than the rest of the developed world,” Schmidt wrote. Connolly promised to continue the fight against the cuts. “As ANUSA President I oppose and will fight changes that see students pay more, earlier, without even getting an increase in the quality of teaching.”

Rally attendees and Liberal Club counter-protesters were still debating education policy long after the protest ended. “I believe in education as an actual right,” said a rally attendee, to which a Liberal Club member responded “Well, that’s just where we differ then.”