If elections seem to start sooner every year, it’s because they do. Cameron Allan has launched “Shake Up ANUSA”, a ticket promising to bring more student engagement to the Association and build a stronger social program. Voting does not start for two months, but Allan says he launched the ticket early to make it easier for students to reach out and join, not to get a head start on campaigning. 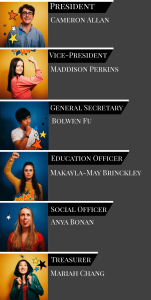 Campaigning at the start of July is highly unusual. Allan explained the early launch was not to “declare our vision for ANUSA”, but rather to “put out there … how people can get involved in the ticket”. Shake Up launched with no College or General Representatives, just the six ANUSA Executives, and Allan said he wants to invite people to contact him if they want to run.

The early launch is also to avoid criticism for perceived ‘insiderism’, Allan said. Historically, Presidential candidates or campus political figures have privately selected and ‘shoulder-tapped’ students to form a ticket, which many argue prevents those outside their social circles from running. Last year, ANUSA implemented an “Expression of Interest” form where interested students could apply, but few made use of it. Allan said he wants to combat this phenomenon more directly by “encouraging people …  in a really organised way”. He acknowledged this couldn’t “do everything to shore up accessibility” in elections, but was proud they were “taking some steps”.

Allan’s ticket will not be unopposed in the 2017 election. Current Vice-President Eleanor Kay and former Deputy Women’s Officer Tess Masters have publicly declared for President and Vice-President respectively. Current General Representative and former Unilodge President Howard Maclean is planning an independent candidacy for General Secretary. Observer will have more updates on candidates in the coming weeks.

“Shake Up” has positioned itself as an advocate for change in this election. Allan reminded Observer that “Shake Up” is still “in the process of forming [their] priorities” which will continue as they add candidates. However, Allan expressed a desire to move beyond the current Executive’s focus on internal reform, structural change, and professional staffing. He explained to Observer that “shaking up” ANUSA means changing “how ANUSA communicates with students”.

Engagement has been a significant issue in ANUSA this year, with multiple General Meetings struggling to meet quorum requirements. Allan questioned whether the current “professional organization” of ANUSA is “best placed to serve students”. ANUSA has seen a transition of work from elected representatives to professional staff in recent years, including communications with the student body. Allan argued that while the internal reorganisation of the past few years is important, he wants to “turn the organisations mind” to creating an Association where “all students feel like ANUSA is a place for them”. Allan summarised his campaign:  “Maintaining a professional tone comes at the expense of connecting with people.”