A fanfare of destruction will soon disrupt Copland area classrooms and academics, ANU officials have warned, due to the demolition of the Manning Clark Centre.

ANU promised students the demolition process would be as quick and quiet as possible, but Deputy Vice-Chancellor Marnie Hughes-Warrington said there would be “some parts where it’s a bit noisy”. “A bit noisy” might be an understatement: ANU has offered noise-blocking headphones to staff who hold offices within the Haydon Allen, Hannah Neuman and other Copland precinct buildings. The University assured students they were working  “as fast as we can, but not recklessly”. 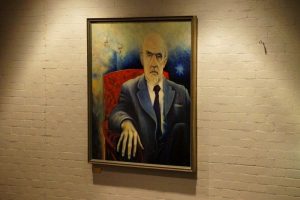 The Portrait of Manning Clark in its old location.

Demolition of the old lecture hall has already begun: ANU said carpets and interiors have already been removed. Access to the Centre, as well as the Concessions building and Union Court Amphitheatre has been blocked. Deputy Vice-Chancellor Marnie Hughes-Warrington confirmed that the notoriously large-handed painting of Manning Clark himself has been placed in storage, for installation in a future venue.

Lectures previously held in Manning Clark are now running in Llewlyn Hall and in split classrooms with streamed video. The Union Court Redevelopment will add almost as many seats in lecture theatres as Manning Clark currently holds.