Lunch at the Pop-Up Village will cost students $4 more, on average, than in the old Union Court, Observer’s analysis shows. The cost of beer remains roughly the same.

A Union Court lunch, at a median average, used to put you back $8.75. A meal at Pop-up, however, comes to a median average of $13.00 – an increase of 48%. This is not a uniform change. Stores which have transitioned – like the Campus Bakery, Zambreros, and the UniCorner Cafe – have kept their prices stable. The large price difference is due to the loss of several cheap lunch spots such as ANU Bar, Subway, and Pajenkas, combined with the addition of several expensive options, like Brodburger and Mr Papas. 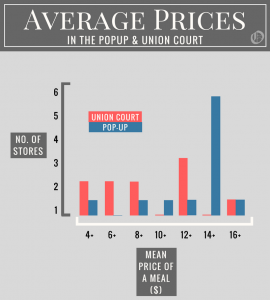 While the average lunch price has gone up a lot, the good news is the cheapest options are still available. When comparing the cheapest meal at each store, rather than the average meal cost, the Pop-Up is less than $1 more expensive than the Union. This represents an increase of about 16% ($7 as compared to $6.03). The absolute cheapest options also haven’t changed prices, there’s just less of them. In other words, price increase isn’t across the board; instead there’s a greater diversity of expensive options, and a thinning down of cheap eats. 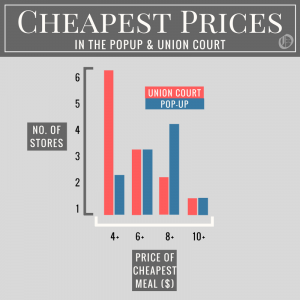 Pop-Up prices are remarkably similar, however, in one important part of university life: alcohol. ANU Bar was slightly cheaper than its replacement, Molo Live, but the difference between the venues is a meagre 40 cents. The average standard drink at ANU Bar cost $6.45, while at Molo Live it’s $6.85. Once again, this distinction comes from more options in the upper end, rather than overall higher prices: the cheapest drinks for both bars are $5.

The Pop Up is more expensive than Union Court Refectory. But the Pop-up does give more options to students at the top end, while thinning the field of cheaper options. Students have lost cheap bar food, but gained HSPs and pho on campus.

We acknowledge our methods may not be perfect – we’re not stats students, and so expect some angry emails from them. But we’re confident our methods are good enough to confidently state that prices have increased substantially overall.

Observer collected and took the mean price of lunch at each store, and then took the median of those averages. The median was chosen to better represent the nature of the diversity of options available to students, rather than allowing a few outliers to alter the metric – for example, Vivaldis had a very high average price which would obscure the large number of low-priced meals in a mean average of Union Court.

On later consideration, we determined that the median price of each store may have been a better metric, but mean and median averages for individual stores were extremely similar regardless, as most food prices for stored were closely clustered and evenly distributed. For the cheapest lunch, we took the cheapest option at each store, and took the median of those options.
A ‘lunch’ was described as a purchase which could constitute a meal. We spoke to students to determine what they would purchase for a meal – most were obvious, however sushi, the Campus Bakery and ANU Bar presented some issues. After many conversations we determined that a pie or sausage roll constitutes a meal, and two sushi rolls are a meal.

You can find our data here.

For any questions, corrections or other communications please contact [email protected]