PARSA electoral ticket ANyou has received electoral penalties for multiple potential offences, with a candidate temporarily suspended from campaigning and two Facebook posts ordered to be altered, Observer understands. PARSA Returning Officer Ian Walker took action yesterday after a complaint was made earlier this week by a rival candidate. Observer can confirm that money was offered in the form of ‘red packets’ in an attempt to obtain votes.

Complaint alleges money given to voters 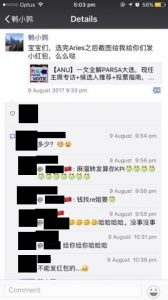 “Once you’ve voted for Aries take a screenshot and I’ll send you a red packet,” the top post reads.

Education Officer candidate Aries Meng, from the ANyou ticket, has been temporarily suspended from campaigning, sources confirm. While it is unknown why exactly this suspension has been put in place, Observer can confirm that a complaint was made to the Returning Officer including allegations that Meng attempted to bribe voters.

Money was offered in an attempt to procure votes for Meng, Observer can confirm, but it remains unclear how much, from whom, or whether Meng was directly involved. “Once you’ve voted for Aries take a screenshot and I’ll send you a red packet,” reads a translated message sent on WeChat, a Chinese-language social media application.  ‘Red packets’ allow users to transfer virtual credits to others, which can be withdrawn as real money from the app. The items are traditional gifts in Chinese culture, generally only amounting to a few cents each. Any financial gift in exchange for votes violates PARSA’s electoral regulations.

The complaint submitted to the Returning Officer alleges that the bribe was offered by an employee of the company NewStar. The NewStar employee whose involvement is alleged is understood to be a former ANU student. The Clubs Council has previously warned clubs against running events with NewStar. “We are concerned that the company does not have students’ best interests at heart and is targeting some of the more vulnerable students among us,” said Naomi Peck, International CC branch officer, earlier this year.

Under PARSA’s electoral regulations, it is an offence “to offer or provide gifts, bribes, money, food, drink or any other enticement to any person to influence the person to exercise their vote in favour of the candidate.” It also is an offence for “a person who is not an eligible voter to campaign on behalf of a candidate or ticket during an election”

The PARSA Returning Officer, Ian Walker, said that investigations were ongoing into the matter and he could not confirm a final decision. Paul Taylor, Presidential candidate for ANyou, confirmed that the Returning Officer was yet to inform him of the outcome of the complaint.

These events are reminiscent of a matter at Sydney University during their Board elections earlier this year. Honi Soit reported that Zhixian Wang was excluded from and then reinstated to the election after sending a red packet worth $2 to a group on WeChat. The current case differs in that red packets are usually sent on a group chat in exchange for someone advertising a message, whereas in this case they appear to have been sent individually.

Aries Meng did not respond to requests for comment.

The ticket claimed around one million dollars, or 74% of the PARSA budget, is spent on social activities, a funding arrangement the ticket questioned. The primary source for this claim was the Association’s SSAF bid, and the largest portion (59%) came from a budget line item of “supporting the administration of a club whose members are students”. This funding does not go directly to events – much is used on payment to staff, administration and other resources.

The Returning Officer said that “the information, especially in relation to what was labelled ‘social’ and ‘administrative’, was misleading”. ANyou “had not taken proper account of the nature of filing SSAF reports and of the consistent and appropriate oversight and administration of funding allocations by the University and the PARSA Office”.

The statement has since been removed from ANyou’s Facebook Page and website. ANyou Presidential candidate Paul Taylor said the ticket “in good spirit” had “hidden that post until we agree an appropriate rewording and get agreement from the whole team before reposting it with comment which we intend to do this week.”

The ticket planned to nominate a student for Indigenous Australian Officer, and had already created promotional material including them before the nomination was rejected on Friday for late submission. As a result, a promotional video naming her as the nominee for the position was taken down and amended. “We updated our social media and website to reflect that [the student] is our Indigenous Australian spokesperson, and not a candidate, so the postgraduate community would not be confused,” said Taylor.

Valerie Ng contributed to this report.