The UniLodge President has proven his allegiance to Lodge in a way never before seen at ANU. He has eternally etched his commitment to the Lodge cause on his body, in the form of a tattoo.

The UniLodge President promised UniLodge residents that if they bought more tickets for Big Night Out than any other hall, he would decorate himself with a Lodge-themed tattoo. After UniLodge was successful in this goal, he held true to his word. The tattoo was etched on Friday 18th August. The UniLodge President said the tattoo was “a way to give back to the lodge community”. He further explained, “when people ask what my legacy is as president I don’t have to tell them, I can show them.” 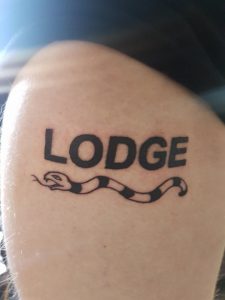 The tattoo resides on his upper thigh, and bears the slogan “Lodge” in full capitals, along with the UniLodge mascot of the snake.

The question now on many lips is whether other residential college presidents will match the clear dedication of their Lodge counterpart. Other halls presidents don’t seem keen to follow in his footsteps: Matthew Bowes, Bruce President, said whist he “currently have no plans to take part” he supports the UniLodge President and hopes “that the ANU Administration, including Brian Schmidt and Lynda Mathey, take note and emulate his actions”. B&G President Anya Bonan pointed out that there are other ways to “put your body on the line” for your college, including “running 35 events in 9 days in O-Week”

The Observer editorial board sincerely hopes Vice Chancellor Brian Schmidt follows suit with an ANU-themed tattoo in the near future.