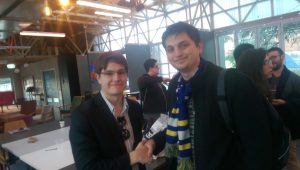 Right and left-wing campus elements both planned takeovers of the Men’s Network (MN) this Friday. Feminists of all genders came to the Annual General Meeting (AGM) in force, but the right-wing, pro free-speech operation was a relative non-starter – resulting in the election of Eben Leifer as President. In response, a number of conservative students have formed a rival page, ANU Men’s Support Network.

Leifer, a straight white man, self-described feminist, and former President of ANU Labor Left, mobilised a strong voting bloc to win the Presidency. Leifer told Observer,  “I made it known to several people I was going to run.” MN is not autonomous by design, and any member can vote at the AGM. Many students signed up for membership on the day, and there were complaints from defeated conservative Presidential candidate Brandon Hargraves of “branch stack[ing]”. However, those elected to the executive had all been active members some time prior to the AGM.

Leifer’s plans to take the presidency were motivated, he says, in reaction to plans from conservative students. The public call for conservatives in MN came from Jamie McHugh, who posted on the page to “encourage people to turn up at this AGM” specifically to stop former Secretary Yichen Hu from being elected to the executive. McHugh said Hu “epitomizes everything wrong with what the Left on university campuses has become.” Hu did not run for any positions.

Behind the scenes there was friction within the right between a free speech agenda  and more extreme anti-feminist sentiments. Hargraves, ANU Liberal Club Social Officer Thea Winter, and others originally contacted McHugh to get him involved in plans to dominate the elections. Hargraves and Winter soon found him too extreme for their tastes, with views “on an entirely different level”. Hargraves described McHugh as an “anti-progressive, entirely reactionary”. Hargraves saw his own aim as eliminating “gender politics” from MN threads and allowing “free discussion”.

McHugh, despite nominating for a number of executive positions and calling for conservatives to mobilise, did not attend the AGM himself, and ultimately withdrew his nominations. Observer can reveal this was at the request of Hargraves and Winter who told McHugh he wouldn’t “be able to find any support and he’ll give us a bad rep [sic]”. In a comment on his post calling for conservatives to mobilise, McHugh had attacked another MN member using a transphobic slur, which also stigmatised mental illness.

The meeting also elected an Executive which is significantly queer*, feminist, and non-male. Nick Blood and Hannah Zurcher, current Executives, were both re-elected as Vice President and Gen Rep respectively, along with Tom Culley as Secretary, who ran for ANUSA Gen Rep last year on a platform of men’s mental health. Ariel Scott and Kat Reed, current and former Queer* officers respectively, will also hold positions. This leaves the Men’s network Executive with half of its members openly queer* and half openly non-male.

In response to the result, a number of members of MN including Hargraves and Winter set up a rival page, ANU Men’s Support Network. The Page has a ban on ‘gender politics’, which Hargraves equates with ‘third wave feminism” which is “very heavily politically divisive”. At the same time, when asked by Observer, Hargraves would not commit to any kind of moderation of posts that indicated an acceptance of domestic violence.

Moderation of the MN page became a major issue of the election. Nick Blood, re-elected Vice President, took the “shouting down” of McHugh’s comment by members as indication that the group could self-moderate, requiring less executive intervention. Newly elected President Leifer, on the other hand, described the transphobic comment as a “flagrant personal attack intended to be inflammatory” that “needed to be moderated”.

One of Leifer’s first acts as President violated the rules of the page, in posting screenshots of a conversation he had with a member of MN without consent. Leifer justified the action on the basis that the person concerned had blocked Leifer on Facebook and was not contactable. The person denied that he had blocked Leifer. Winter questioned whether MN could “act as a safe space” if the conduct was indicative of the new executive’s approach. Zurcher immediately responded to the violation.

Leifer committed to working with ANUSA’s autonomous Departments during his term, noting that if men face difficulties, “how are [other groups] going to do.” Blood noted previous work with the Women’s Department, and signaled a desire to work with others, specifically Queer* and ethnocultural.

Jamie McHugh was contacted for comment, but has not replied at time of publication.

Correction: The article originally stated that Leifer initially claimed to have obtained consent, but later retracted this claim. However, Leifer did not claim that the person concerned had consented that their message be posted. We apologise for the error.