A virtual reality walk through the Union Court Redevelopment accompanied celebrations of future plans and current achievements at the ANU Open Day yesterday. The experience contains many features shown in the already available video, but provided a more immersive display with increased artistic detail.

The virtual tour is presented on an Oculus Rift with an explanatory voice over. The tour, available to students at the Prompt Gallery, is able to seat four at a time, and also contains information about the redevelopment. While the walk through provides little new information about the project, it does show off the portrait of Manning Clark – informally known as the creepy hand painting – and the new ANU bar, named ‘Hide and Seek’. Appropriate to the name, no other information is available about this new bar, and it’s unclear if this was simply a use of artistic license. 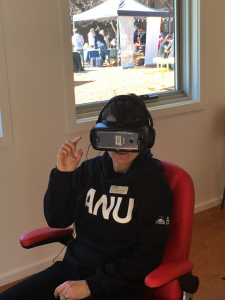 The Deputy Vice-Chancellor enjoys the wonders of technology.

This event occurred in conjunction with another move towards modern technology by the ANU with the new Open Day app. Designed to provide information to future students and allow them to plan their open day experience, it had an easy to navigate and modern design. While it had a great deal of information about the college events that would be running, there was little about the available clubs and societies. The feature was created by the Academy of Interactive Technology (AIE), and presented with the assistance of Amanda Cox, the Deputy Manager of Communication for the Joint Colleges of Science at the ANU. It was available throughout the day to a consistent stream of prospective students and their families.

The Redevelopment is currently still in the demolition stage, although all major buildings, including Manning Clark and the Arts Centre remain standing. However, fences have been raised around the site, and a new ramp to the Chifley library and stairs to Melville Hall are now in place. Walkways and signs within the area have been demolished, notably the Manning Clarke gateway. North Road has also transitioned into a one-way road to allow for truck access, with barricades put in place for pedestrians.

The new setup has raised some concerns, with students complaining about a lack of bike racks and extended walking times. The original demolition documents suggested the possibility of a disability access lift in the AD Hope building, but no further progress has been made in this area.

The current setup is likely to remain unchanged until the beginning of 2019, when integration into the new complex will occur. In response to the ongoing turbulence, the university has said they are taking a ‘no gain without pain’ approach to the issue.

According to the ANU website, the showcase will be available to current staff and students next week at Prompt Gallery in the Pop- Up village during the following times: