Throughout 2017, a series of notes containing threats and homophobic messages were placed under and on the door of a queer* resident of Ursula Hall. The student left the Hall in October, claiming that the Hall had failed to curb the behavior and that he feared for his safety.

In April 2017, a note containing threats and homophobic insults was slipped under the door of Alec Walter, an ANU student who had recently begun his time at Ursula Hall. Walter said the note arrived “while I slept, during the middle of the night”.

According to ANU, after being informed of the original incident, Ursula Hall staff “took immediate steps” to address the issue, and offered “full support”. The Hall initially referred Walter to the ANU Health Service, and Head of Hall Dave Segal wrote a public letter to the Ursula community. The letter decried the behaviour and stressed that if they were discovered, a the perpetrator would be in breach of Ursula Hall policies and face removal.

Walter, however, described the actions of the Hall as inadequate. ANU claims that Walter was “included in decisions” about methods to solve the issue, but Walter told Observer that his contributions were largely ignored, and he often was not consulted. Most notably, he claims he was not given input on the content of published letters to the community. He also described the referral to ANU Health as “not great”, given the waiting times.

Walter proposed the installation of security cameras to prevent the behaviour – a suggestion which was rejected by the Hall. When asked, ANU cited “a range of practical and privacy issues” for the rejection. Both Burton and Garran Hall and parts of Unilodge contain security cameras, though not in positions which provide direct views of residents’ doors.

Over the next eight months, the harassment continued, despite the Hall’s efforts. Multiple letters containing threats and slurs were placed under Walter’s door during the night, and messages were scrawled on his door. According to ANU, Ursula Hall “investigated the incidents”, but were “unable to identify the perpetrator.”

After failing for several months to identify the source, throughout which the events increased in frequency, on 12 August the Hall promised that any resident who could provide information on the identity of the harasser would be offered an unconditional returning spot to the Hall – a sought-after item at a time when returner prospects were uncertain. This promise, Walter claims, was made against his wishes, and he identified the potential for the Hall to be offering a guaranteed spot to a resident who had previously protected his harasser. The letter of 17 August also included a challenge to the author of the anonymous notes to raise their concerns in-person with Segal. These actions did not succeed in identifying the perpetrator. 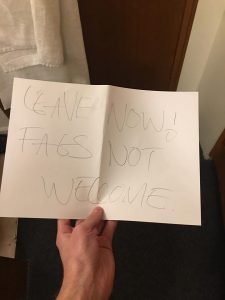 2017 Ursula Residents’ Committee President, Charlotte Mayberry-Rupert, published her own letter soon after, criticising the behaviour and commending the Ursula community for its rejection of such behaviour.

During last year’s postal survey on the question of marriage equality, the harassment accelerated, including writing “vote no” on Walter’s door sign. Finally, fearing for his safety, Walter left the hall unofficially and stayed with his partner at John XXIII College. Upon learning this, Ursula Hall offered to move him to another room in Ursula, the location of which would not be advertised. Walter said this “wasn’t a help” as the harasser could easily identify his new room. Instead, he finally requested transfer to a new hall, saying he “shouldn’t have to be focussing on my safety… the college has a duty of care”. Transfer was granted three weeks before the end of Semester 2.

Walter described leaving Ursula Hall as “greatly upsetting”, telling Observer, “College is supposed to be a place where you find yourself. You shouldn’t have to be scared.” He noted that the Ursula community overall had been incredibly supportive, saying, “Ursula Hall is full of such a diverse range of people, who came to be family”. Walter also expressed concern for queer* students remaining at Ursula Hall, and said more support was required in future.

ANU said Ursula Hall is “committed to working to prevent similar incidents”, and that the University “understands the incidents were distressing”. They confirmed the actions were “totally against” ANU’s code of conduct, and promised “firm action” if the perpetrator were found.

To date the perpetrator has not been identified. To Observer’s understanding, no further incidents have occured at Ursula Hall since Walter left.

If you or anyone you know has been affected by harassment, you can speak to the ANUSA students’ assistance office, or ANU Counselling.

If you have any information regarding harassment or poor behaviour at residences which you think may be newsworthy or merit further investigation, you can submit an anonymous tip, or contact the news team at [email protected]