ANUSA today ended Market Day early, citing “safety concerns” and “extreme conditions” in the face of high winds. According to eyewitness reports, students were hit by falling marquees, with at least one student reportedly injured.

At around 2:15pm, volunteers from ANUSA announced that the event was being closed owing to safety concerns. The event was scheduled to run until 3pm. ANUSA President Eleanor Kay explained that ANUSA was “shutting down” market day due to the “extreme conditions”. According to the Bureau of Meteorology, wind gusts reached up to 70 km/h around 2pm.

The reportedly injured student was hit by a marquee from the ANU eSport stall, which was among many tents flipping due to the wind, according to eSports Officer Ashley Wang and eyewitness Matthew Doan. Doan told Observer that the marquee hit the student on the head or jaw. ANUSA President Eleanor Kay said,  “we have had first aid incidents, those remain confidential.” 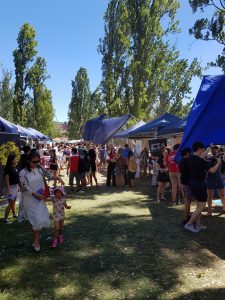 Before this incident, at approximately 12:20pm, four marquees collapsed onto the main thoroughfare on University Avenue. No one appeared injured and the event continued. The wind continued to pick up at this point and various stalls took steps to avoid injury; some took their marquees down, while others had their volunteers physically hold theirs up. According to information sent to stallholders, marquees were not to be pegged down, in order to preserve the grounds.

Despite these setbacks, attendance was good, with Kay telling Observer that three to four thousand students attended the event. Burgmann Toga party tickets will now be sold at the door due to the interruption to their sales at market day. 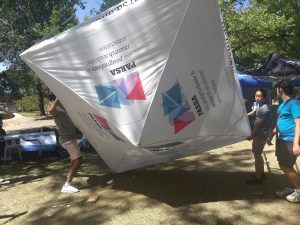