Rents Raised for Residences in 2018

Students at ANU operated Halls of Residence will face fee increases and colleges in 2018. The price hikes vary significantly, from a 2.24% increase for residents of Burton and Garran Hall, to a 14.17% increase for Bruce’s self-catered residents, due to the removal of a substantial discount. 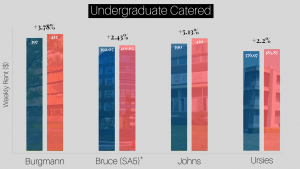 On average, there will be a 3.54% price increase from 2017 to 2018 for catered residential colleges, while self-catered colleges (excluding UniLodges) will charge 5.34% more. Postgraduate halls will experience an average 2.13% increase. 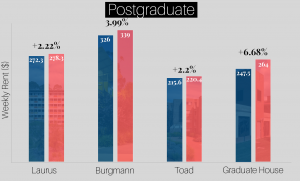 ANUSA told Observer they were “concerned about the increase in residential hall fees as they impact on the accessibility of the on-campus experience.” They said that they have also “followed up this issue to the ANU and [are] continuing to do so.”

In a statement from a spokesperson, ANU stressed that fee increases were lower than usual. “Room tariff increases for most accommodation have been limited to 2.5 per cent and in line with CPI [Consumer Price Index] inflation. In previous years, increases have ranged from 4.5 to 7.5 per cent,” said an ANU spokesperson. “The lower increases for 2018 are a result of the 30-year concession agreement finalised in August 2016 over nine ANU student residences.”

In 2017, new self-catered Bruce residents paid $230.70 a week, however self-catered residents in 2018 will pay $263.39 per week, a 14.17% increase. An ANU spokesperson explained that “for 2017, a small group of new residents in self-catered accommodation at Bruce Hall enjoyed a one-off discount to the published tariff, which will be discontinued in 2018.” Without this discount, the residents would have paid $257 per week in 2017. 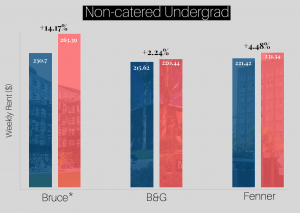 Fenner Hall residents also experienced an increase above CPI. A standard room will increase in cost by 4.48% to $231.34 in 2018. An ANU spokesperson explained the rise resulted from “CPI and a building levy to remain in Fenner Hall, as agreed with the community in 2016, until they move onto campus.” This levy was established to cover maintenance of the aging Fenner Hall building, as part of a deal for Fenner to remain in their current site until 2019, instead of ANU’s original plan to move the hall in 2017.

Burton & Garran Hall maintains its place as the most inexpensive ANU-run accomodation, at $220.44 per week.

Note: ANU and Unilodges have provided inconsistent information regarding rates, and as such have not been included in this analysis. Observer has contacted ANU and we will follow up with further information when available.