The State of Our Union: The ANU Union Explained

The ANU Union used to be known for its bar, and being the namesake of Union Court. The Union today faces declining revenues and limited campus visibility, following the removal of the Union building. They’re not ANUSA, PARSA, or the Clubs Council, but you’re probably a member – and you can vote at their upcoming Annual General Meeting on Thursday 31 May. But what actually is the Union, and what do they do for students today? This is the Union, explained. 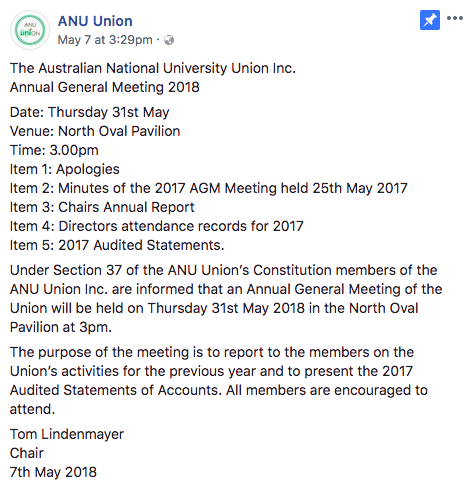 What is the Union?

Established in 1965, the ANU Union is a student union with the purpose of providing social facilities and support to ANU students. Prior to the redevelopment of Union Court, the Union ran ANU Bar and the Union building housed many of the businesses on campus. Without a bar or a building to run, due to the Kambri redevelopment, the Union now faces a significant financial and organisational crisis. Nevertheless, Current Union Chair Thomas Lindenmayer told Observer, “The Union remains very optimistic about its future,” but that it has “had to do some soul-searching following the redevelopment”.

What does the Union do?

The Union Constitution describes the Union’s function as providing “high quality, cost effective facilities and services for its members”. The Union is further tasked with providing a recognised meeting place and social centre for its members. This includes supporting clubs and societies through an annual $10000 contribution to the ANUSA Grants and Affiliations Committee.

Other constitutional functions include promoting the intellectual, social and general welfare of the ANU community. The Union is directed to carry these out, with help from ANUSA and PARSA.

However, without a social space for its members or a physical presence on campus, the Union cannot enact these functions. Additionally, the Grants and Affiliations Committee no longer exists – it has been replaced by the Clubs Council, which does not receive any Union funding.

To join the Union, you must be either an undergrad or postgrad ANU student, a past or current member of ANU Council, employee of the Union or an employee of ANU. All new students are given the option to join the Union when enrolling at ANU. Unlike ANUSA and PARSA, the Union is an opt-in organisation that students must personally decide to join. There is no cost to join or leave.

So, what’s the fuss with ANU Bar?

The Union described ANU Bar as “a place to socialise and relax” for students, alongside being “Canberra’s leading live music venue”. Throughout its 30 year history, ANU Bar hosted the Black Eyed Peas, Nirvana and Bliss n Eso, to name a few.

The Union was not granted renewed tender to ANU Bar in 2017, due to the Kambri redevelopment. The Union was not given control of running the Pop-Up Bar, as the contract instead went to Molo. At the time, Lindenmayer described the Union as “in survival mode.” Though the Union has not commented on the financial ramifications of losing ANU Bar, it has evidently made an impact.

The Union took ANU to court in July 2017 in a dispute over post-redevelopment relocation. The Union and other businesses had to vacate their spaces so the buildings could be demolished as part of the Kambri redevelopment. Lindenmayer told Canberra Times at the time that while Kambri will benefit the student body, it “should not come at the cost of the ANU Union”. ANU reached a settlement with the Union in August 2017, although the terms of this remain confidential. A joint statement released by ANU and the Union last August said both parties were “pleased to announce that they have come to an agreement to help move towards the relaunch the ANU Union with an exciting new operation program from 2018”.

From the period of 2015 to 2017, Union revenue has declined by 56%. According to Union annual reports released during this period, 2015 revenue accounted for $4,019,060 whereas 2017 revenue had dropped to $2,261,899. Though Union revenue has halved, Lindenmayer told Observer, “The Union remains very optimistic about its future.”

Lindenmayer appears unphased by this apparent downward trend. “Auditors were very satisfied with the current financial position of the Union,” he told Observer.

Following their relocation from Union Court and the loss of ANU Bar, growing financial troubles and a shrinking campus presence indicate the Union faces a severe functional crisis. When asked about the future of the Union, Lindenmayer told Observer, “We obviously don’t have the same presence on campus that we used to. Whilst we are currently going through a rebuilding phase organisationally, we hope to be able to re-engage with the student body shortly.”

The Union’s issues could potentially be alleviated if ANU grants the Union a presence in Kambri, such as a new bar. Lindenmayer told Observer in April that “The Union is hoping to have finalised its arrangements with the University in the coming weeks, and will provide an update to members as soon as this has happened.”

During the March 2018 elections, candidates for board positions within the Union did not make any campaign promises or provide any details on their visions for the Union. All were elected unopposed. Observer has still not received information regarding promises or plans from the new board members.

Who sits on the Union Board?

The Union executive team comprises of 9 current members. These include one representative appointed by University Council, the Vice-Chancellor, ANUSA and PARSA respectively.

There are currently 5 members who sit on the Union Board of Directors. These members are current as of elections held on 6th March 2018. It is important to note, however, that the Union website has not been updated to reflect these governance positions.

Observer understands that 4 of the 5 Directors are affiliated with Labor, with Howarth running as an Independent. Magyar has held executive positions with the National Union of Students.

For more information on the current Board of Directors, read our article on the election here.