Its Week 8 and assessments are well underway, but at least we get a long weekend to recover. If you were too busy keeping on top of your studies this week, here’s the news you might have missed.

This week marks the silver jubilee partnership between the government and the ANU Internships Program (ANIP). The partnership aims to provide for networking opportunities between students, politicians, the Australian Public Service and foreign governments for the past 25 years.

The trial of Alex Ophel continued throughout the week. This week the court called witnesses, including several psychiatrists. Observer will continue the Ophel trial daily blog throughout next week with more updates. Content warning: this article may contain mentions of detailed and disturbing violence, sexual assault, mental illness and suicide.

On September 25, SRC 7 took place. Topics concerning NUS’s fulfillment of ANUSA’s KPI’s, Honoraria Committee guidelines, the media policy and the active role of the NUS International Officer were all discussed at the meeting. The meeting only took a total of 45 minutes, making it the shortest SRC of the year.

ANU Women’s Department presented a new logo, a red rose on a white background. Designer of the new logo, Abbie Holbrook said that “the petals coming together create something beautiful”, and represent the group and the “different experiences of being a woman”.

On September 26, ANUSA’s Education Committee hosted Jodie Lee-Trembath to discuss her research into the anthropology of universities. Approximately 10 people attended the event and came prepared for a lengthy Q&A discussion resulting in a 45 minute extension of the event.

The National Capital Model United Nations (NCMUN) was held at ANU this weekend. Over 140 ANU students attended the three day conference to debate a range of issues including militarisation in outer space, the Kurdish state and the systematic use of technology to achieve the sustainable development goals. Observer’s own Jess Whiting and Eliza Croft were part of the media delegation, representing the Press Corp and Betoota Advocate respectively.

Observer announced its general meeting for Wednesday October 17 at 6pm. Various roles will be up for election. 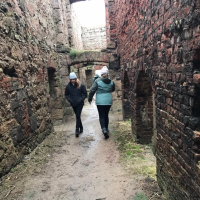