Work has commenced on clearing land for a new student accommodation complex, currently named Student Accommodation 8 (SA8). The accommodation will be next to Burgmann College and house approximately 900 undergraduate and postgraduate students. 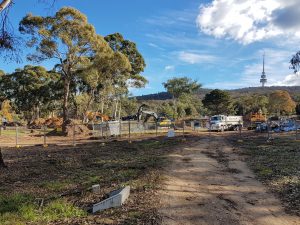 Work has begun on clearing the site next to Burgmann College.

SA8 will be built on a site the University has termed “Beyond Burgmann”. As the name suggests, this is next to Burgmann College on Daley Road, adjacent to Sullivan’s Creek.

The University has emphasised that SA8 will have a unique design. “SA8 is a new type of student accommodation to what [ANU] has developed in the past,” Chief Operating Officer Chris Grange said. Grange explained that the complex will be “built around a village green”, with “common spaces, a gym and cafes”.

While plans were being developed for SA8, the Interhall Council of Presidents (IHC) prepared a report with recommendations based on a student survey. “Much of the feedback was centred on how important design of the building is in influencing the ability to interact with others and shape the community,” the report says. The report notes that many respondents wanted a college gym, and thought it was important to have both indoor and outdoor communal spaces. 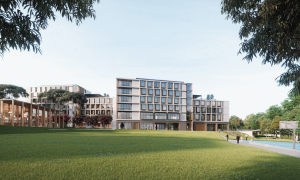 SA8 will be built around a “village green”.

The IHC report also highlights that “larger colleges have the potential to hinder community building”. SA8 will accommodate almost 900 students across five buildings – 670 undergraduates in three buildings, 195 postgraduates in two buildings, and 32 two-bedroom units for students with families. Grange said these buildings will be “smaller and more communal” than ANU’s current offerings.

The accommodation will be self-catered, with some rooms being apartment-style and others having communal cooking facilities. No information as to expected room costs is currently available. 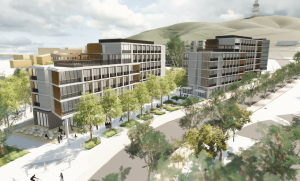 The complex will include rooms for undergraduates and postgraduates, as well as units for families.

Vice-Chancellor Brian Schmidt has previously put forward the idea of shared rooms to lower costs. At a Pizza with Brian event last year, Schmidt said shared rooms would “be looked at for some of” SA8, as they could make rooms approximately 30% cheaper. However, there do not appear to be plans for US-style shared dorm rooms in SA8. The complex will include some postgraduate rooms designed for couples, like Ursula Hall’s Laurus Wing currently has. 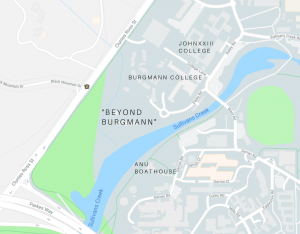 SA8 will be next to Burgmann College, and the project will include a new footbridge and boathouse.

The Campus Planning Committee decided on the “Beyond Burgmann” location in March 2018. Other locations considered included the Vice-Chancellor’s residence on Balmain Crescent, Lennox Crossing, and the corner of Ellery Crescent and Marcus Clarke Street. Grange said the site was chosen because it “allowed for the creation of a low density, low rise student village”, which would “add more diversity” to ANU’s student accommodation options and allow for families to be accommodated.

Grange also said that the chosen site would allow SA8 to “overlook iconic Canberra vistas like Lake Burley Griffin and Black Mountain”. The development will also include a new boat shed for the ANU Rowing Club, and a new footbridge across Sullivan’s Creek.