ANU students gathered on the Kambri lawns at 11am today to protest climate inaction. The contingent then marched down Childers St and through Civic to join the main rally in Glebe Park. Members of groups including Extinction Rebellion, ANU’s Environmental Collective and the ANU Socialist Alternative gave speeches addressing the government’s failure to act on the “climate catastrophe”. 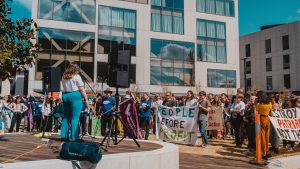 ANU students and staff gathered in Kambri ahead of the main strike.

At the event in Kambri, prominent activist and Socialist Alternative (SAlt) member Kim Stern opened the rally. Stern called for “shame on the federal Liberal government and also the Queensland Labor government” for their support of the Adani Coal Mine and said that society needs a “systematic overhaul” in order to effectively tackle climate change. Stern introduced Year 12 student Tess Carlton. She described the importance of action by university students in opposing things such as the Vietnam War and the invasion of Iraq, and stressed the need for young people to “stand up and fight for our futures”. She also stated that “good people break bad laws” and that whilst protest movements “don’t always work”, they are “the only thing that does”.

National Tertiary Education Union (NTEU) representative Jeremy Stevens spoke, saying, “Your time and effort have put us on the right side of history.” He said that the NTEU had tried to get universities to support the Strike such that students and staff would not be penalised in terms of marks or leave balances for attending, but that “unfortunately, what we had hoped might be large scale and unanimous support…was not to be”.

Emma Roberts of the Extinction Rebellion group also spoke at the rally, stating that “governments and corporations are lying to us and refusing to act”. Roberts stated there would be an Extinction Rebellion protest on 27 September, where activists would “swarm Civic”. The group will also be holding also be a non-violent disruption of the Commonwealth Bridge on 7 October. She encouraged those present to continue to be involved in non-violent disruptive actions, saying “Just like storming Area 51, they can’t stop us all.” 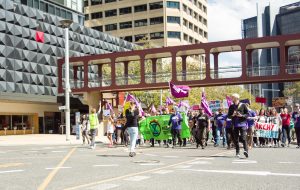 Students disrupted traffic on Alinga St on the way to Glebe Park.

After these speeches, the protesters walked down University Avenue, chanting. They then proceeded to walk to Glebe Park, disrupting traffic on Childers Street and Alinga Street. More protesters, including a number of school students, joined the group as it passed the bus interchange and the light rail.

At the Global Climate Strike Rally in Glebe Park, thousands of students, parents, and activists participated in chants against government climate inaction. Speakers included a Year 7 student, who said, “as a student, I am terrified for our generation.” A Year 12 student also spoke, along with a representative from UnionsACT who argued that “workers are on the front line” of the impacts of climate change and that “there are no jobs on a dead planet”. After the speeches and practice chants, the group marched around Civic. 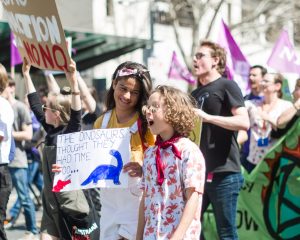 School students from across Canberra missed class to attend the strike.

Several academic Colleges and Schools at ANU, such as the Research School of Psychology, have explicitly stated that students who missed class to attend the strike will not be penalised. However, it is not a University-wide measure, with an ANU spokesperson telling Observer that the ANU “[knows] that those who participate [in the protest] will do so mindful of any long-standing commitments they have on campus”. The spokesperson also said that “[the University] takes climate change seriously” and initiatives such as the recently announced campus master plan makes commitments to “making the campus carbon neutral with 100 percent renewable energy”. This comment is largely similar to their statements made on previous climate action.

This protest is the third major rally of the year, with ANU students participating in the Canberra Strike 4 Climate protest on 15 March, and the 9 August Walkout for Climate Action.