Senior students may remember, even in these troubling times, the portrait of Manning Clark that once adorned a hallway in the now demolished building that was dedicated to the late historian – The Manning Clark Centre. Notorious for the prominent hand that seemed to reach out to the viewer, the painting provided humour and comfort to students as they entered the Manning Clark Lecture Theatre. Since the demolition of the building in 2017, the infamous portrait hasn’t been seen. Observer has tracked down the whereabouts of the portrait, and hopes that one day students can again marvel at the long fingers of Manning Clark.

Who Is Manning Clarke?

Former ANU Chancellor Gareth Evans called Clark “Australia’s best known and loved historian”. In an obituary published in the ANU Reporter in 1991, Clark was described as the man “who took our history and lifted it to another level because he made it truly Australian”. Clark is best known for his six volume History of Australia, which is recognised as the most famous comprehensive history of Australia. However, his work has not been without its critics, due to his association with the political left. These critiques included allegations that he was behind the ‘black armband’ view of history that was central to Australia’s ‘history wars’, a viewpoint which was highly critical of settler-colonial violence towards, and the dispossession of, Indigenous Australians. He was even accused of being a Soviet spy on the front page of the Herald Sun, a newspaper owned by one of his former students from his days as a school teacher at Geelong Grammar, Rupert Murdoch.

Clark was a Professor of History and Professor of Australian History at ANU from 1960 to 1974. He then held the title of ‘Emeritus Professor’ from his retirement until his death. When naming the newest lecture theatre in the Kambri Precinct after Clark, Evans spoke of his “enormous contribution to the ANU”.

He was remembered “as a teacher, a researcher, a writer, a contributor to the national public policy debate on multiple issues and simply as a great iconic Australian”. Evans added that Clark “was for a long time given very visible bricks and mortar recognition on the ANU campus”.

Clark became a recipient of the Companion of the Order of Australia in 1975, and was recognised as Australian of the Year in 1980.

The Portrait’s Rise to Campus Fame

The portrait was painted by Australian artist Neville Dawson in 1983 as an Archibald Prize submission, and was then gifted to the University. A University Spokesperson told Observer that “according to our records, this painting is not particularly liked by the Clark family, who requested it not to be hung around arts areas”. The painting had to undergo restoration in the 1980s after an ANU student threw five darts at it. The student paid a $150 fine.

The portrait of Clark appears to have gained widespread recognition while it was hung in the now demolished Manning Clark Centre. A Facebook page called Manning Clark’s Creepy Hand, established in 2012, featured a close-up of the hand as its profile picture. The page has garnered 644 likes. However, with the exception of its profile picture, no content has been posted on the page since its creation.

ANU Schmidtposting posts from 2017 reveal more of the portrait’s popularity. A meme posted on 1 August – just days before Observer reported on the demolition of the Manning Clark Centre – received 338 likes, with the original poster asking “whatever will happen to this painting?”. The meme featured a picture of the portrait with the caption “trying to forget him but he’s all you think about”. A comment on Observer’s article about the demolition of the centre asked users “who would win in a fight: Manning Clark’s creepy hand or Hancock’s judgemental cat?”, referring to another painting at ANU, of WK Hancock with a cat.

In the same comments section on Observer’s 2 August 2017 article, user Hugh Cullimore stated “on behalf of the arts collection, we’re looking to relocate the painting – there will be an opening for suggestions on a new location on ANU Schmidtposting in the next few days”. Cullimore did not post the poll. However, another comment by the same user was posted on the meme mentioned above, stating “we’ve put it [the portrait] into storage in the Drill Hall Gallery”.

These comments were made nearly 3 years ago, and the portrait hasn’t been seen since. So Observer took the matter directly to ANU to put an end to the mystery of Manning Clark’s hand.

So Where is the Portrait Now?

As identified in the 2 August Observer article, the then Deputy Vice-Chancellor, Professor Marnie Hughes-Warrington, indicated that the portrait was to be kept in storage awaiting installation in a future venue.

Nearly three years on and the situation seems to be the same, with a spokesperson for ANU stating that “the Manning Clark Portrait is safe and secure in storage”. They added that “the University will look to display the artwork at an appropriate venue at an appropriate time”.

As to when and where the portrait will return, it is not yet clear. Rest assured though that the portrait is safe and sound, and hopefully we will be able to see Clark’s hand once more sometime soon. 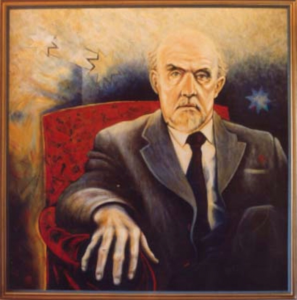