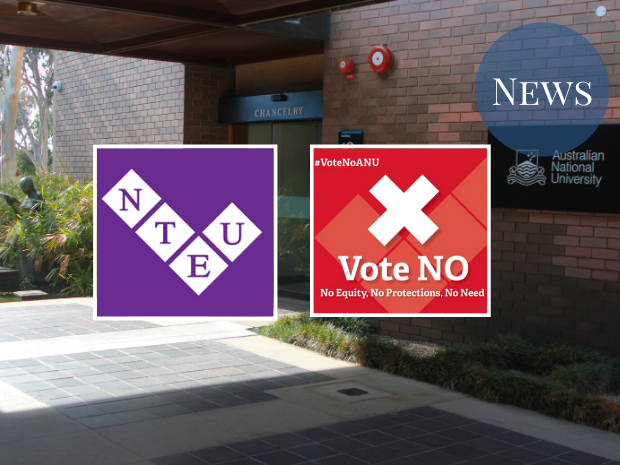 ANU academic staff have voted in favour of a one-year deferral on staff pay rises scheduled for July 2020 and 2021. The results of the vote on the variation to the Enterprise Agreement were released this morning via an email sent to ANU staff. The email indicated that 50.46% (2,128) of staff voted in favour, while 49.54% (2,089) voted against the variation.

The outcome of this ballot means that a majority of ANU staff who voted have “accepted” the proposed delay of salary increases under the Enterprise Agreement. ANU will now present the proposed variation to its Enterprise Agreement to the Fair Work Commission for approval. VC Brian Schmidt states that the outcome of the application will be communicated “as soon as [ANU] can”.

The ACT Division National Tertiary Education Union (NTEU) stated in a press release that it was “disappointed” in the vote’s outcome, which represented a  “very narrow” majority voting in favour of the deferral. In a blog post last Tuesday, the Division had encouraged all staff to vote ‘No’ on the basis of a lack of transparency from ANU about how the pay freeze could meaningfully preserve jobs and affect the viability of the university.

Staff were first notified of the vote on 9 June, with Vice-Chancellor Brian Schmidt advising that a 12-month deferment of the two-percent pay rise scheduled for July 2020 and 2021 would save the University $13.5 million over that period.

These proposed cost-cutting measures came in light of the significant “unforeseen costs”, which the university attributes to the COVID-19 pandemic and the extreme weather events on campus in January. The pay freeze is just one of many of the proposed measures by ANU to tackle its budget shortfall of $225 million for 2020 which includes “reducing” casual staff, and pursuing “voluntary separations”.

Vice-Chancellor Schmidt has described the vote as a “very close outcome” which reflects the “valid arguments on both sides”. Schmidt says he is committed to variation of the enterprise agreement, and if endorsed by the Fair Work Commission, the pay freeze will “directly translate” into ANU being able to “keep more jobs”. However, Schmidt has also conceded that the variation will not “resolve all the issues” the university faces, asserting that ANU’s costs will need to be reduced even further in the future.

The ACT Division of the NTEU has noted that “many staff” will be disappointed by the outcome; however, the Division welcomes Schmidt’s commitment to utilising the savings from the pay freeze to ‘save’ jobs at ANU. The Division has attributed the “vigorous campaign” of its members to increased transparency and negotiation from ANU since the proposed pay freeze was first announced, with a number of information sessions and a forum held to discuss the University’s financial situation and the variation of the Enterprise Agreement.

The ACT Casuals Network of the NTEU was more critical of ANU for the manner in which the vote was conducted. In a press release responding to the vote, the Network asserted that “the lack of transparency, consultation, and guarantees around this inequitable pay cut has led many staff to vote against it”. In particular, the network noted that “the [NTEU-ACT] union and its Vote ‘No’ allies had no access to staff contact lists”, and were consequently limited in its ability to reach out to staff, “unlike the machinery of ANU Management, which was at pains to have staff vote ‘Yes’”. The vote was not mandatory.

The Network called on Schmidt and ANU Management to be more transparent about job losses and to offer an indication of what the University’s rhetoric on ‘keeping jobs’ “actually means on the ground”.

The Network also emphasised that ANU was one of only two universities in Australia which have not released any “comprehensive financial data”, and noted that the University has not yet released its 2019 Annual Report.

ANU is not the only university which has faced significant financial issues in light of COVID-19. Universities Australia estimates a “conservative” revenue decline of $3 to $4.6 billion for Australia’s public universities due to the effects of the pandemic. On 3 April the NTEU commenced negotiations with the Australian Higher Education Industrial Association (AHEIA) to exchange temporary wage cuts for university rules aiding tertiary job security. This stirred significant controversy among tertiary staff and union members and has since been largely abandoned by the NTEU.

Further staff forums on ANU’s financial situation will be held on 3 and 10 July. For those who are experiencing significant financial hardship, ANU staff are informed that the Staff Urgent Relief Fund may be able to offer assistance.