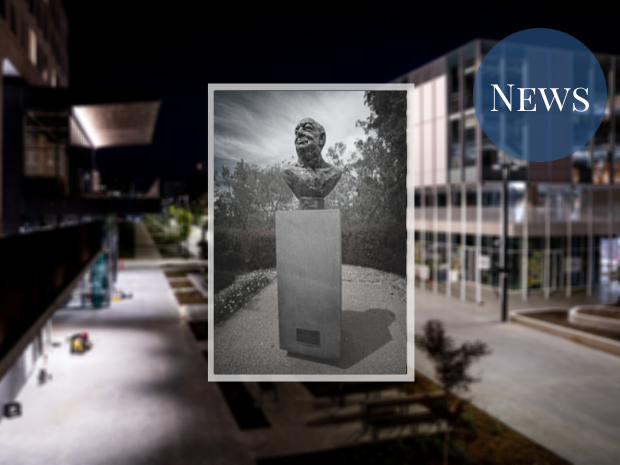 On 12 June, the ANU Ethnocultural Department launched a petition calling on the University to remove the statue and bust of Winston Churchill currently displayed on campus, referring to Churchill as an “icon of white supremacy”. At the time of publication, the petition has garnered 203 signatures, exceeding its initial goal of 200 this weekend.

The statue and bust are owned by the Winston Churchill Memorial Trust, whose national office is located on the ANU campus. Winston Churchill served as the British Prime Minister during the Second World War and again from 1951 to 1955.

The two figures are situated on the grounds of Churchill House on Balmain Crescent. According to the ACT Heritage Council, the statue was first moved onto the ANU campus “sometime in 1993”, and is a fibreglass replica of the bronze statue that can be found in Parliament Square, London.

The London statue was recently graffiti-ed with the words ‘was a racist’ during an anti-racism protest last month, and was subsequently boarded up for protection. The protest was part of a wider international resurgence of the ‘Black Lives Matter’ movement, which followed the death of George Floyd during his arrest by police in the US city of Minneapolis in May.

The bronze bust was commissioned by the Trust in 2001. The bust was sculpted by former ANU lecturer and Churchill fellowship recipient Ante Dabro. Although not owned by the University, the bust is included in the ‘ANU Sculpture Walk’ brochure.

An ANU spokesperson stated that the statue has been taken “off-campus for repairs to damage sustained during January’s hailstorm”. The University and Trust have reportedly confirmed that the statue will “return to campus in a few months”.

The Winston Churchill Memorial Trust was founded in 1965 through a public funding appeal that raised over $4,000,000 in donations, with bipartisan support from Commonwealth and State Governments. Around half of the donations were raised from individuals through a ‘door-knocking’ campaign.

The Trust has since been financed through profits from its investments. According to their website, the Trust’s main objective is to “provide an opportunity to Australians to travel overseas to conduct research in their chosen field” through the allocation of Churchill fellowships. Speaking to Observer, the Trust’s CEO, Adam Davey, further emphasised that the grant fellowships “require a benefit to, and a willingness to share with the Australian community”.

The student petition asserts that Winston Churchill “upheld principles of white supremacy”, and that “his ‘win’ for the British Empire does not make him deserving of our honour”. To this end, the petition cites several actions taken under Churchill’s leadership that led to the “entrenching and exacerbating” of the “ill treatment (and worse) of populations” across colonies of the former British Empire.

The petition states that Churchill’s actions exacerbated the severity of the Bengal famine of 1943. In an article published in March 2019, The Guardian cites studies suggesting that “Churchill-era British policies” were a contributing factor to the 1943 Bengal famine “which killed up to 3 million people”. The petition highlights a commonly quoted statement made by Churchill, which placed the blame for the famine on Indians “for breeding like rabbits”. He has also been quoted as denying that any wrong had been done to the “black people of Australia”, claiming that a “higher-grade race, a more worldly wise race, has come in and taken their place”.

In a statement to Observer, Davey claimed that “Australians know that Churchill was a product of his time” but admitted that “public knowledge of who Winston Churchill was varies greatly across the community”. In reference to his wartime premiership, Davey also suggested that Churchill represented the enduring “value of standing up for what you believe in and providing strong leadership”.

According to its website, The Winston Churchill Memorial Trust is committed to responding to “changing public [perceptions]” of Churchill. In a recent note sent to Churchill Fellows, Davey expressed his “strong support for all who are standing up against racism” and reiterated that “the Trust rejects racism in all of its forms”. He also claimed that although “there is no question” that aspects of Churchill’s “life and views on race…are widely seen as unacceptable today”, there is widespread “gratitude” not only for his “wartime leadership”, but also his “shaping of the free world”. The note went on to assure Fellows that diversity and inclusion remain a “firm priority” for the Trust.

When approached for comment on the petition, a University spokesperson merely stated that “ANU is a community that celebrates and encourages diverse perspectives and ideas”. The spokesperson said that the University would “continue to listen” to all of the ANU community and the “various viewpoints on discussions like this, as well as others”.

The Ethnocultural Department expressed its hope that the University would “begin to take small steps to show solidarity with Bla(c)k, Indigenous, and other People of Colour in Australia” (BIPOC). In a comment to Observer, Ethnocultural Officer Zenia Vasaiwalla said that she hopes to “start a deeper conversation about the institutionalised racism that still prevails on campuses across Australia” by removing symbols that celebrate “our historical trauma”. Vasaiwalla also said that the Department aims to  “encourage institutions” to “start taking steps to show their support and allyship” for the BIPOC community.

The petition explicitly calls for the removal of “non-critical representations of racist figures”, and highlights the Churchill statue and bust as examples of such representations. The Ethnocultural Department’s Publicity Officer, Lulu Alvarez-Mon, clarified that ‘non-critical’ representations are those that do not “encourage discussion and analysis of the history it represents”. She suggested that “critical representations” may include monuments that are “graffiti-ed”, or are accompanied by “plaques that extensively detail negative actions attributed to the figure” as well as explaining “why it deserves a privileged representation”.

Vasaiwalla further suggested that “if the statue cannot be removed”, the Ethnocultural Department would encourage the University to place an accompanying “plaque that explains Churchill’s history critically”. She emphasised the need to acknowledge that “Churchill represents a painful history” to an “important portion of our community”.

There has been substantial debate amongst students on social media regarding the removal of statues, on pages such as ANU Schmidtposting and the Ethnocultural Department’s Facebook page. In support of the removal, one student questioned “why we have statues to faulty people” as opposed to the “concepts they’re supposed to be lionised for”. However, others remained unconvinced, with one student suggesting that “removing the statue removes the chance to explain all of the bad, and all of the good”.

Many memes have also circulated suggesting that the statue should be thrown into a nearby body of water. This was likely inspired by Black Lives Matter protesters from Bristol in England, who on 7 June toppled and pushed a statue of 17th century slave-trader Edward Colston into the harbour.

A similar campaign at the University of Sydney to remove a statue of colonialist William Wentworth, and to rename a building bearing his name, has been ongoing since 2017. The changes urged by campaigners have yet to be implemented.