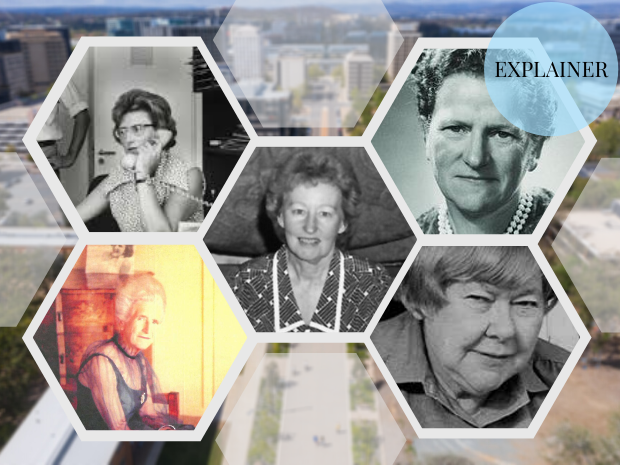 In 2017, the then-Deputy Vice-Chancellor Marnie Hughes-Warrington commented to Observer that the majority of the names of streets and buildings on campus were “very white and male”. There are currently 5 non-residential buildings on campus, of 48 total, named in honour of women who have made exceptional contributions to the ANU. Observer has gone through the records to present a profile of what made these women so great, and to examine the legacies that they have left. 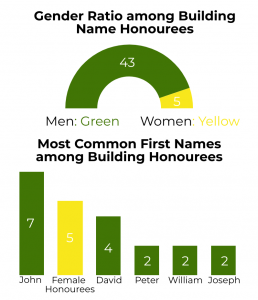 Graphic By Brandon How 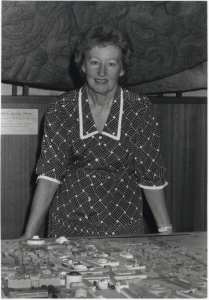 A photo of Beryl Rawson

The Beryl Rawson Building can be found at 13 Ellery Crescent, just off University Avenue. It houses the CASS student lounge, and offices for the College.

Professor Emerita Beryl Rawson spent 34 years at ANU. During this time she pioneered the study of the Roman family, which was a field that had previously been neglected by academics studying the ancient world. She first came to ANU as a Senior Lecturer in Classics in 1964, and was then promoted to a Reader in 1977. A Reader is an academic who has made significant research contributions. In 1981, Rawson was elected as the Dean of Arts and served two terms before becoming the Chair of the Department of Classics in 1989, a role she held until her compulsory retirement in 1998 at age 65. Her work made ANU a powerhouse in classical studies, and allowed her to host three international conferences.

Despite there being so few women in senior positions at the University, Rawson stated that she did not feel discriminated against as a female scholar. According to Rawson, the key difference between the ANU of old and the ANU of ‘now’ is the shift towards corporatisation. In an interview for the Emeritus Faculty’s Oral History Program, she deplored the impact this management style has had on interaction between members of the ANU community. She suggested that the loss of collegiality in the university community has meant that academics “don’t talk” because they have become “too busy” trying to navigate the bureaucracy.

According to her obituary, Rawson was a “hard-working and conscientious academic”. However, this meant she expected “others to conform to her own high standards” which at times led to her to come across as  unable “to conceal her displeasure at the failure of others to measure up” to her expectations. 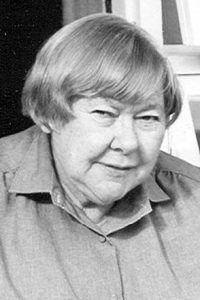 A photo of Marie Reay

The Marie Reay Teaching Centre is the primary teaching building in the Kambri precinct.

Spending 29 years at ANU, Dr Marie Reay was an ethnographer who achieved  particular renown for her work with the Kuma people in Papua New Guinea, but also broke new ground in anthropological studies of Indigenous Australians.

She first joined the ANU’s department of Anthropology and Sociology in 1953 after winning a research scholarship. That same year, she was amongst a pioneering group of academics who were sent to the Wahgi Valley located in the relatively unexplored Highlands of Papua New Guinea. Furthermore, she was the first ethnographer to undertake a detailed investigation into the position of women in a Highlands society.

Despite having a male dominated society, the Kuma treated Reay as an ‘honorary male’, and even made her privy to boys initiation rites. This was in stark contrast to the treatment she received from her peers in Australia. In an introduction to one of Reay’s post-mortem publications, Francaesca Merlan states that Reay felt “persecuted” under particular Department Chairs, some of whom denied her the right to supervise postgraduate students. Melran suggests that the misogynistic treatment she received at ANU largely contributed to her “periods of mental instability and recurrent depression in later years”.

Reay’s obituary describes her as “intimidating and abrasive, though she tempered her sharpness with sly, dry humour”. Although Reay distanced herself from the politics of the Department, she still “took delight in privately puncturing [the] pretensions” of the slew of male Department Chairs she worked with.

After Reay’s PhD thesis was published in 1959, she was awarded a research fellowship at the Department of Anthropology. She continued to visit the Kuma even after her retirement in 1988, even owning a house in Minj, Papua New Guinea. She was also a prolific writer, penning many poems and short stories in addition to her countless essays on anthropology. 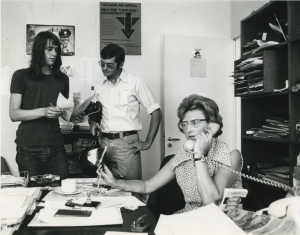 A photo of Di Riddell

The Di Riddell Student Centre is located in the Kambri precinct, and houses Griffin Hall, the BKSS, ANUSA and PARSA, along with a number of other student services.

In 1964, Diana (Di) Riddell was asked to work in the ANUSA office for a few weeks due to an absence of a member of staff. However, she ended up working at the ANU for over 30 years. Riddell served as the Administrative Secretary of ANUSA from 1965-1990, and manager of the ANU Arts Centre from 1990 before her compulsory retirement in 1995. She later helped found the ANU Emeritus Faculty in 1999 and served as membership secretary. The ANU Emeritus Faculty is a community for retired ANU academics and administrative officers who wish to continue to contribute to the University community.

Riddell and ANUSA put their weight behind numerous activist campaigns. The University has described her as “a central figure in the ANU community and the lives of thousands of students”. Their efforts were largely centred around organising activism efforts for the promotion of women’s and Indigenous rights, even playing a role in the establishment of the Aboriginal Tent Embassy in 1972.

The causes that Riddell supported range from improving student housing, improving student financial services, the installation of condom vending machines on campus, and support for students or staff afflicted by drug abuse. Riddell also played a crucial role in ensuring that the ANU Council had student representation.

In the 1960s and 70s, when students regularly demonstrated against the Vietnam War, Riddell would personally negotiate with the ACT police, courts, and judges regarding the release of mass-arrested students. She told the Canberra Times in 1995, “I was always bailing kids out”, on occasion bringing as much as $30,000 in cash with her to the “cop shop”.

In 1990, Riddell left ANUSA and took up the full-time position of managing the ANU Art Centre. She lamented that ANUSA had become “a bit tame”. Despite working for 25 years at ANUSA, the contract she was on did not entitle her to any superannuation. 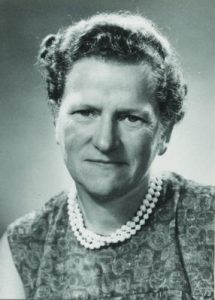 A photo of Hanna Neumann

The Hanna Neumann Building can be found on Science Road.

Born in Berlin in 1914, Neumann studied at the University of Berlin where she met her eventual partner, the mathematician Bernhard Neumann. Her first years at university coincided with the rise of the Nazi Party, and she is noted to have helped stop the harassment of Jewish lecturers by preventing  facist sympathisers from entering lecture halls. Ultimately, she had to abandon her plans to obtain a doctorate in 1937 as her opposition to Nazism made her position untenable.

After spending time across England lecturing, researching, and raising her five children, Neumann arrived at ANU with a professorial fellowship at the Institute of Advanced Studies in 1963. According to the University, she “was Professor and Head of the Department of Pure Mathematics from 1964 to 1971 and Dean of Students from 1968 to 1969”. Not only was she the “first woman to be appointed to a Chair at the Australian National University”, but she was also the first female professor of mathematics in Australia as a whole.

Neumann believed that mathematical education in Australia was “lagging behind the rest of the world to a frightening extent”. To address this perceived inadequacy, she delivered courses for secondary school teachers and engaged with the educators who designed new syllabuses for senior students. In recognition of her efforts, she was elected as the foundation Vice-President of the Australian Association of Mathematics Teachers in 1966, and received a fellowship at the Australian College of Education in 1970.

According to the Australian Dictionary of Biography, Hanna Neumann was a “humble woman, peace-loving, warm, enthusiastic, inspiring and energetic”. 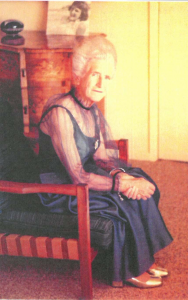 A photo of Molly Huxley

The Molly Huxley Building can be found at 1 Balmain Crescent. It is the gatehouse at the entrance of University House.

According to the ANU website, Ella Mary (Molly) Huxley studied history at Oxford University and later became the first lecturer in British History at the ANU. She was married to former Vice-Chancellor Leonard Huxley (1902-1988), and the couple had two children.

Molly Huxley played a crucial role in the development of social life at ANU. In 1960, ANU merged with the Melbourne University-affiliated Canberra University College and began to grow rapidly. This led to a large influx of new staff and visitors. In response to this growth, Huxley founded the ANU Club for Women (CFW) in 1961. The CFW provided support for new arrivals, whether they were female staff or female spouses. The CFW also hosted many social events and some recurring activities, ranging from bushwalking to book reading. The Club had its last meeting in December 2018 and has since been dissolved. The CFW made significant annual donations to student hardship funds, and when the club closed, all its remaining reserves were also donated to such funds.

In the ANU Reporter in 2015, alumni Howard Liu expressed his gratitude towards Huxley’s willingness to support new arrivals. He claimed that without her “behind-the-scenes lobbying, [he] would not have been able to have fast-tracked my immigration status from a stateless studentship to Australian citizenship in 1966”.