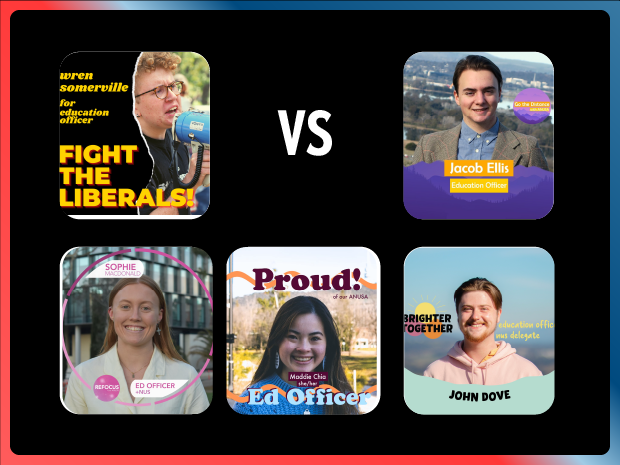 Five candidates are running for the position of Education Officer in a year where this ANUSA Executive has had to contend with the COVID-19 pandemic and proposed cuts by the government to tertiary education funding. All major tickets are fielding candidates for the role, with varying visions for where they will take it in 2021.

The Education Officer deals with all things higher education. Whether it be organising protests and campaigns, or lobbying the government on fee hikes, the Ed Officer aims to improve the overall student experience and fight the battles which are meaningful to them. The position itself is relatively undefined in terms of day-to-day duties. Even so, most prospective candidates agree on a long-term vision of increasing student engagement and activism on issues that impact the wider student body.

The Education Committee (Ed Com), which is run by the Officer, is essential to ANUSA’s advocacy responsibilities. All undergrad students are automatically members of the Committee, with the Officer running education seminars and fielding campaign ideas. The Officer also collaborates with other student advocacy bodies, like the National Union of Students (NUS) to run events, protests, and demonstrations. One example of this is the current ‘Kill the Bill’ campaign against the Federal Government’s cuts to higher education.

Running with 2020 Education Officer Skanda Panditharatne on the Go The Distance Ticket is Jacob Ellis. Ellis views educational activism as both a “responsibility” and a “privilege”, and is running on a policy platform which aims to “ensure that the quality of our education is secure”. He also plans to “rebuild” the Education Committee to attempt to solve the problem of “widespread apathy and disengagement among the student body”.

On the Brighter Together ticket is activist and campaigner, John Dove. He would bring over four years of campaigning experience to the role, having worked with organisations like the Refugee Action Campaign (RAC). Dove’s long term vision for the Ed Officer role is to “revitalise campus based activism” by engaging with those who are not typically aware of the roles and responsibilities of Ed Com.

Running with Proud! Of Your ANUSA is current Deputy Chair of the ANUSA Mental Health Committee, and Respectful Relationships Ambassador, Maddie Chia. Largely running on a platform focused on “intersectionality” between different groups of the student body, Chia wishes to transform Ed Com into something which is “funky, fun and fresh”.

The Refocus Your ANUSA! Candidate for Ed Officer is current NUS Executive member Sophie Macdonald. Presenting a platform founded on campaigning experience, Macdonald wishes to fight for issues which impact students both on campus and nationally. She believes that “there has never been a more critical time for a connected, informed and active Education Officer” as now.

Wren Somerville, who is running on the “activist”, SAlt-affiliated Fight the Liberals ticket, is the convenor of the ANU Education Activism Network. He has been involved in various social justice campaigns this year including “initiating” the ANU campaign against fee hikes, and was also involved in the No To Proctorio campaign.

The legitimacy of lobbying as a method of activism has proved a contentious topic of debate this election season. Lobbying involves discussing with legislators to explain and rationalise one’s views and seek to shape their opinion. This may involve contacting crossbench MP’s who hold critical voting power in Parliament to convince them to support or block a proposed bill. Part of the Ed Officer’s constitutional role is preparing submissions for the Government on higher education matters.

Somerville said that, if elected, he would fulfill his constitutional duties. Even so, he vehemently opposed the approach of working with crossbench MP’s like “Pauline Hanson and Rex Patrick” to raise student issues.

Dove generally agreed with Somerville on this issue. He notes that he doesn’t want to conform with the “bureaucratic idiosyncrasies [of ANUSA]” and aims to establish new “structures” which “uphold student’s interests”. However, he also flags that an “overreliance of protest” can lead to “dwindling attendance and a sense of stagnation.”

Ellis took a more affirmative stance, stating that he will “engage wholeheartedly with this part of the role”. He explained that while there is “lots of merit to protests”, they alone would “not …change Hanson’s mind”. He stated that this is a matter of “gritt[ing] our teeth” because “the bill cannot be killed without their help”.

Chia has argued that activism “comes in all shapes and sizes” and that ANUSA should not be taking a “one size fits all approach”. She expressed that activism looks different to everyone and that “all voices” should be heard, referencing consulting with autonomous departments. Throughout the debate she stressed that ANUSA’s approach should allow people to “choose the level of involvement they want” with student activism.

Citing her work on the NUS executive, Macdonald described the success the NUS has had using lobbying as a tactic to create change. She thought it was “ignorant” of the Fight the Libs ticket to rule out lobbying entirely, and argued that lobbying involves “explaining [one’s] views in a rational, formal, setting”. In the Refocus Policy Document, Macdonald’s strategies to fight against the cuts to higher education would include “information campaigns, petitions [and] protests”.

Ed Com, ANUSA’s central body for organising activist campaigns, has faced some serious criticism from many of this year’s candidates. Macdonald asserted during the debate that “in its current state, Ed Com is not accessible” as it is “dominated by fringe voices that tend to silence others”.

Ellis, who is currently Deputy Education Officer , wishes to “rebuild” Ed Com, not merely “improve the current structure”. Justifying this, Ellis claims that “radical groups [have] gain[ed] power in student unions by filling in the vacuums left by the absence of ordinary students”.

Chia, citing personal experiences of feeling excluded and out of place in Ed Com meetings, plans to take an “intersectional” approach to meetings to encourage students from different backgrounds to engage with ANUSA activism.

Dove shared similar sentiments to Chia, expressing that successful campaigns “have to be both open and attractive to students outside of the factions which currently dominate campus-based activism.”

Somerville added that many students “don’t know what ANUSA or the Education Committee is”, and that his focus would be on engaging students in various social justice campaigns.

At the debate, the candidates also described the campaigns they plan to launch if elected. Ellis stated that he would immediately start a campaign to “end wage theft on campus”. He then aims to build a working relationship with the NTEU to fight against cuts to education funding. Lastly, he plans to restore ANU’s SSAF by making “very aggressive, [and] very ambitious SSAF bids”.

Macdonald intends to engage with the current national campaigns run by the NUS. This would include increasing awareness and consideration of the challenges faced by remote students and carers, and creating a dedicated “Unions Week”.

Somerville echoed Dove’s plans, describing larger scale advocacy campaigns. In particular, he expressed his commitment to “mobilising students against the Liberal’s attacks and to fight for free education.”

Macdonald, in response, said that “in the current climate” these more ambitious campaigns “should not be a priority for Education Officer’s”.