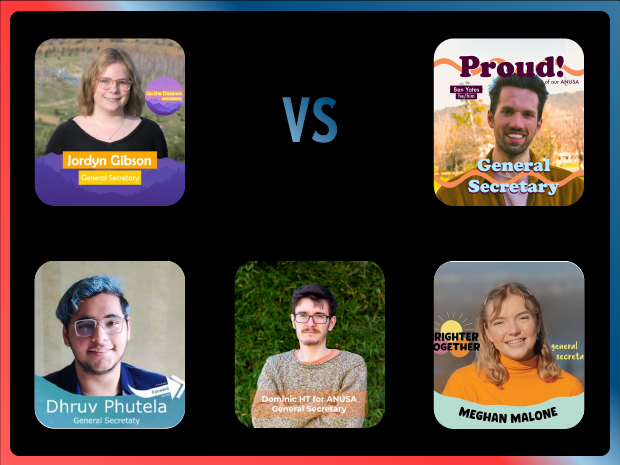 The General Secretary’s job is essentially to keep ANUSA running smoothly – they organise and run internal meetings like the SRC and other meetings like OGMs. The Gen Sec also interprets the ANUSA Constitution and other documents as needed.

A number of key issues that are the focus of candidate platforms this year include the implementation of the ANUSA Governance Review, support for General Representatives and Department Officers, and improving transparency and access to ANUSA for students

Brighter Together’s candidate is Meghan Malone. Malone is the current President of B&G, and was previously the Secretary of B&G ResCom in 2019. She is a third year Law/PPE student.

Dominic Harvey-Taylor (HT) is running on an independent ticket and describes himself as having ‘a lot of experience’ with ANUSA. HT is a 4th year Asian Studies/Law student. He worked as an ANUSA CAP Representative in 2019, and has been involved with “improving ANUSA’s governance through policy reform and working groups”, along with acting as a member of the ANUSA Disputes Committee.

Proud!’s candidate is Ben Yates. Yates currently acts as an ANUSA General Representative, the Vice-President (Education) of the Law Students’ Society, and a member of the 2020 Governance Review Working Group.

A New Way Forward’s candidate is Dhruv Phutela. Phutela states that, although he has not been a “part of the ANUSA team before”, he has always “done the maximum that an undergrad student can do” to engage with meetings and express his opinion on policies.

Go The Distance’s candidate is Jordyn Gibson, who is also running as an NUS Delegate. Gibson is a 4th year International Relations/Law student, and held the position of Clubs Council Secretary this year. She was President of the ANU Debating Society in 2019 and a member of the ANUSA Electoral Reform Working Group in 2020.

Chloe Tuazon is running as an independent candidate.

Increasing the transparency and accountability of ANUSA governance and policies, and making the Association more accessible, is a common theme across the Gen Sec candidates this year.

Malone from Brighter Together is concerned with “reducing the insularity of ANUSA’s governance” by providing paths for ANUSA to connect with the student body. She will furthermore ensure that changes to regulation, policies or procedures are communicated “openly and clearly”. She hopes to do this by making SRCs more accessible through practical, standardised measures. She also plans to establish a Governance Committee for “ongoing, long term review of ANUSA’s governance”, and to consider the recommendations made by the Governance Review.

Harvey-Taylor notes that ANUSA “sometimes fails to communicate effectively with the student community”. He plans to remedy this by sharing more updates about ANUSA and its representatives with students, accompanied by “easy to read infographics” and an improved website. HT is also concerned with the removal of barriers which “discourage student participation” in ANUSA. HT says that this will take the form of improving how and when meetings are held, and amending regulations which may create accessibility issues. He also intends to provide additional support to the Disputes and Financial Review Committees to increase accountability. HT also claims that, as an independent General Secretary, he is more likely to extend this accountability to members of the ANUSA executive. Additionally, HT seeks to reform the Disputes Committee to simplify the casual vacancy process, clarify ANUSA electoral regulations and to facilitate referrals of breaches of the regulations to the Disputes Committee. He also intends to remove the power of the Returning Officer to strip students of their ANUSA membership for electoral regulation breaches.

Yates from Proud! is working to create a framework to make the “significant powers” of the Gen Sec more “transparent and accountable”. He also wants to create forums which allow ANUSA’s governance to be reformed “in public rather than behind closed doors”. Yates hopes to create a Governance Committee, open to all ANUSA members. This committee is intended to increase transparency of the “discretionary decisions” of the General Secretary, bolster student confidence in the organisation, hold the Secretary to account and “upskill students in governance”.

The Forward ticket collectively proposes ‘MyANUSA’ as an online, accessible student services portal for students to access ANUSA’s services. They also plan to host monthly “town hall” meetings where students can directly address ANUSA representatives and executive members. These meetings are intended to “speed up” student consultation and increase student/representative interactions. Phutela also states that he will endeavor to publish a “minimum” of a brief summary of the conclusions reached at ANUSA meetings, for students to remain updated. He asserts that these summaries will allow the Gen Sec to maintain transparency.

Gibson from Go the Distance wants to ensure students do not feel “uncomfortable or intimidated” with engaging with ANUSA. She hopes to increase transparency around the acts of working groups and the executive, stating that she understands “how frustrating it is to see SSAF money go to an organisation that can be hard to understand and difficult to hold accountable”. She plans to do this through introduction of regular drop-in sessions for students and representatives to discuss the Gen Sec’s decisions. Gibson also plans to update the ANUSA website to centralise existing training resources and the ANUSA events calendar. She will also reform ANUSA’s standing orders, which provide the procedure for how meetings are run, in order to make SRCs “less combative and easier to engage with”.

Malone, with Brighter Together, hopes to make department training and support a priority to ensure “department officers don’t fall through the cracks”. She also highlights a lack of engagement of gen reps with ANUSA and with their individual ‘passion projects’ as concerning. To this end, Malone proposes a Gen Rep Project Register, which will provide a record of Gen Reps, their projects, and the status of those projects. Malone further proposes formalisation of governance training given to Department Officers to assist with Department engagement with ANUSA meetings and workings. Sessions will be run by the General Secretary once a semester or at the request of a Department.

Harvey-Taylor states that as a former representative himself, he intends to provide more support and training for Department Officers and other representatives, who may “often feel unsupported by members of the ANUSA executive”. He notes the importance of inductions and handovers in this process. He states that, as Gen Sec, he will provide incoming representatives with initial and ongoing training, with a focus on governance and demographic knowledge.

Gibson, with Go The Distance, intends to consult with Department Officers to reform governance training, and to clearly communicate that, as General Secretary, she is available for governance training at any time. She also hopes to work with Departments to create “a best-practice guide to consultation” to ensure minimum standards of consultation for motions that affect departments. Like Malone, she also plans to create a record of general representative projects and their progress. Finally, Gibson hopes to increase governance training and related resources for clubs and societies.

Phutela, with Forward, states that the voices of Department Officers will be a top priority in his role as General Secretary.

Malone, with Brighter Together, proposes an “ANUSA Sharepoint” for well-managed file storage to ensure greater institutional memory and efficiency. She also hopes to increase student engagement with ANUSA outside of meetings and for students who are unable to attend meetings, through the introduction of Absentee Questions. This would take the form of online submission, to be opened two weeks prior to ANUSA meetings, such as SRCs. She further aims to move to ‘multi-modal’ meetings to combine the benefits of meeting in-person with online accessibility. Malone also plans to release governance infographics explaining complex processes, such as the introduction of a motion, on the ANUSA website and social media.

Harvey-Taylor plans to reform ANUSA’s referendum regulations to ensure that every member can “exercise their right to vote” on affiliation or disaffiliation with any national organisations like the NUS. HT also intends to reform out-of-date procedures such as the need for polling to be conducted physically in “Union Court”. He also proposes the creation of a Working Group to review ANUSA’s standing orders in order to make meetings more functional. Some of his proposed changes include creation of a flagged item agenda system to ensure that “reports and other non-discussion items can be passed en masse”, introducing a “procedural question” provision, and review of the use of ‘standing orders’ in contexts outside of ANUSA, such as Clubs Council. HT suggests that OGMs and AGMs should be held online for accessibility purposes, and to help the meetings reach quorum.

Yates, with Proud!, suggests monthly Gen Rep ‘round tables’ to “encourage discussion and foster collaboration”. He also proposes re-introduction of the calling of General Meetings “in response to crises and unpredicted political matters”. Yates hopes for his proposed Governance Committee to take over the implementation of the findings of the Governance Review in a “holistic” manner.

Phutela and the Forward ticket plans to re-establish the off-campus collective “consistent with ANUSA’s power to establish committees”, and create a charter of student rights and responsibilities. They also plan to establish an ‘Academic Taskforce’ to assist with course accessibility, along with an “Independent Monitoring Committee” to support student rights. Phutela also states his aim of ensuring that a larger portion of student voices are heard and accounted for in ANUSA decision-making, particularly in relation to to the Governance Review.

Gibson has an extensive list of reforms and actions she intends to take if elected. This includes plans to reform ANUSA working groups through the creation of an ‘ANUSA Working Groups Policy’. Gibson envisages that this policy will increase transparency, and make these working groups more open to non-SRC members. Through this Policy, she also intends to  set a maximum time or meeting limit before the group must report to SRC on its progress.

In relation to existing working groups, Gibson plans to reform the annual Electoral Regulations Working Group on the footing of increasing transparency and functionality. She also intends to, among other things, establish a Standing Orders Reform Working Group, provide training on how to minute meetings with standardised minutes and agendas, and consult with incoming SRC members on the creation of an extendable time limit for SRCs.

In terms of the Gen Sec’s role of interpreting ANUSA documents, Gibson says that she will “[bring] high-impact areas of ambiguity” in the ANUSA Constitution to the SRC or the Disputes Committee, in order to secure long-term clarity and certainty for interpretations.