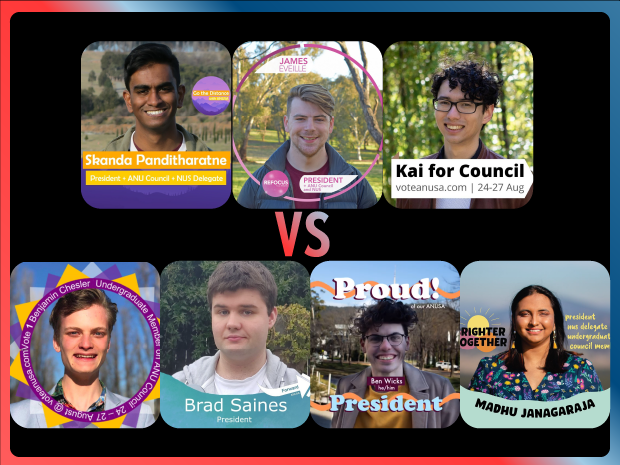 This year’s election for the Undergraduate Member on ANU Council (UMAC) is the most hotly contested since the role was separated from the ANUSA Presidency in 2017. There are seven candidates vying for the “most powerful student position on campus”, a 133% increase on last year’s competition.

The candidates have widely varying attitudes towards the role, but have generally withheld from committing to any specific policies. This is attributable to the fact that the UMAC role has historically been beset by confidentiality constraints.

The UMAC is 1 of the 15 members who sit on the ANU Council. The ANU Council is the University’s governing body, responsible for strategic planning, overall management, and the handling of finances. While on Council, the UMAC will have equal voting rights to all other members, in addition to the ability to sit on council committees. Committees are smaller bodies composed of a few Council members that help the Council “discharge of its responsibilities”, such as the Campus Planning Committee, the Audit & Risk Management Committee, and the COVID-19 Committee.

Until 2017, the sitting ANUSA President was also automatically made the UMAC. The roles have since been split and are voted on separately. Despite the separation, no candidates other than Presidents have been elected as UMAC so far.

Kai Clark is running as an independent candidate on the ticket ‘Kai for Council’. Clark was the ANUSA CAP Representative in 2019. While Clark is a member of the Australian Labor Party, he is not affiliated with any student faction. When he announced his ticket launch on Facebook, he stated that he will “fight for what’s right, regardless of personal cost”.

Benjamin Chesler is also running as an independent candidate on the ticket ‘Undergraduate Voice for ANU Council’. This is Chesler’s second attempt at being elected UMAC, after running on the same ticket last year. He is the current National University Theatre Society Treasurer. In his policy platform document Chesler promised he would do whatever he can “to support the growth of student voices in ANU governance”.

James Eveille is running on the Labor Right-aligned ‘Refocus Your ANUSA’ ticket, and will also contest the roles of ANUSA President and NUS Delegate. Eveille is the current CASS Representative. He previously ran unsuccessfully for NUS Delegate in 2019 on the Electrify ticket, and for General Representative on the 2018 Ignite ANUSA ticket. He was previously the President of the ANU Labor Students’ Club and says that he has been involved with the NUS ACT Branch.

Brad Saines is running on the politically-unaffiliated ticket ‘A New Way Forward ANUSA’, and is also running for ANUSA President. Saines is the current Careers Officer for the ANU International Relations Society. When asked by Observer about his motivation for running Saines said, “I want to give Undergraduate students a fair go”.

Ben Wicks is running on the politically-unaffiliated ticket ‘Proud! Of Our ANUSA’ and is also running for ANUSA President. Wicks is currently a Gen Rep, and ran on the ‘New Leaf’ ticket last year. In addition, he is also ANU Dining Society President and ANU Middle Eastern Cultural Society Treasurer. On the ‘Proud!’ website, Wicks stated his intention to “push for the council to adopt the values that students hold”.

Madhu Janagaraja is running on the politically-unaffiliated ticket ‘Brighter Together ANUSA’ and is also running for ANUSA President and NUS delegate. Having run as an independent last year, Janagaraja is currently ANUSA Vice President and was the Disabilities Officer in 2019.

Skanda Panditharatne is running on the politically unaffiliated ticket, ‘Go the Distance with ANUSA’, and is also running for ANUSA President and NUS delegate representative. Panditharatne is the current ANUSA Education Officer and ran on the ‘New Leaf’ ticket last year. He was also the Treasurer of ANU Greens Club in 2019.

How will the Candidates approach the role?

Clark stated in his policy platform that, due in part to the confidential nature of the UMAC position and that it has been “held hostage” by the ANUSA President, it was “almost impossible to have an election on policy”. That being said, Clark hopes to transform the role to increase its effectiveness in the long-term by creating an office, an advisory board, and a working group to clarify the legal responsibilities of the UMAC. He further stated that his term will be predominantly spent “consulting legal advice on fiduciary duties and negotiations with the University over publicising important details”.

In a comment to Observer, Chesler claimed it was “misguided at best and deceitful at worst to make political promises when you don’t even know what the next month holds, let alone next year”. As such, his campaign is centred on “rebuilding trust between students and the ANU”. If elected, Chesler will regularly present an ‘Undergraduate Member’s Report’ to ANU Council which will contain an “overview of the undergraduate student experience and student issues facing the community”. The report will be presented at SRC and ANUSA General Meetings and voted on by students before being brought before the ANU Council. In this way, Chesler suggests that he will be able to “[elude] problems of confidentiality”. Chesler hopes that, if elected, his work will “establish a model for future UMACs”.

Both Chesler and Clark argue that an incumbent ANUSA president cannot serve as an effective UMAC. They state that the ANUSA President would not have the time to effectively serve both roles and that there exists an inherent conflict of interest between the two, as the University and ANUSA’s priorities do not always align.

Saines, similar to Chesler, emphasised his ticket’s intention to rebuild trust between the University and students through a “partnership based on mutual respect and consultation”. Saines acknowledged that there exists a “noticeable hostility towards the ANU Council” by some members of the student body, but argues that such an approach is “not wise”. He hopes to “utilise a diplomatic approach” to find common ground between his ticket’s objectives and “pledges made by the ANU Council”. “I am more focused upon the conventional approach of utilizing ad-hoc town hall meetings to discuss directly about the ANU Council’s relationship with the student body”, he stated.

In contrast, Eveille, argues that the role of UMAC “isn’t to build trust between the administration and the student body” but rather to “tell the administration where they are going against student interests”. Although Eveille believes the ANUSA President is “best prepared to advocate for and argue for student interests” at the ANU Council, he understands the concern raised against previous ANUSA presidents. He notes that former Presidents “haven’t done good enough reporting” about their activities as UMAC. Eveille will, therefore, commit himself “to having a bare minimum standard for reporting back to SRC and the student body” about non-confidential Council decisions.

Wicks told Observer that he would approach the role of UMAC as a “position to raise the banner of progressive student interests” against the conservative voices “undeniably” heard at the ANU Council. Furthermore, he acknowledged a need for “the line between president and UMAC…to be defined further” and that it would be the responsibility of whoever is elected to “engage students who empower [the UMAC]”.

If elected, Janagaraja will “endeavour to explore” avenues to increase transparency of the UMAC role. She notes, light-heartedly, that she already posts updates “on Schmidtposting often and noisily enough”. She further rejected the supposition made by the Independent candidates that the UMAC position has insufficient time and a problematic conflict of interest. Overall, Janagaraja told Observer that she prides herself “on being focused on outcomes”.

At the ANUSA election debate on Friday, Panditharatne admitted that he doesn’t know how he would do “this role differently”, given the lack of reporting from previous UMACs. However, he argued that the ANUSA President would still be “much more accountable to the student body” than an independent UMAC would be.

In addition to the extensive reforms Clark hopes to bring to the position of UMAC, he intends to establish a ‘SSAF Watchdog’ to “ensure transparency from University organisations that receive a significant portion of SSAF Funding with little student oversight”. He also suggested that the body should be used to investigate “other elements of the University budget, as well as cases of unprofessional behaviour from the University that have not or cannot be resolved by internal mechanisms”. At the ANUSA election debate on Friday, Clark also stated his intention to push for more frequent de-classification of Council decisions.

Chesler hopes to soften the impact of cuts to student services by suggesting alternative “pathways for savings”. He suggested that such a pathway may entail “not building some aspects of the campus master plan”. Chesler will also voice student concerns in areas he believes the University has been “dragging their feet”, highlighting SASH issues as one such area.

As an off-campus student himself, Eveille‘s election platform is broadly committed to “voicing concerns relating to transportation, parking and other accessibility issues faced by students who live across the ACT”. He is also adamant that the UMAC “be held simultaneously with the ANUSA Presidency” due to his belief that “ANUSA needs to be best prepared for the decisions made by ANU Council”.

Saines intends to pursue several policy proposals, should he be elected UMAC. One of his “signature” policies to be brought before the ANU Council is “an official ANU Charter of Student Rights and Responsibilities”. He particularly hopes to “set in stone” the right to “reside and study in an environment safe from sexual harassment and sexual assault”. His other main proposal is of “a financially viable plan” to lower the University’s carbon footprint. This plan includes reforms such as “switching to recycled paper” and using “synthetic printing cartridges” to reduce the University’s dependence on oil-based toner.

Wicks’ UMAC campaign is centred around a “policy of divesting ANU from fossil fuels” an objective he claims “is not distant or unachievable”. He states on the Proud! Website “that it is deeply unacceptable that ANU is still invested in fossil fuels”. Furthermore, he argues that it is “irresponsible” for the University to be invested “in a dying industry”.

Janagaraja’s “priorities and platforms” for the UMAC position would be “the same as they are for President”. These would broadly include “addressing institutional responses to sexual assault and sexual harassment, student services and pastoral care and academic equity and justice”.

Panditharatne claimed that, as UMAC, he would push for the declassification of more documents, stating his aim to “reveal stuff” relating to ANU Council. He further asserted that change could be brought about most effectively when “ANU is shamed in the media”.