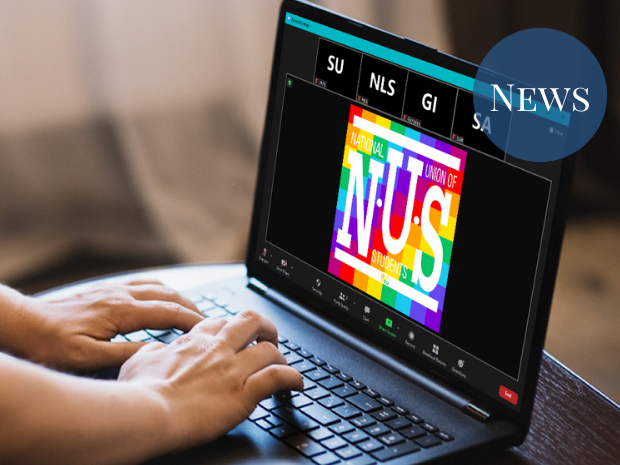 This year’s National Union of Students (NUS) National Conference (NatCon) took place from 9 – 10 December. As usual, amidst the policy debates, accusations flew around the conference floor; only this time the conference floor was a Zoom Meeting instead. On occasion, speakers who were cut-off by the mute button, took to the chat to heckle their opponents. In some instances the chat spam was enough to break up a speaker’s internet connection while they were addressing the conference.

After the conference the 2021 NUS Office Bearers were elected, however, these were all uncontested. Amongst those elected are two ANU students, President Zoe Ranganathan and Women’s Officer Georgette Mouawad. The Socialist Alternative faction was unable to gain a single position. 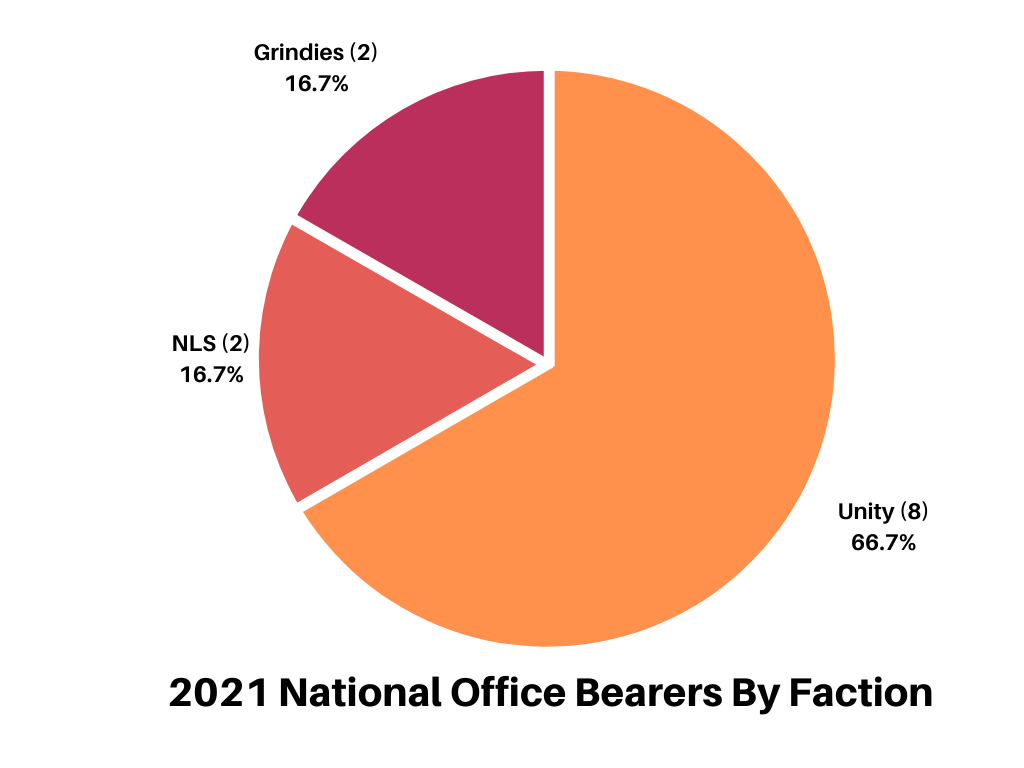 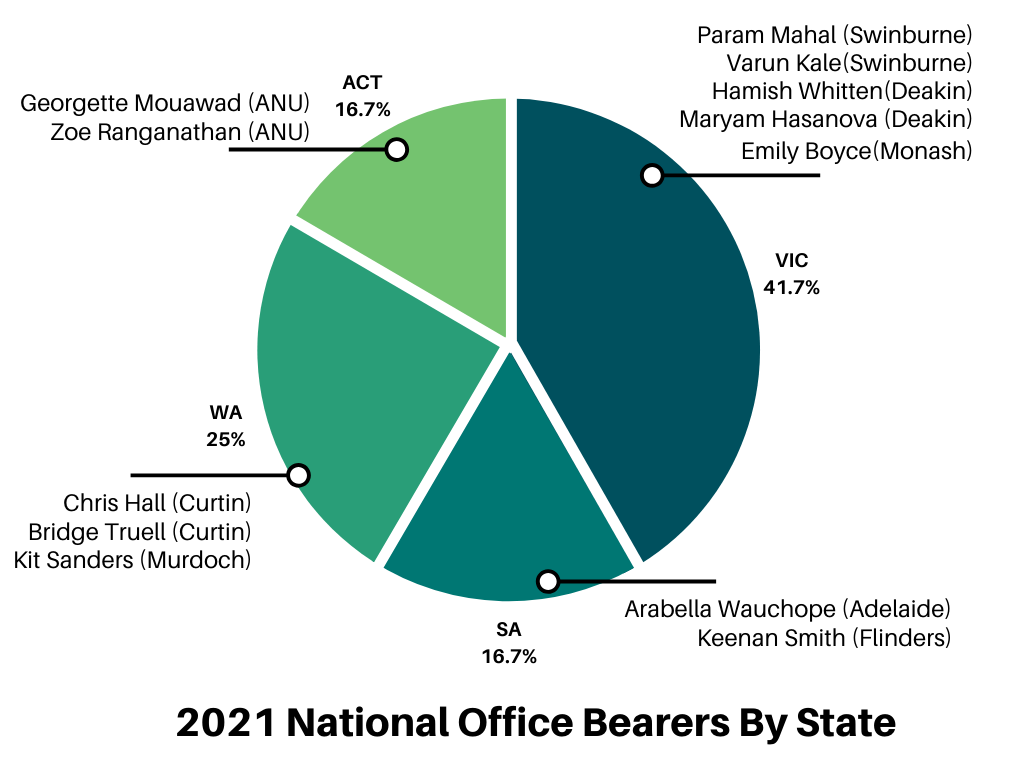 Nat Con presented two days of fine student politics. The aspiring political leaders were characteristically combative towards one another, often flooding their attacks with passion and swearing.

The conference started on 9 December with a bang, of sorts. After accidentally choosing the Zoom Webinar format, outgoing NUS President Molly Wilmott had to suspend the conference as delegates were unable to see each other. Socialist Alternative (SAlt) Delegate Anneke Demanuele used her early speaking time to criticise the format of the conference at one point stating “who the fuck am I speaking to”.

Not to fear though, within the hour all 150 attendees were back. Delegates debated by-laws and uncontroversial regulations. Once the admin was cleared, the spectacle of Nat Con could begin. Before regaling the tale of Nat Con, Observer has broken down the fundamentals of the conference.

The NUS is the peak representative body for all undergraduate students in the country. Each year, ANU and other affiliated and accredited universities elect delegates who attend the National Conference. ANUSA delegates are elected during the ANUSA elections. The Conference’s designated purpose is to debate and pass motions and policy which will guide the direction of the Union in 2021. The NUS is also able to coordinate activist campaigns and, among other things, lobby the government on issues that have a direct impact on students and the wider community

The motions to be discussed were split into several broad categories covering the various NUS Officer Bearer’s Portfolios. This ranges from Education to First Nations to Disabilities. With the intent of keeping the conference on schedule, the Chair would often limit debate to a speaker or two for and against the relevant motion. This led to considerable uproar from members on the floor, particularly when it came to discussions on the more controversial motions. Again, opposition to this procedure could only be taken up on the Zoom chat. This was often disregarded by the Chair, so the conference ran despite these concerns.

Delegates can either vote independently on motions, or vote with their aligned political faction. With the exception of a few motions – which mainly featured abstentions – most attendees vote in line with their faction’s position, with some factions binding the votes of its members.

So who are the factions which control the conference?:

For more information on the fundamentals of Nat Con see Observer’s previous explainer.

All but two of the motions in the Education Portfolio passed during the conference.  A number of motions were moved en bloc (discussed and voted on as a package not individually) leaving accusations from SAlt of NLS and Unity (the apparent movers of the procedural) working together to “clamp down” on debate.

A motion titled “Activism means being proactive”, moved by SAlt, failed, and was described by some as “cynical”. The motion called for the NUS to support campus-based activist campaigns “when needed”. Some critics suggested that this was a ploy from SAlt to commit the NUS to funding campaigns which it doesn’t necessarily support.

The conference passed motions committing the NUS to support the standardisation of assignment submissions, supporting “alternative” learning methods for students who are unable to make it on-campus, and standing in solidarity with all University staff impacted by cuts to the higher education sector.

There seemed to be a renewed focus on Vocational Education (VE) students this year, after concerns that TAFE and other VE students are left behind in NUS campaigning and lobbying. The NUS Vocational Ed policy platform passed at this year’s conference which advocates for reform to the TAFE system, “rejecting corporatisation”, and enhancing representation. Despite this, a motion moved by the widely criticised Ed Officer Lincoln Aspinall, which would amend the role of Ed Officer so that TAFE students were represented explicitly was rejected by the conference.

The closing motions on the welfare section provided some of the most contentious debates of the conference. Outgoing NUS Queer Officer, Natalie Acreman moved both motions, titled “Men are not oppressed for being men” and “it’s not about men”. Acreman was an ardent critic of the wording of the current NUS position in relation to access to domestic violence services. The position holds that the NUS should advocate for these services “especially for men” given that there is not a dedicated male domestic violence centre in the country. Acreman argued that the NUS shouldn’t legitimise the rhetoric “that men are oppressed on the basis of gender”. Critics of the motion said that, if passed, it may “invalidate” the experiences that men face. The motion ultimately failed.

On the following motion (“It’s not about men”), ANU Student Wren Somerville used his speaking time to state that “it is absolutely appalling that the Grindies voted down [the previous motion]”. This motion would remove a clause which discusses the phenomena of “fragile masculinity”. Acreman argued that the motion “constructs an idea that men are the real victims of gendered oppression”. Somerville concurred, arguing that it is “really misleading to have the phrase toxic masculinity” when “domestic violence and violence [in general] is about sexism and systemic oppression of women”. There was some confusion regarding the process of counting votes, as the Grindies abstained, Unity voted against, and Salt and NLS voted for. The motion again failed.

Also passed in the welfare portfolio were motions committing the NUS to support a stance on Healthcare for All, Equal Pay for Equal Work, and advising institutions to increase coverage of mental health first aid courses.

The Women’s portfolio began with discussion on a motion which would place survivors of sexual assault and harassment at the forefront of consultation “prior to the [Union’s] release of public prevention advertisements”. What seemed to be a wholly supported, bipartisan motion resulted in an abstention from SAlt. The following motion passed, with all in favour, advocating for access to free abortions.

Perhaps the most contentious motion of the conference was “Security on Campus” moved by SAlt delegates. The motion proposed that the NUS “not endorse the presence of security on campus”. Citing examples of security cracking down on protests at the University of Sydney earlier this year, the motion states that “campus security is used to police and repress organising and activism, and generally to control student life”. Similar sentiments were raised by another speaker representing SAlt, highlighting that security are “not the friends of student activists”. Speaking against, many people in the chat and conference itself raised their security concerns regarding 24 hours spaces, which feature on many campuses. Echoing this, the next speaker against the motion expressed confusion as to why this motion was placed in the women’s chapter when all speakers for the motion hadn’t discussed the effect of security on women. The speaker went as far as to say “I don’t know how much ket you have been snorting”. The motion ultimately failed.

In the Ethnocultural section a motion aiming to recognise the “defensive and humanitarian” nature of Australia’s war involvements in recent history was tabled by Unity. The motion would also add a point in the NUS’ policy book which would condemn the “military expansion and the construction of new military bases in the Asia-Pacific region”. Unity was accused by the rest of the conference floor of being sympathetic to the Australian military’s “disgusting history” in the Pacific region. A speaker against the motion (from NLS) called on Student Unity to “explain themselves” after they expressed their belief that the motion sounded as if it had been written by Liberals. The motion failed, with only Unity voting in its favour.

The International Student category had far more success in passing motions, with all those that were tabled being passed. There was particular focus on compelling the NUS to advocate for a “support system” in order to “break the stigma around mental health” in the international student community. Only Unity voted against a motion that added a clause to the International Chapter in the NUS policy book encouraging free education for both domestic and international students. However, the motion was still upheld.

What Were ANUs Delegates Up To?

Luca Corby and Sophie Macdonald were both absent on the first day of the conference. Corby told Observer that he was unable to attend “due to conflict with another commitment”. Corby was present for the second day of the conference. Corby expressed his disappointment with the Nat Con organisers after they released the agenda at 9:30 pm the night before the conference was due to start, and cited the “insufficient notice of deadlines”, where Corby was hoping to table a motion to the floor.

Observer cannot confirm Macdonald’s attendance on either of the two days of the conference, and she has not responded to a request for comment.