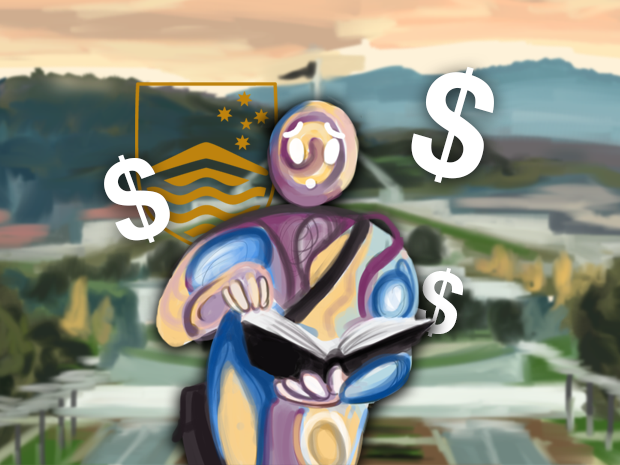 For the ANU students who have to support themselves financially, working and ‘getting by’ dominates all aspects of university life. In the absence of substantial financial assistance from parents or Centrelink, academic success becomes merely a minute feature within an immensely complicated university experience.

In interviews with Observer, these students share their stories.

Fitz is a second-year student living at the Canberra Student Housing Co-operative. The Co-operative is a student-run organisation providing affordable community-based housing. Fitz is from a single-parent family and has worked various jobs since they were 11. Fitz said “it was always the expectation that when you’re at uni, you support yourself”, and that they would have “felt like a burden” on their mother otherwise.

Fitz’s decision to leave their employment as a housekeeper last year left them feeling “despaired”. Although the “toxic work environment” compelled them to resign for their mental health, they felt as if they “had no other options” to support themself upon resigning. Fitz maintains that although they had always been “willing to make the sacrifices”, they sometimes wondered if their whole time in Canberra would be “going in between horrible jobs” and “having to sacrifice [their] dignity or mental health” to support themself.

A 2013 report by Universities Australia found two-thirds of full-time domestic undergraduates have incomes of less than $20,000 per year. The national poverty line is roughly $23,764 per year. One in four students who cited financial concerns also reported they regularly go without food or other necessities because they cannot afford them. In 2018, a study by the University of Melbourne found similar trends in international students at Australian universities.

Students who come from a family earning less than $55,626/year are eligible for the Youth Allowance Centrelink payment. For every dollar that a student’s parents earn over $55,626/year, their eligible payment is reduced by 20 cents.

In an interview with Observer, NUS President Zoe Ranganathan criticised the current Youth Allowance system. Ranganathan has heard “countless stories from students who say that they’re not able to get a letter from their parents stating that they’re financially independent”.

“[This] creates an institutional issue of keeping students who already have tricky home situations further into poverty”, she said. Fitz echoed Ranganathan’s concerns, stating that “basically if your parents are together, you can’t really qualify.”

Jack is a third-year student who previously lived at Fenner Hall. Jack recounts he was “probably one of the only financially independent people at college” in the time he was there. The need to work to support himself was an obstacle to participating in college activities, and Jack initially felt as if he “hadn’t been able to make any concrete friendships” because he “was too busy”.

Although he was first living in Canberra in an off-campus sharehouse, the living conditions led Jack to apply for Fenner Hall shortly after out of “desperation”. Fenner Hall was “about $140 more [expensive]” than his previous sharehouse.

A 2019 Anglicare report found that only 2 per cent of 69,000 surveyed Australian rental properties were affordable for those earning the minimum wage. Canberra remains the most expensive capital city in the country for renters.

Jack described living on-campus as an “easy way to meet people and make friends”, but recalls that it was equally easy for him to find the privilege of others “frustrating”. Although his family is ”very middle income”, he realised upon coming to Canberra that what he “had perceived as middle income is definitely different to what most people [here] perceive.” Jack recounts seeing firsthand “how easy [some students] have got it”, and felt they “take it for granted”.

Although he does not feel that there is a level of elitism among the students on-campus, Jack said the “underlying factor” of his financial independence was felt most strongly around the semester holidays. In his own words, it felt like “everyone would go home for the holidays…and not really have to think about the cost of it, while you have to stay behind and work.” Jack discusses going home for his mother’s birthday, and returning to Canberra having to “work 40-hour weeks” to “make back what [he] had lost”.

Jack said he has always had to work “25 to 30 hours” per week at his hospitality job during the semester. He would often work “45 hours [per week] for two weeks straight” during the breaks, before “going straight back into the same routine” at university.

A 2011 report by the Department of Education, Employment and Workplace Relations outlined that although past work experience has positive effects on job prospects after graduation, significant work hours undertaken by a student can be adverse to study completion. Working 16–24 hours per week reduces the completion rate by eight percentage points, while more than 24 hours reduces it by 14 percentage points.

Fitz said it has been a “big reality check” to search for affordable mental health services. The search to “find [a psychologist] who’s appropriate” has been “a challenge” financially. Fitz said the  Medicare rebate isn’t consistent across practices, and varies based on the psychologist. Despite the rebate, sessions still cost “at least $100” out of pocket.

When asked whether they considered the free ANU Counselling services, Fitz cited stories on the alleged long waitlists as the primary reason for seeking external mental health services. Data has shown the average student-to-counsellor ratio at Australian universities sits at about 4,340 students per counsellor.

Although university mental health services have experienced a demand increase, particularly from ‘high-risk groups’ such as low socioeconomic and international students, large universities have lacked the capacity to meet ratios recommended by the Australian and New Zealand Student Services Association.

When asked about his endurance despite his work and university schedule, Jack tells himself, “this is your position, [and] your choice. Live with it.” He doesn’t consider his exhaustion “overwhelming” but says that it is “always present”.

Despite the obstacles presented by their financial independence, neither Jack nor Fitz expressed regret about coming to Canberra. Jack reflects that witnessing the financial strain his family endured before his move to ANU compelled him to “prove to [him]self that he could do it [on his own]”.

Fitz “didn’t want to be excluded from Canberra just because [they] were low income” noting that foregoing the opportunity to attend ANU based on their financial status “would be far more frustrating than living and working here”.

The pressures of financial independence for university students do not take away from their pride or resilience. In their own words, Fitz concludes:

“I’ve had a lot of ups and downs trying to find the balance between uni, work, health and relationships – but I’m really happy with the life I’ve built and the place I’m in right now.”

Information about accommodation bursaries for undergraduate and postgraduate students at ANU can be found here.

Information about the ANUSA Emergency Grant for undergraduate students can be found here.

Information about the PARSA Emergency Grant for postgraduate students can be found here.