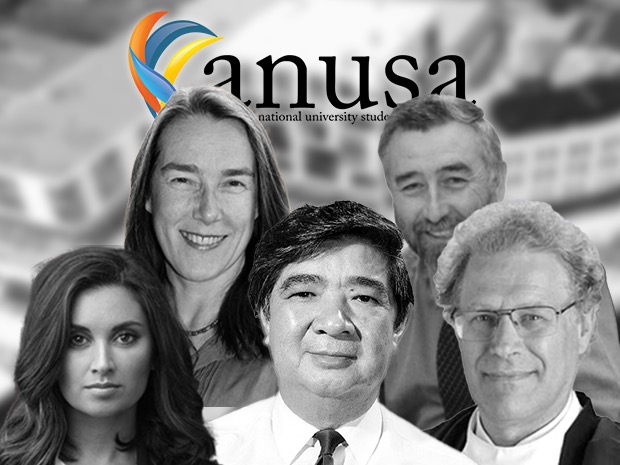 Since its establishment in 1962, ANUSA has seen many of its former presidents propelled into successful careers. There is often a perception among students that serving as ANUSA President is a segue into a political career, but how many have actually taken this route? Observer has compiled a list of some of the former ANUSA presidents who have gone on to enjoy esteemed careers after their time at ANU.

John Soong Chung Yocklunn was born to Chinese parents and emigrated to Australia as a child. He spent his schooling years in Perth, before making the move to ANU where he studied a Bachelor of Oriental Studies as a part-time student.

In a 1965 Woroni article, Yocklunn detailed that he had been a part of the SRC for three years, serving for one year as Vice-President of ANUSA prior to being elected for the top job as President in 1965. According to The Canberra Times, Yocklunn was “seldom seen on campus in anything but an impeccable suit”.

After graduation from ANU, Yocklunn began work at the Treasury in 1969 before undertaking work in the Australian Public Service at the National Library of Australia in 1974. He also achieved a Master of Arts (MA) from the University of Sheffield in 1974.

Yocklunn’s role at the National Library of Australia saw him move to Papua New Guinea – then under Australian administration – where he served as Chief Executive Officer to Papua New Guinea’s (PNG’s) first Chief Minister, Michael Somare, after PNG declared independence in 1975. The same year, Yocklunn was awarded a Knight Bachelor, an award acknowledging someone who has been knighted but not inducted into the official orders of chivalry, for the role he played in assisting PNG’s route to independence.

Yocklunn also served as National Librarian of the National Library of Papua New Guinea and in 1977 was the Director of the Royal Tour of Queen Elizabeth and Prince Phillip. His service saw him receive a Knight Commander of the Royal Victorian Order. After leaving PNG, he then became Deputy Chairman of the Chinese Australian Museum in Melbourne in 1983.

Sir John Soong Chung Yocklunn passed away in 2016. His obituary notes that he is “the only Chinese-Australian to receive a knighthood”.

As a former Judge on the ACT Supreme Court, Justice Richard Refshauge has enjoyed a long and decorated career as a prominent jurist.

Refshauge graduated from ANU with a Bachelor of Arts (Honours) in 1972 and a Bachelor of Laws in 1975. 1972 saw him appointed ANUSA President and selected to represent the Australian Union of Students (now the NUS) at a conference organised by the International Union of Students held in India. In a 1972 Woroni article, Refshauge sought the presidency to advocate for a “better education system” and to continue the “fight for a reasonable Government attitude to birth control”. Another Woroni article described Refshauge as “the best President for four years”.

After the completion of his studies at ANU, Refshauge commenced his legal career at the Canberra firm Macphillamy Cummins & Gibson, making partner in 1981 and senior partner in 1992. He was then appointed as the third ACT Director of Public Prosecutions in 1998, before becoming a Judge on the ACT Supreme Court in 2008.

Since 1986, Refshauge has delivered lectures on civil litigation at ANU, and in 2001 became an Adjunct Professor in the ANU College of Law. In his 2017 retirement speech, Refshauge described himself as feeling “chuffed” as he recounted a story of another judge telling Refshauge that “he had remembered and valued those lectures” on civil litigation.

Refshauge’s tenure on the Supreme Court drew to a close in 2017 after reaching the mandatory retirement age of 70. A 2017 ABC article said he was best known for his “compassion”, often allowing offenders to undergo rehabilitation prior to the final sentencing.

However, this was not to be the end of Refshauge’s career. In June 2020, he was appointed Acting Judge on the ACT’s Drug and Alcohol Court – a position he still retains.

Gary Humphries has spent the majority of his career in law and politics, rising to the top as the former Chief Minister of the ACT in 2000.

Humphries was heavily involved in student politics at university, serving as both President of the ANU Liberal Society and ANUSA in 1982. A Woroni article published in the same year described Humphries’ election as a “surprise”, stating that “the Left at ANU…suffered their worst setback in memory”. He graduated with a Bachelor of Laws and a Bachelor of Arts in 1982.

Following graduation, Humphries worked as a solicitor from 1983 to 1988, and in 1987 became the President of the ACT Liberal Party until 1989. He was then elected to the ACT Legislative Assembly, representing the Molonglo electorate. Between 1989 and 1999 he held various shadow ministerial positions, including ACT Attorney-General and Deputy Chief Minister, before being appointed Chief Minister in 2000.

After Liberal Party’s defeat in the 2001 ACT elections, Humphries turned his attention towards Federal politics. He was chosen to represent the ACT in the Senate – a position he held from 2003 until 2013.

In 2014, Humphries exited the Canberra Liberal Party after a spate of disagreements, labelling it as “undemocratic” and dominated by the “hard right”. After this, he became a regular contributor to The Canberra Times and RiotACT before being appointed Deputy President of the Administrative Appeals Tribunal in 2015.

Humphries held this position for five years until he stepped down in 2020 to focus on “other projects”, according to The Canberra Times. He is currently working on his doctoral thesis at ANU on the history of ACT Self-Government during 1988 to 2001.

Lesley Ward stands out from the stereotypical ANUSA President, having completed a Bachelor of Mathematics (Honours) at ANU and continued on to enjoy a successful career in academia as a mathematical researcher.

Ward was elected ANUSA President in 1985. Her presidency placed emphasis on issues concerning women in accommodation, their position as students, and the “need for women to organise autonomously and to have financial autonomy”. She was also involved in various initiatives that opposed the reintroduction of tuition fees for universities.

In 1986, Ward received the Hanna Neumann Prize for Mathematics IV (Honours) and the Tillyard Prize upon graduation from ANU. She then attended Yale University where she completed her Master’s and PhD in Mathematics, graduating in 1994. For the 1991-1992 period, Ward was awarded the Yale Prize Teaching Fellowship and then a Postdoctoral Fellowship at the Mathematical Sciences Research Institute (MSRI) in Berkeley, California.

Following this, she joined Harvey Mudd College, holding Assistant and Associate Professor positions, and remained there from 1997 to 2006. In 2006, she returned to Australia, settling into the University of South Australia as a Senior Lecturer and Professor of Mathematics. She remains there today.

In addition to her teaching accomplishments, Professor Ward has received various accolades for her extensive research on harmonic analysis, complex analysis, and industrial applications of mathematics. She has been a Kirk Distinguished Visiting Fellow at the Isaac Newton Institute at Cambridge University, a Fellow of the US Association for Women in Mathematics, and a Fellow of the Australian Mathematical Society.

In line with the values she upheld as ANUSA President, Lesley Ward has continued to work on gender equity issues in the mathematical field. In the 2015 to 2016 period, she Chaired the Women in Mathematics Group (WIMSIG) and in 2017, directed a WIMSIG conference on the ‘Celebration of Women in Australian Mathematical Sciences’.

A prominent author, columnist, and political commentator, Jamila Rizvi has enjoyed remarkable success since graduating from ANU with a Bachelor of Laws and a Bachelor of Commerce in 2010.

Rizvi was elected as ANUSA President in 2008 after receiving financial backing from the Labor Party, as reported in a 2008 Woroni article. Prior to her election, she was a staffer in former Prime Minister Kevin Rudd’s media unit, convenor of the Labor Right at ANU, and former President of the ACT Branch of the National Union of Students (NUS).

Rizvi dove straight into the world of politics after graduation, taking up positions with Federal Labor politician Kate Ellis as youth policy advisor, press secretary and Deputy Chief of Staff from 2009 until 2012.

In 2013, she left federal politics to become an editor at the successful women’s magazine Mamamia, where she was eventually promoted to Editor-in-Chief. Her move to leading the magazine saw its readership grow by almost 2000% across the following three year period.

2014 saw her receive various awards – including being named one of Cosmopolitan’s 30 Most Successful Women Under 30, 2014 ANU Young Alumnus of the Year, and a finalist for Best Newcomer in the 2014 Women In Media Awards. In 2015, she was recognised by the Australian Financial Review as one of Australia’s 100 Women of Influence.

Rizvi has since published two best-selling books – one in 2017, titled Not Just Lucky, and the other in 2018, titled The Motherhood. She is also the co-founder of the talk show series Tea with Jam and Clare, the Chief Creative Officer of Nine Network’s Future Women, co-host of The Briefing podcast, columnist at the Sydney Morning Herald and The Age, and a contributor to The Project, Today, The Drum and Q and A.

Her interviewing style and prowess has garnered thousands of listeners and readers, having the opportunity to interview highly influential subjects such as Manal Al-Sharif, Bill Gates, Kim Kardashian, and Julia Gillard.

On top of her media work, Rizvi is an Ambassador to the humanitarian aid agency CARE Australia and the refugee advocacy group Welcome to Australia. In 2020, she received the Victoria Award for Excellence in Women’s Leadership.