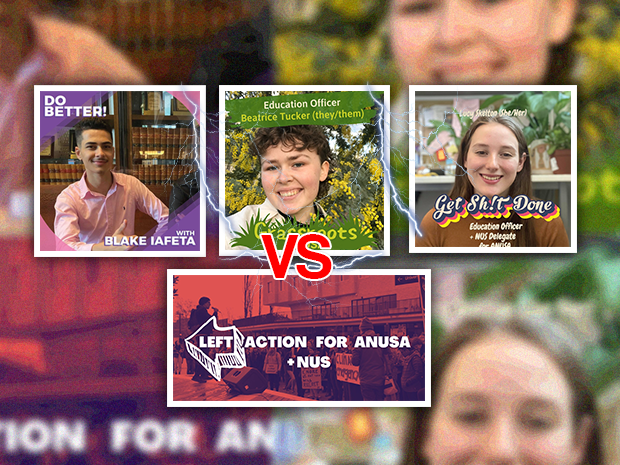 Four candidates will be competing for the position of Education Officer in this year’s ANUSA elections: Blake Iafeta, Beatrice Tucker, Grace Carter, and Lucy Skelton.

Independent candidate Iafeta is also running for 10 other positions and describes himself as “deeply passionate” about “shaping ANUSA into an association that solely focuses on students”.

Arts and Visual Arts student Beatrice Tucker is running under the ticket ‘Grassroots ANUSA’. Tucker cites their experience as a student activist to justify their suitability to the role. Tucker claims to be an active member of the National Tertiary Education Union and was the 2020-21 convenor of the Australian Student Environment Network.

Running under the SAlt aligned ticket ‘Left Action’, Grace Carter states they are a “proven, experienced activist” who has “most recently run the anti-outsourcing NHC campaign on campus”. Carter is also running for NUS Delegate.

First year Public Policy and International Relations student Lucy Skelton is running under ‘Get Sh!t Done For ANUSA’. She leverages past experiences with local, national and international not-for-profit groups which have allowed her “to take action on social justice and environmental projects”. Skelton is also running for NUS Delegate.

If elected, how will the candidates approach the role?

As a first-year student, Skelton hopes to “bring the more forward-thinking visions of [ANU’s] younger students to the forefront” and to “actively connect” with first years during her term.

Iafeta’s campaign is rooted in his desire to “be a good [person]” by “increas[ing] the welfare of [his] fellow ANU students”.

Carter aims to “reorient [ANUSA] towards left wing activism” by taking an “oppositional and confrontational approach to uni management”.

Tucker states they hope to empower students at a “grassroots” level through “upskilling, and by making space for those whose access to activism is hindered”.

At the forefront of Iafeta’s campaign is his goal to waive the Student Services and Amenities Fee (SSAF) for eligible students, in an “attempt to alleviate financial burden” for those experiencing financial difficulties. Iafeta, if elected, will develop an eligibility criteria for students to “opt-out” of SSAF.

Tucker aims to continue the success of Not a Dollar Less – a campaign that “successfully maintained ANUSA’s funding” in 2020. They aim to increase the revenue raised in 2022 to reflect the “massive” amount of financial, legal and academic assistance provided by ANUSA to students.

Cuts to Courses and Staff

Tucker cites their own experience with course cuts in the School of Art and Design and emphasises their desire to “seek out and empower working groups within the struggling pockets of the university”. Grassroots claim the current Edcom system “doesn’t function for time-poor students”, and will instead actively seek out students who are experiencing “institutional problems” with the University and develop campaigns from this renewed outreach.

Carter believes course cuts are the result of “counter imposed interests” between University management and students. They said the “only way” to fight against course and staff cuts is by “exercising our power as students” by engaging in activism that is “anti-management first and foremost”. The ticket is of the opinion that “students [should] take an oppositional and confrontational approach to Uni management” by developing an activist student union.

Skelton will pay particular attention to continue and rampen up activism campaigns against fee hikes and course cuts at ANU. She will specifically predicate her campaigning (on a national level) on behalf of 2020 Arts, Law and Commerce students who have experienced fee hikes as a result of federal government policy.

Skelton has said the fee hikes to humanities degrees are “utterly ridiculous” and will discourage lower-SES students from undertaking tertiary study that will “increase their chance of overcoming intergenerational poverty”. She aims to adopt a “multi-pronged” approach that will include lobbying, petitioning and rallying.

Tucker plans to organise workshops aimed at increasing skills relating to student activism, such as planning campaigns, liaising with stakeholders and hosting student forums. They also plan on conducting optional workshops for Department Officers to develop their campaigning skills. These are proposed as methods to achieve Tucker’s larger goal of mobilising the Education Department into a body which reaches a larger berth of the student body.

Skelton aims to hold an Activism Camp during the Winter break to “upskill” students’ activism skills, which she believes will combat the difficulties that young people face with “taking action because they don’t know where to start”.

She additionally plans on creating an in-person notice board in Kambri which will “make activism more accessible”. She will also implement policy to “encourage the intersectionality of all activist work” and to “facilitate a safe, inclusive and diverse activist space”.

As mentioned, Carter from Left Action will take a “confrontational” approach with the University. SAlt have long considered lobbying with University admin and federal government a futile approach, and criticize those who partake in lobbying.

Iafeta stated he “supports activism on issues that directly impact students” and will work to “attack on-campus problems”.