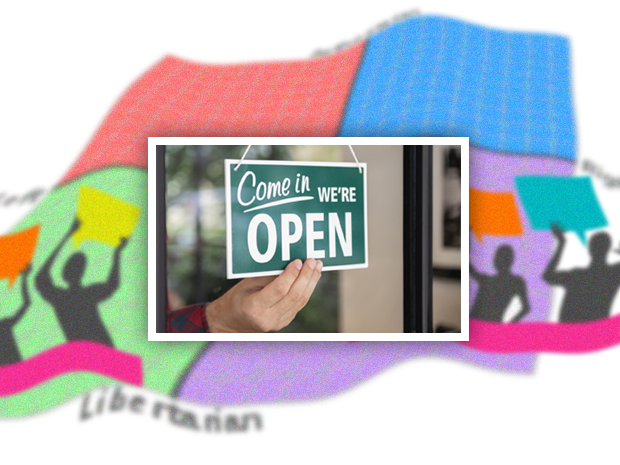 Socialist Alternative (SAlt) have remained consistent in their firm opposition to ‘opening up’ so long as there remains COVID-19 transmission in the community. Despite not having any elected representatives in SRC, they have utilised the democratic elements within ANU student politics to propose motions which have forced ANUSA’s elected representatives to engage in difficult debates. The ‘Lockdown to Zero’ campaign, along with ‘Health Before Profits’ raise pro-lockdown sentiments justified by the fear of a looming public health crisis resulting from widespread transmission of COVID-19.

‘Health Before Profits’ opposes the plans “being pushed by the Morrison government suggesting that in [the] future we ‘live with the virus’”, as well as the “Barr government’s moves to re-open in October.”

A key point of the motion was to advocate for the installation of HEPA-standard filtration systems – before ANU students and staff eventually return to campus – to improve indoor air quality at ANU. “This is a bare minimum of what a safe campus would look like,” reads the ninth point of the motion.

Another motion, proposed by SAlt and passed at the EC meeting, urged the EC to “take a political position [regarding] the rise of the anti-vaxx, anti-science, fascist right in Australia” , a SAlt spokesperson told Observer.

The spokesperson added “the position of the EC [is] on the side of public health – important when very few bodies in greater society are”, and that “left-wing institutions… must offer a left-wing lead”. They framed the “question of COVID response [as] the key left-right question in Australian politics at the moment.”

The Socialist Alternative have labelled themselves as offering a “left-wing lead”, criticizing SRC members and attendees who spoke about the negative effects of lockdown. One of these members, Max Evans, was particularly criticized for being a self-professed “card-carrying member of the liberal party”.

“SAlt has made this a really good wedge issue between those on the left and right,” said Evans at SRC 6. In a comment to Observer, he continued; “most motions passed by SAlt at SRC meetings are simply virtue signalling from a fringe group”.

SAlt have characterised that people who are right-wing support “anti human politics”, a claim which Evans refuted.

“Lockdowns cause immeasurable human harm,” he said, conceding that “while they might have saved lives in the past”, our accelerating vaccination rate means, “[we need to] support people getting back to living”.

Evans also added that “if by some miracle we do get to zero… it would only be a short time before another case emerges”.

“Victoria’s 7th lockdown… has only resulted in more than 2000 cases a day after 11 weeks,” Evans continued. “It just doesn’t work.”

SAlt have also repeatedly criticised “people saying we need to open the economy and open business over saving human life.”

Evans said although he is “obviously sympathetic to economic interests in the reopening,” he didn’t consider them to be “the biggest factor”. “Students want to get back to living,” he continued, “they don’t want to spend more time locked down in a city that is… one of the most vaccinated cities in the world”.

The ACT’s vaccination rates, currently the highest in Australia, still fall below the ANU-recommended number of 90%. This study stipulates that reopening the country with any less than 90% vaccination rate could result in “approximately 25,000 fatalities and some 270,000 cases of long covid”.

The ACT has >95% first-dose vaccination rate, and 80.7% of second-dose vaccinations. Under the ANU’s recommendation, opening at these numbers could potentially be catastrophic, despite the national plan being aimed at 80% double-vaccinations.

In this vein, SAlt’s ‘Health Before Profits’ motion supports “public health” above all else. However, as Evans pointed out, coming out of lockdown is not a simple dichotomy between health and profits.

An economic study done in Italy in July 2020 called lockdown “an unprecedented fiscal challenge”, stating that “in the absence of targeted lines of intervention, the lockdown would most probably induce a further increase in poverty and inequality”.

The American Institute for Economic Research recorded the “largest economic contraction in modern history” as a direct result of lockdowns and the pandemic.

And a new, working study published by three researchers from Duke University, John Hopkins University and Harvard University earlier this year showed a startling link between economic shocks and excess deaths. They estimated that “the size of the COVID-19-related unemployment shock, depending on race [and] gender, [could result] in a 3.0% increase in mortality rate and a 0.5% drop in life expectancy over the next 15 years for the American population”. They also estimated that “these figures translate to a staggering 0.89 million additional deaths over the next 15 years”.

The researchers urge that although ‘[they] do not want to suggest that policymakers should refrain from ordering lockdowns…  [policymakers] should provide enhanced health and economic support for the most vulnerable portions of the population”.

During SRC 6, SAlt members stated that supporting “business” and “economic interests” are not “left-wing” sentiments, despite the opposing claims that opening the economy would support social, and potentially public health, interests. However, they did acknowledge that extended lockdowns – as was advocated for under the ‘Lockdown to Zero’ campaign – would necessitate “substantial income support” and stated as such in their proposed motion.

While the ACT roadmap out of lockdown continues to progress and expand, SAlt looks to continue their fight for greater consideration of public health. In ANUSA’s OGM, taking place on 20 October, SAlt will push the union to take a stance and make proactive decisions to ensure a COVID safe campus.