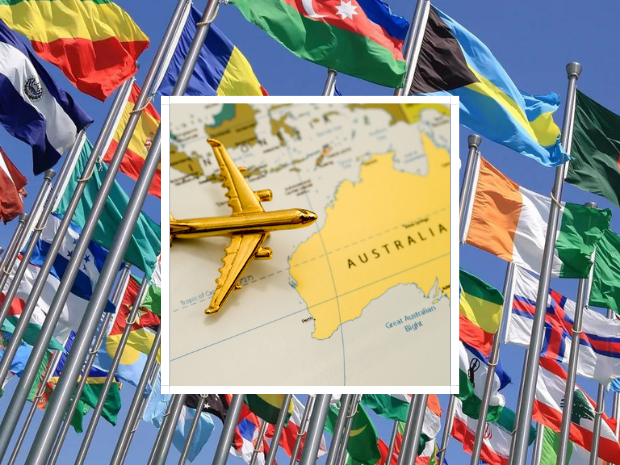 As of late last year, ANU had more than 8000 international students enrolled, from over 10 countries.

Australia’s strict COVID measures previously meant students who had returned home overseas during the beginning of the pandemic could not return. Commencing students could also not travel to Australia.

With COVID spreading at an unprecedented pace, ANU students all over the globe shared their stories with Observer. This included students unable to study remotely due to small courses, students who decided to stay in Canberra, and students who experienced the full dangers of COVID-19 in their home countries.

Throughout 2020 and 2021, there was no end in sight for the closed borders, creating a tough dilemma for many: Start studies online, defer their studies or switch universities.

When on October 1, Prime Minister Scott Morrison announced Australia’s high vaccination rates meant borders would slowly re-open, hope slowly crept back into students overseas. However, not everyone was convinced Morrison would stick to his promise.

The international borders are now opening even further, with tourists being allowed back since February 21. This signals a major step in Australia’s effort to go back to a ‘normal’ life. International students are hoping that the worst is behind them.

Observer interviewed three international students, in Canberra and on-campus, each with their own unique story.

Moving from the desert in Peru to the bureaucratic capital of Australia is not a lifestyle change you quickly think about. For Daniela Fer, it was a move which she has finally been able to call a reality with the borders re-opening.

ANU was instead “a bit more flexible about me not having to be an engineer in order to study applied cybernetics”, Daniela says. Australia’s borders closed midway through her application, which she started in early 2020.

“My application was going well, then [ANU] told me ‘oh sorry, because of the border situation we don’t think that international students are going to be allowed in the country”.

Looking back on this, Daniela sees the funny side. At the time though, it was “very frustrating”, she laughs.

Daniela said it was an “amazing” feeling when the borders opened, since “I was going to try anyway [to get into the master program]”.

Despite this, getting to Australia was not a simple task. “Before the pandemic, if you wanted to come [to Australia] from Peru, all you had to do was go to Chile, and then take a direct flight from there. But because of the pandemic we closed borders with them”.

“I spent like forty hours flying” Daniela tells me, with her route covering four continents. She went first from Peru to Amsterdam. From Amsterdam, a 13 hour flight took her to Asia. Finally, a 7 hour flight from Singapore into Sydney.

I asked her if she’s enjoyed her brief time in Canberra so far. “It feels safe, as a woman to work in here is really comfortable”, which is “really different” from Peru, Daniela says.

Her favourite thing in Canberra? “Maybe the people, everyone is really kind … here everything is very quiet, back home everything is noisy” she tells me.

Back home in Peru, Daniela tells me her city is “in the middle of the desert, middle of [the] Andes and it’s surrounded by three volcanoes, it’s very dry.”

As we walk across campus, perhaps it’s no surprise then that Daniela asks if we can continue walking when it suddenly starts to pour down with rain. The joy on her face is undeniable when we continue to walk through the rain. “In my city, it rains in January and February and that’s it. It’s very sad” she tells me as people around us run for cover.

As the rain dies down, I ask Daniela what she is most looking forward to. “Finishing my masters … I like it here, but my focus is on finishing my Masters” she laughs.

Jawwad Ahmed applied to study at ANU in January 2020, back when COVID did not exist. Living in India, Jawwad decided to defer his first semester in the hope the borders would open, but this eventuated into “two semesters online before coming to Australia” he says.

“[The] border closures shifted me from [the] traditional learning environment to the online Zoom classes, which was a hard hit for me and quite difficult to dwell in the new environment” Jawwad admits.

For Jawwad, the remote studies resulted in a temporary pause of his Masters of Machine Learning degree. “Last semester was frustrating for me because I just couldn’t take online classes anymore”. He was “really happy” when the borders opened late last year.

Being in Canberra after a nearly two year wait, Jawwad tells me “I really am enjoying my time at ANU and Canberra now, as I get to do live classes, attend tutorials and have a nice interaction with my fellow classmates.”

When asked what his favourite place in Canberra is, he said “ANU as a University has so much to explore by itself”.

Speaking to Observer, International Students Department (ISD) vice-president Hebe Ren said that for many international students “the transition from online learning to in-person learning” was something that would take some time to get used to.

“Adapting themselves for a new role/phase in life” was also exciting for many students, Ren said.

Ren continued that these activities were well received by the students, “and we are very glad to see that”.

When Syed Fawwad applied to study for ANU, he knew the borders were closed. However, with other countries already reopening their borders for international students at that point, he didn’t predict that it would take nearly a year before he would set foot in Canberra.

“I really like the coffee culture over here, the many shops everywhere. It’s not just like Starbucks” Syed says as we wait for a coffee in Kambri.

Born and raised in Qatar, Syed received several offers from Universities around the world, including London’s UCL and the University of Waterloo in Canada. But after reading up on people’s experiences, he thought that “Canberra seemed like a nice place” and with his brother already studying in Victoria, Syed decided to choose ANU for his studies.

After studying for a whole year online, Syed is glad to be in Canberra. “I like how quiet it is and how you get to meet interesting people everyday” he says when I ask him of his time in Canberra so far.

“I really like the greenery over here. That’s something you don’t get to experience in Qatar” Syed adds.

When Syed accepted his offer to study a double degree in Applied Data Analytics and Economics at ANU, he “had heard news [borders] were going to open soon” he says.

This news unfortunately did not eventuate. Whilst Syed continued to wait, the closures “turned into a semester, then that turned into a year” Syed says.

Most of Syed’s friends were happily studying overseas in countries which had opened up for international students such as Canada and the United Kingdom but Syed was stuck in Qatar, “which was pretty depressing” he says.

Many of his friends were encouraging him to leave ANU and move elsewhere, but Syed tells me it wasn’t just a simple decision.

Studying online for a whole academic year was certainly not the university experience Syed had dreamed of. An eight hour time difference resulted in classes often occurring at unreasonable times, and Syed tells me he felt the university did little to help him at the beginning of Semester One.

During Semester Two, the University was more flexible for international students – offering flexible times and support – but this support was diminished by other factors.

With other students attending in-person classes, “you definitely saw the drop in the remote experience” Syed says, highlighting it “was really hard to interact with lecturers and tutors. “Students who were studying here [on campus] could immediately ask questions”, where Syed felt he could not

For remote students, typing up questions and waiting for the teacher to respond was “a very tasking process” Syed tells me, saying that “you weren’t bothered to” after a while.

Due to this, Syed set a timeline for himself to decide whether he would move to another university if the Australian border remained closed.

“By the end of last year, I was like on the verge of leaving ANU and joining a different university” he admits.  “But thankfully, they announced back in December that borders would open for vaccinated people.”

“I did enjoy the people and the lecturers were pretty good, but I just didn’t want to study remotely.”

“I was missing out on a vital part of the university life” Syed says, “being on campus you build up your connections … networking is very important.”

With Australia’s borders now open, Syed is planning to go back to Qatar at the end of Semester One to see his family. When I ask if he’s scared of the border suddenly closing again, he tells me that he doesn’t believe it’s a likely possibility.

Syed is the Education Director for the ISD this year, where his role is mainly addressing educational issues and helping students navigate administrative processes.

As the rain starts to fall in Kambri, Syed tells me he’s not looking forward to the Canberra winters. “The lowest temperature I’ve ever experienced in Qatar is like nine or ten degrees” he laughs. But he insists he is well prepared for the winter months, with many winter clothes.

The minister notes that before the pandemic “international education was the ACT’s largest export sector, contributing more than $1 billion to the economy and supporting 2,600 full time equivalent jobs.”

With the worst of COVID behind Canberra, Minister Barr said “international students will help support the recovery of our local businesses and our economy more generally.”

Barr said that the opening of borders to tourists will also mean “visiting friends and relatives of international students are also now able to travel to Australia and visit Canberra. This provides [a] further boost for our tourism sector.”