The Canberra Food Co-op: Everything You Need to Know 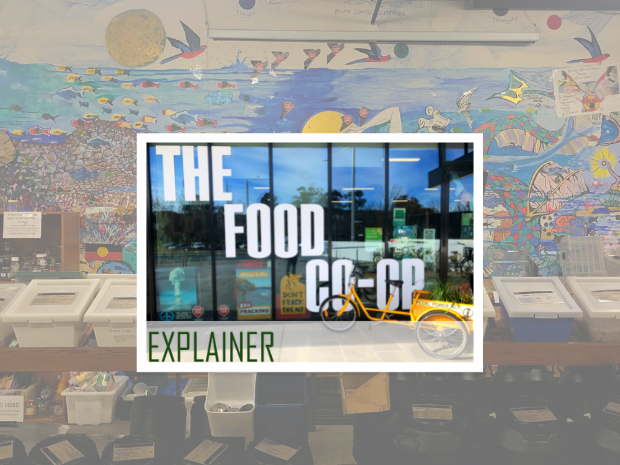 The Canberra Food Co-op, located beneath Lena Karmel lodge, is the oldest food cooperative in Australia. Originating in 1974, the co-op started with a group of ANU students pooling their income to collectively buy cheaper food products in bulk. The Food Co-op officially became active in 1976, beginning its operations in a brick and mortar building.

At their Lena Karmel site, product is stored in fridges, barrels, and shelves donated by various stores. Observer was told that the current fridges were contributed by a closed down vegan grocery store at 20% of their market value. 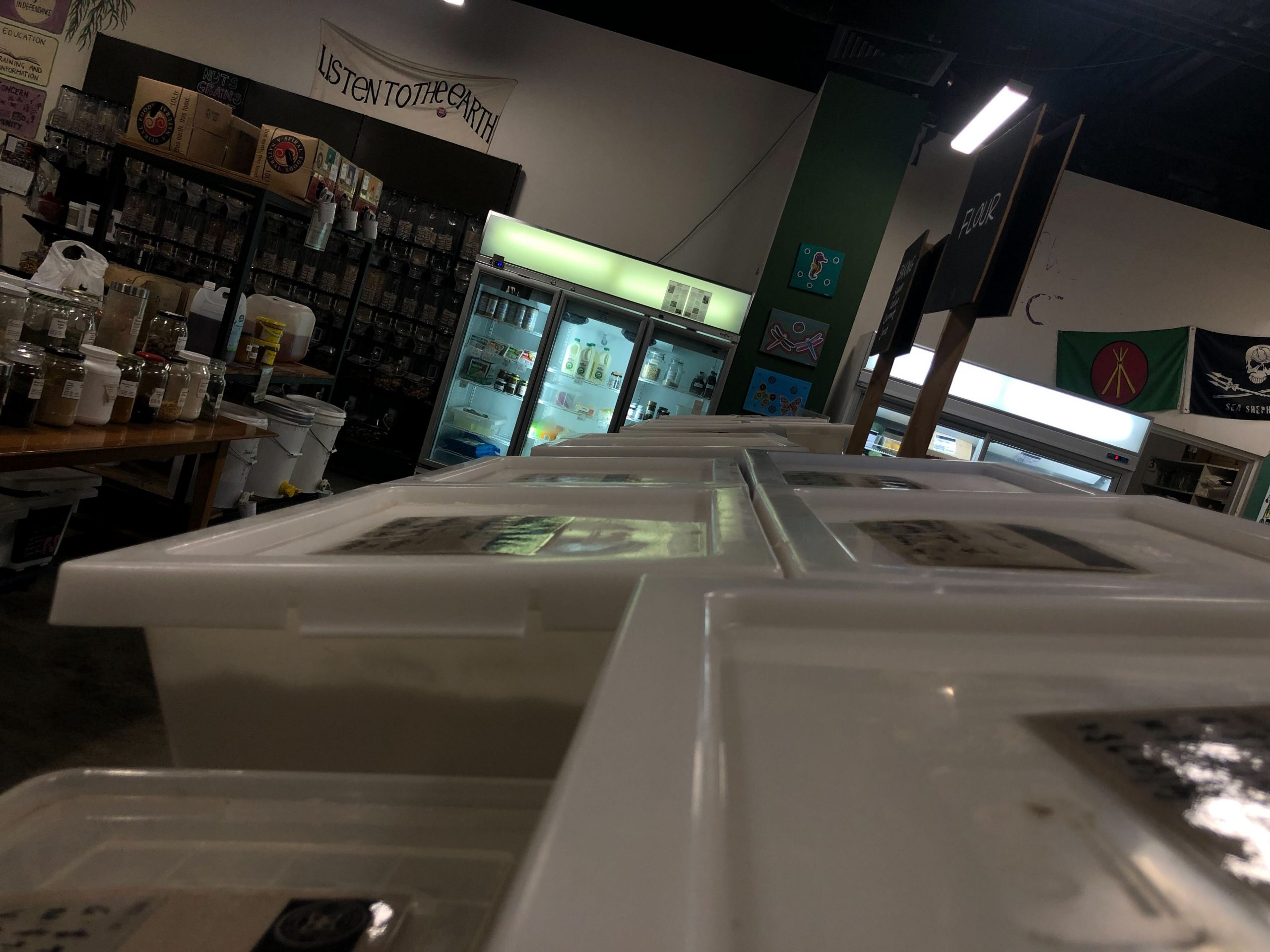 The majority of equipment used by the Co-op was donated or bought at a discounted price.

The Co-op is run by volunteers who are administered by a permanent group of managers and a board. Volunteers range between the age of 18-70, as do members of the board. Their Events and Communications Manager, Yani,  told Observer, “the age distribution of the board is bimodal. Pretty much concentrated around people thirty and sixty years old.” The Co-op offers price discounts for members and volunteers, as well as store credit for members who volunteer a certain number of hours per week.

Money spent on lunches and products at the Co-op are entirely reinvested into itself. Funds that are not spent paying for the lease are used to buy surplus product or to pay the administrative staff. The Canberra Food Co-op is not for profit.

During the height of the semester, the Co-op typically serves around 100 people per day. Yani told Observer that approximately 70% of their customers are ANU students. Currently, ANUSA provides free lunches from the Co-op which can be accessed by filling out an online voucher application.

Beth, an ANU student told Observer, “I started coming regularly when I was a first year student because it helped me transition away from home, like, it felt so comforting and familiar. I do so many assessments here!” She described the atmosphere and aesthetic, “it doesn’t really have a set look, because it’s kinda everything.”

A handful of customers are regulars from the city. Steven, who works at a nearby consulting firm, said that food from the Co-op is the only reason he is in shape. “This is pretty much the only healthy food I get,” he quipped. Volunteers at the Co-op know the regulars by name, often asking friendly questions about their life as they serve them.

The Co-op sells base produce like fruit, vegetables, cereals, and rices below market value. Two shopfronts operate in the same space, one for selling product, the other as a cafe. Between 12am and 2pm, the cafe serves a cooked lunch for $10 on weekdays and $15 on weekends. The product shop front operates between 10am to 7pm on weekdays, and 10am to 4pm on weekends. 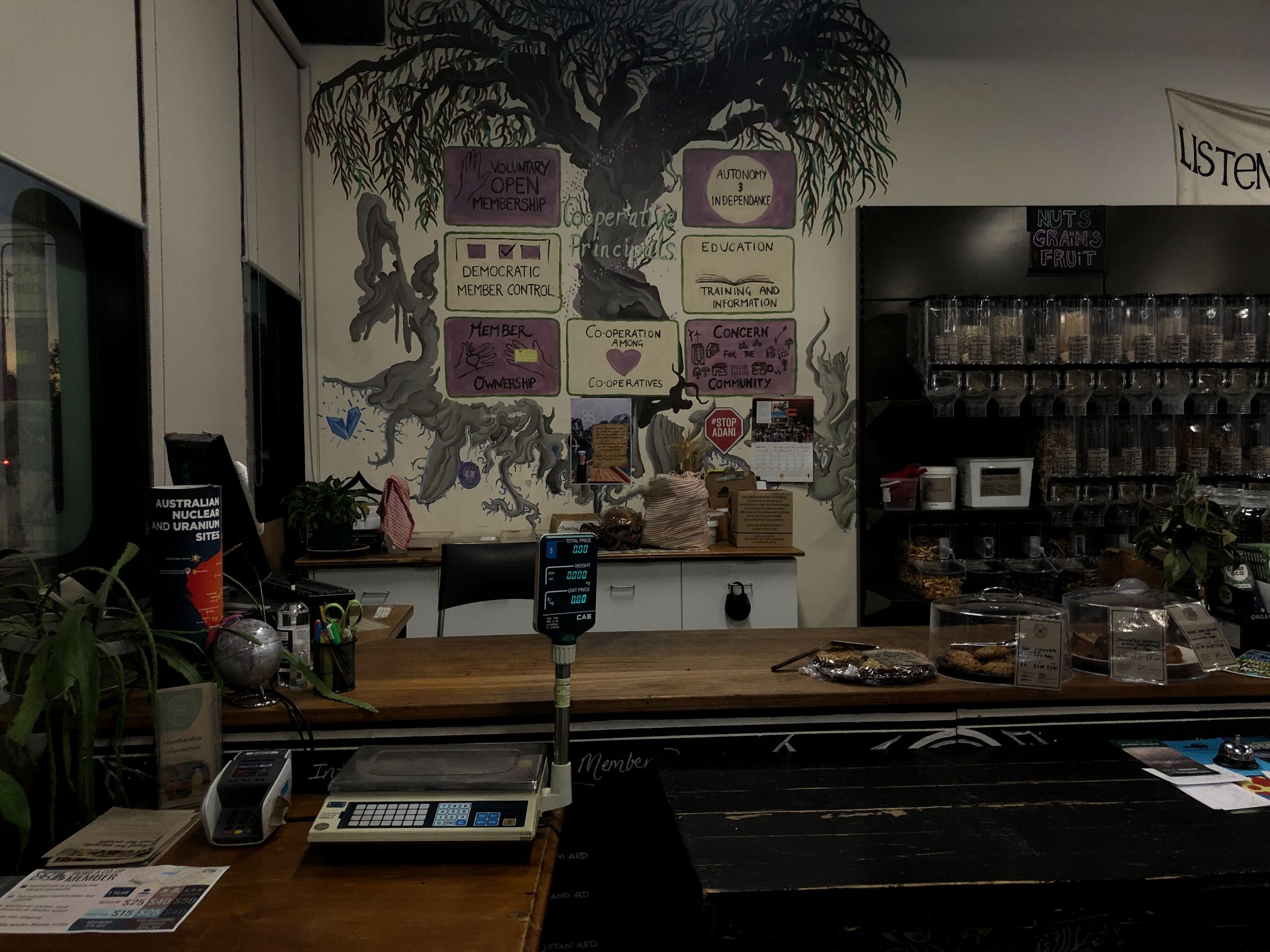 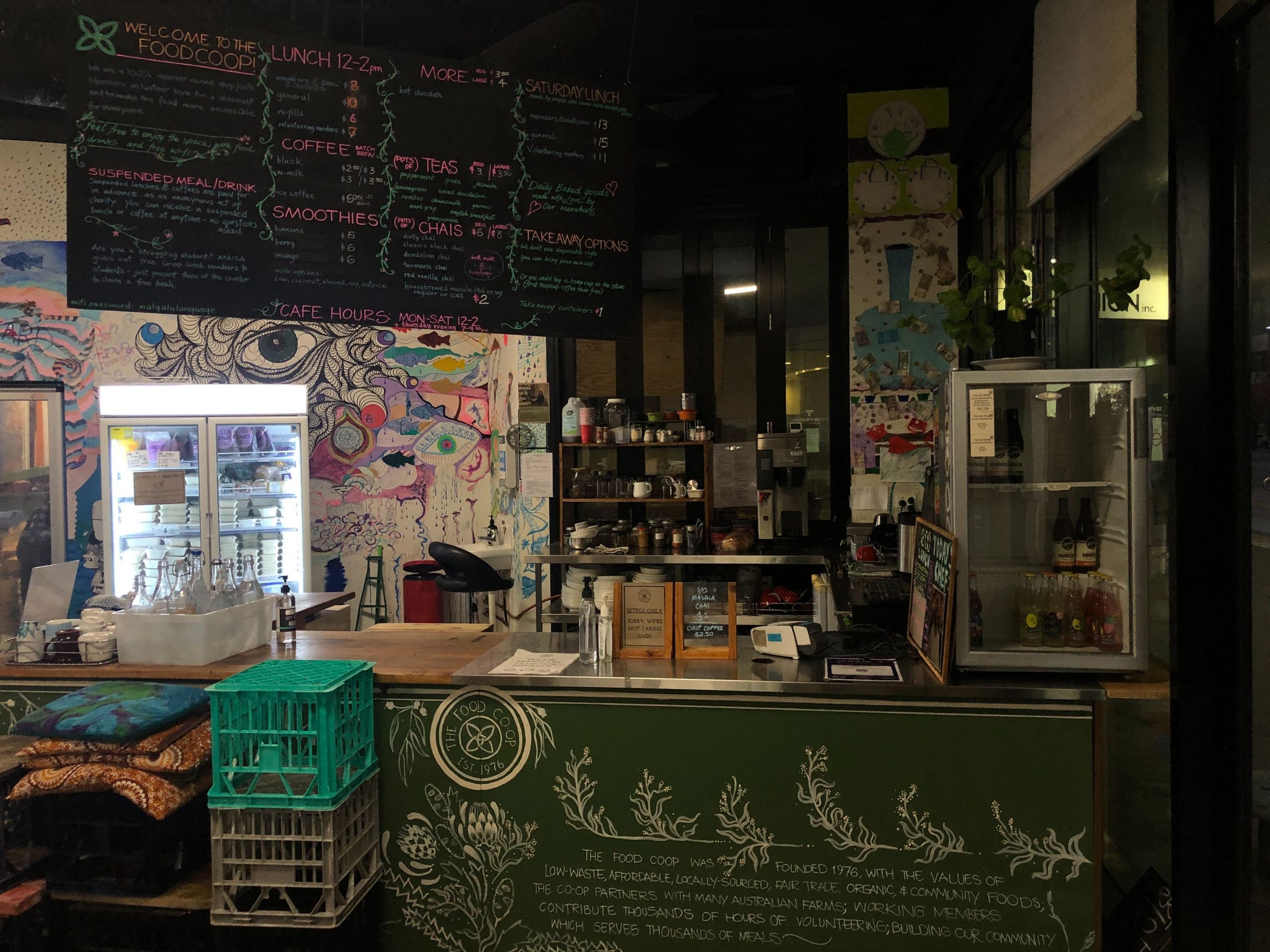 “Some of the mural was done by famous graffiti artists from Melbourne,” one of the attendants mentioned. She gestured to a black and white tentacled eye behind the coffee machine, and a bleeding heart spray painted on to a load bearing pillar. “People ask us when we are going to get rid of the eyesore, but I’m thinking we could even paint the floor.” 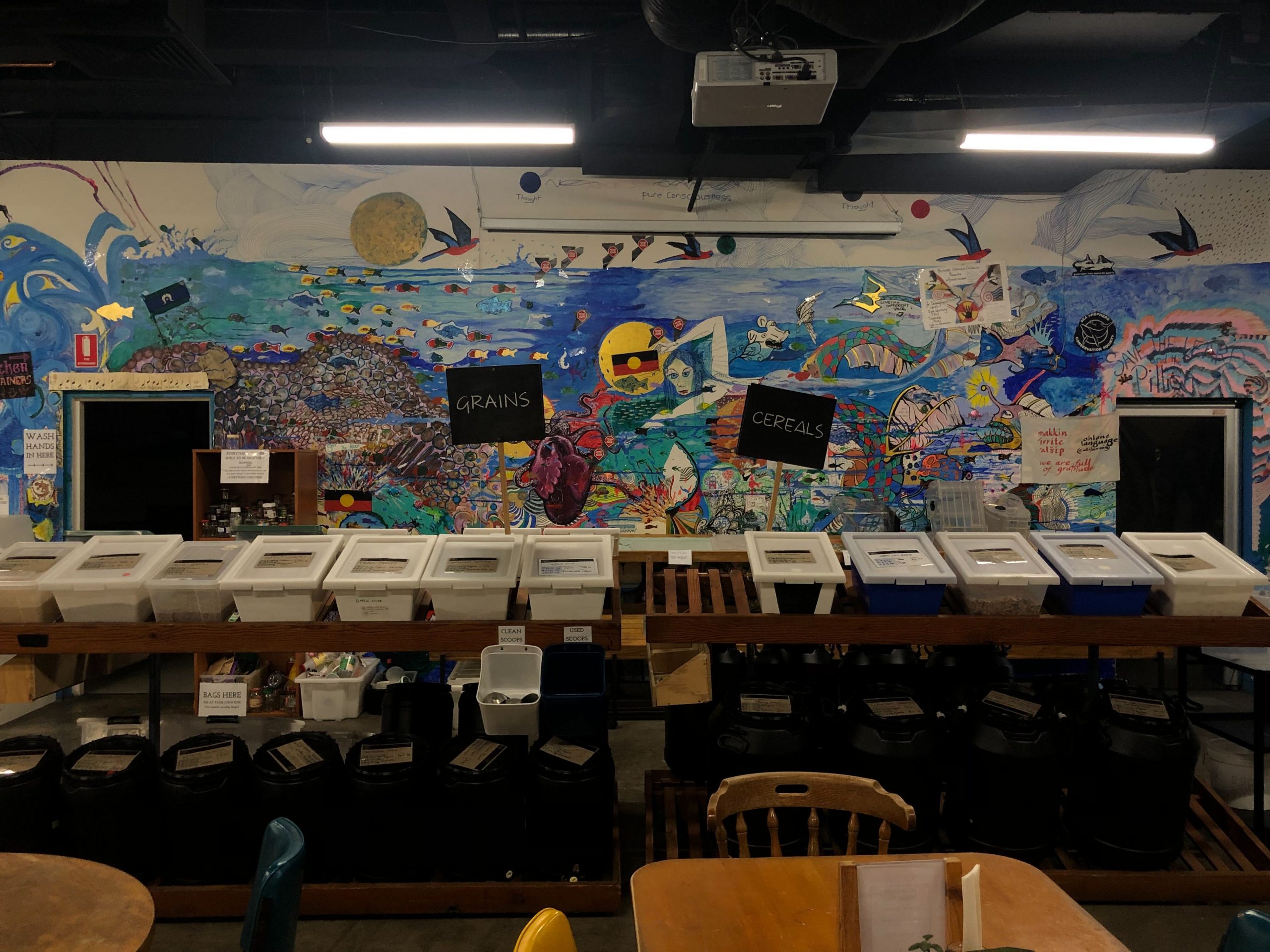 The mural covers half of the Co-op’s wall space. 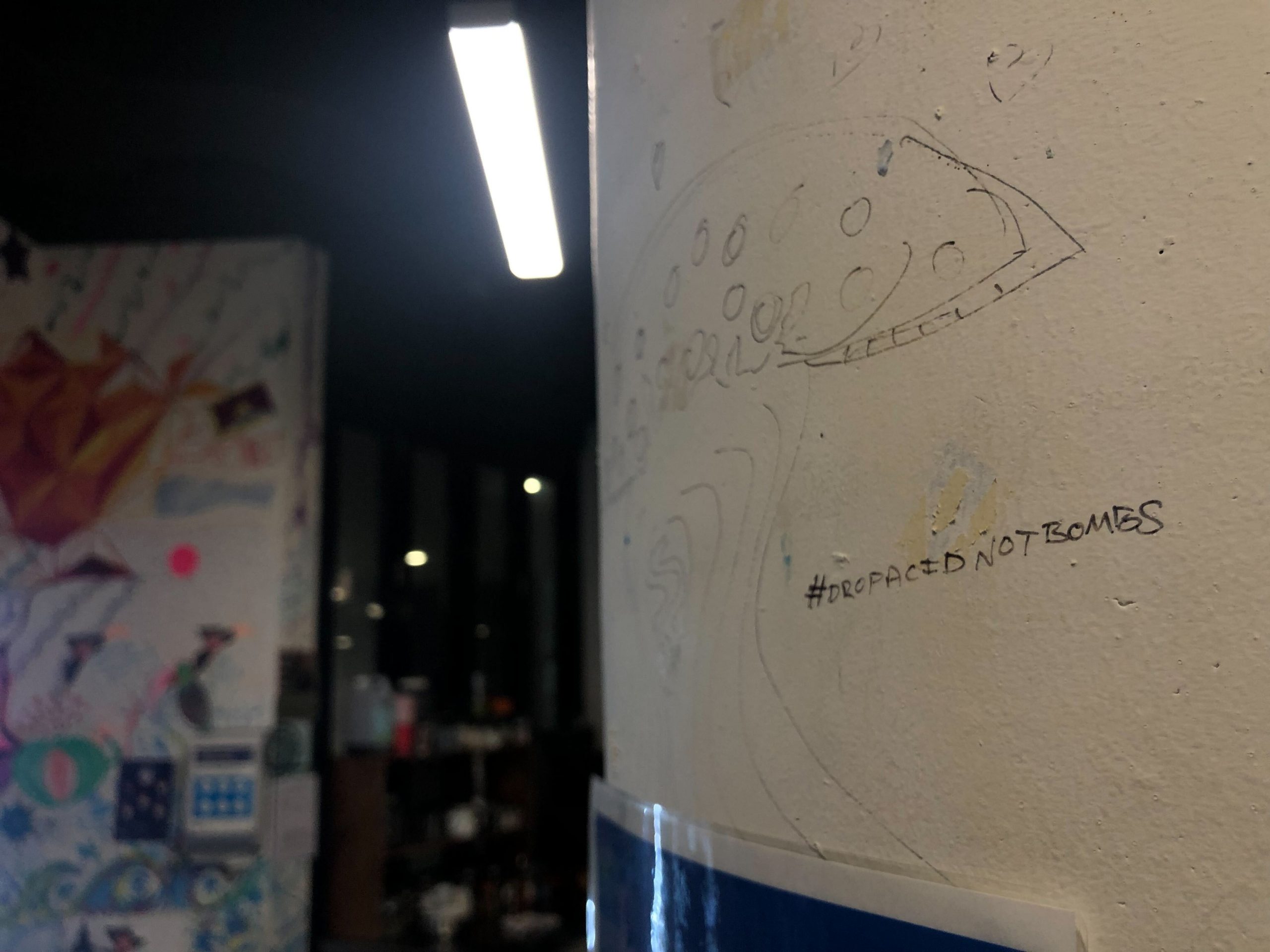 Activist banners, stickers, and phrases are scattered across unused surfaces.

Goods sold from the product shop front include culinary bases like flour and wheat, which are stored in plastic drums with aluminum scoops. This front also sells goods, like a collection of Star Wars themed ‘Keep Cups’, jars of sauces, handmade chocolate and women’s sanitary products.

The majority of product sold at the Co-op is sourced from local Australian farms. 59% of the product is nationally sourced, the other 41% is imported. Behind Australia, the largest contributors of product at the Co-op are Bolivia, Turkey, Canada, and China. Notably, ‘Zoo Pasta’ imported from Italy and ‘Celtic Sea Salt’ imported from France. 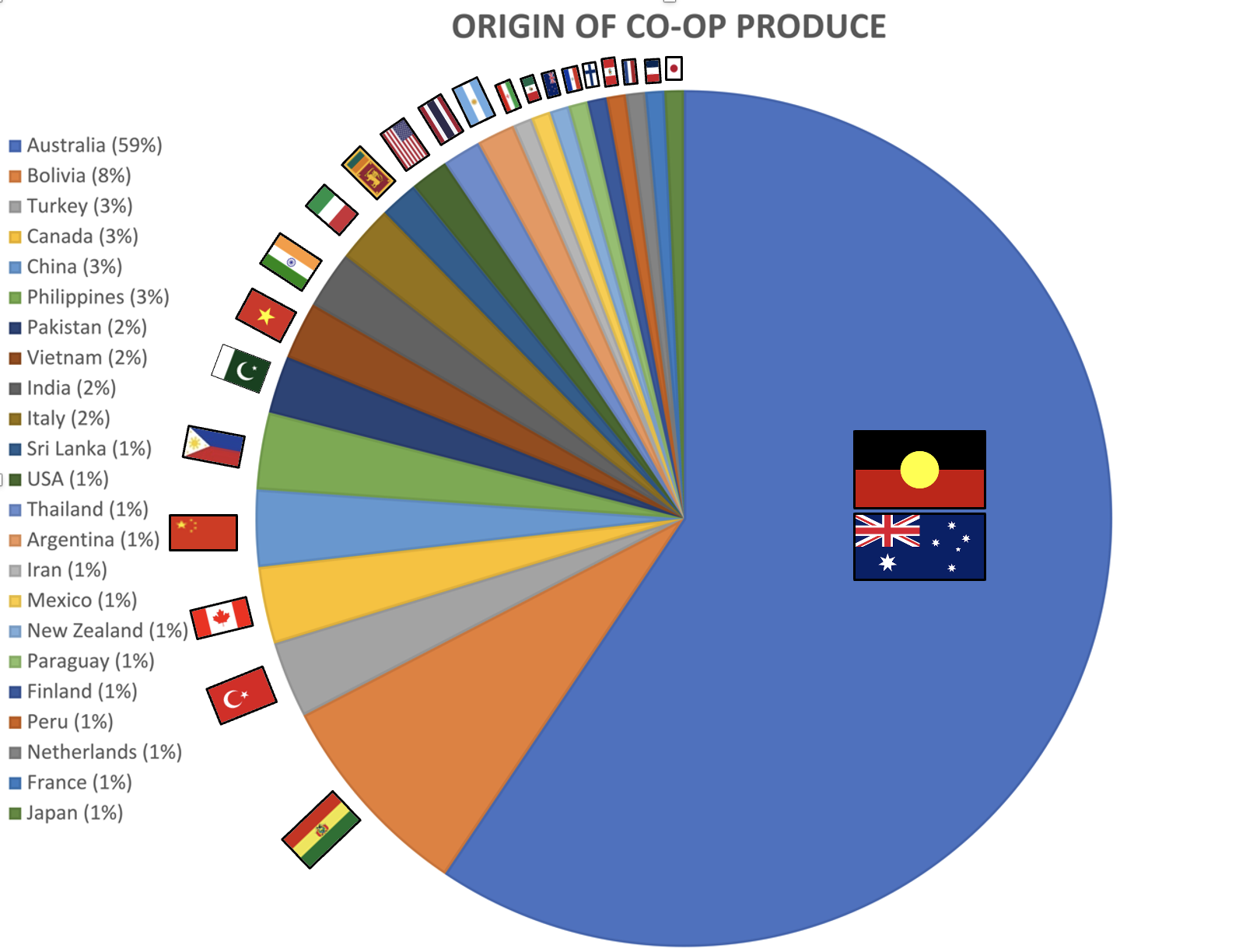 The cafe front serves beverages as well as lunch. Their menu includes various types of coffee smoothies, tea, chai, and hot chocolate. It also includes an option for a ‘suspended lunch’. A suspended lunch can be paid for by a customer in advance, and claimed by whoever needs it. The Co-op’s Events and Communications manager told Observer that there are about 200 suspended lunches in the bank.

When asked if the prices were ideal the spokesperson for the Co-op responded, “honestly, no. In an ideal world we would be giving this food away for free.”