Hundreds of students from ANU and the University of Canberra today joined the Canberra School Strike 4 Climate. The strike saw thousands of children and young people protest a perceived lack of government action on climate change. ANU did not rule out penalising students who missed class to attend the strike. 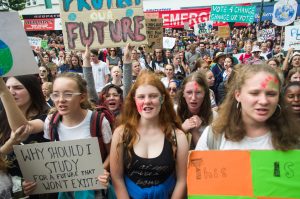 About 2000 people rallied in Garema Place for climate action.

The protest was organised as part of the School Strike 4 Climate movement, in which young people from around the world have engaged in protests a perceived lack of action on climate change. The movement was started by Swedish teenager Greta Thunberg in 2018 as a way to highlight the lack of climate policy in Sweden, and has grown to encompass students from over 100 countries.

Hundreds of people from ANU and the University of Canberra met at the Kambri Precinct at 11am to organise in support of the school students striking around Canberra. The strike occurred on the same day as fifty others around Australia, and thousands of similar strikes around the world. 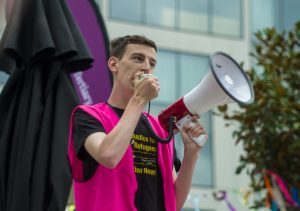 Speakers in Kambri gave their views and practised chants.

A number of speakers rallied the crowd. A representative from the Refugee Action Committee said, “it’s become abundantly clear that..we are facing one of the biggest catastrophes… in the entirety of human history.” They particularly highlighted the effect that climate change could have on the developing world, and the potential for climate refugees.

The University contingent then walked down University Avenue towards Garema Place. At times, the protestors blocked traffic travelling down Childers Street and Alinga Street, eliciting both support and annoyance from motorists and public transport. 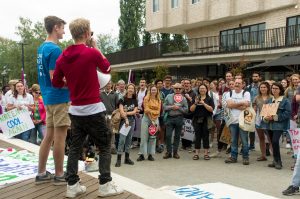 At least 200 people met at ANU before the strike.

An estimated 2000 primary and high school students from around Canberra gathered at Gamera Place, where they were later joined by the contingent from ANU. Most of the crowd appeared to be high school aged, but protestors ranged from kindergarteners to retirees.

A number of young people spoke about the importance of effective climate policy in Australia. One Year 7 student addressed criticism that the strikers had faced from politicians. “To you ScoMo: you want us to stop striking. We will when you stop accepting political donations from fossil fuel companies,” they said. Another student gave a musical performance. 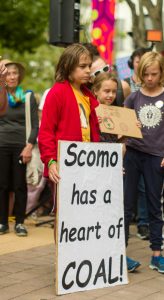 Students from kindergarten up took part in the strike.

A number of schools, universities, and organisations have publicly supported and encouraged the student strikers. This week the University of Sydney explicitly stated that it would not penalise students who decided to take part in the School Strike 4 Climate on Friday. Alison Barnes, President of the National Tertiary Education Union (NTEU), said that “the NTEU urges all members to show support for the student strike and ensure that… students who attend the protest will not be disadvantaged academically”.

When asked if striking students would be penalised for missing class to attend the protest, an ANU spokesperson said the University believed that  “those who participate [in the climate strike] will do so mindful of any commitments they have on campus”. The spokesperson said the University “takes action on climate change seriously”, highlighting ANU’s research on the topic.

ANUSA Environment Officer Nick Blood told Observer that it was “unfortunate that ANU didn’t officially endorse this action”. “We asked the ANU Executive if they would be interested in supporting this action and the response we got was essentially a no,” he said. He acknowledged the work ANU is doing on climate change, but said the University has “a long way to go”.

Reporter Sofia Berezin had no involvement in the writing or editing of this article.