International student fees will increase at ANU by an average of 9.5% in 2018, up from 5% the year before, while domestic fees will remain at current levels. International students already pay substantially more for their degrees in Australia than domestic students, and this gap continues to increase. ANU currently has lower average fees than both the University of Melbourne and UNSW, but will see a far larger increase in fees in 2018 than either university. 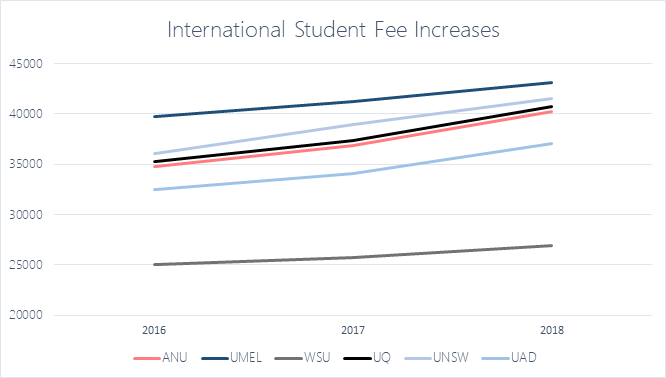 In response to the fee increases Winson Widarto, the 2017 International Students Officer, stated that “a decrease, or a slower paced increase in international tuition fee has been something … ISD … has been endeavouring and dreaming to work on, and it’s sure to be an outcome that all ANU international students would love to see.”

Deputy Vice Chancellor (Academic) Marnie Hughes-Warrington told Observer,  “The university undertakes a multi-tiered review of its fees annually to ensure our fees are appropriately based on market rates and enable the provision of appropriate levels of education and support.”

Engineering and medical science represent outliers from the average increase of $3,500, with increases of over $4,000. Medical science has been the most expensive degree overall since 2016 at ANU, totalling $48,000 in 2018. The only degree to decrease in cost is Asia Pacific studies, which will decrease by 2%, although a Bachelors in Genetics will only increase by 4%, in response to a jump the previous year. 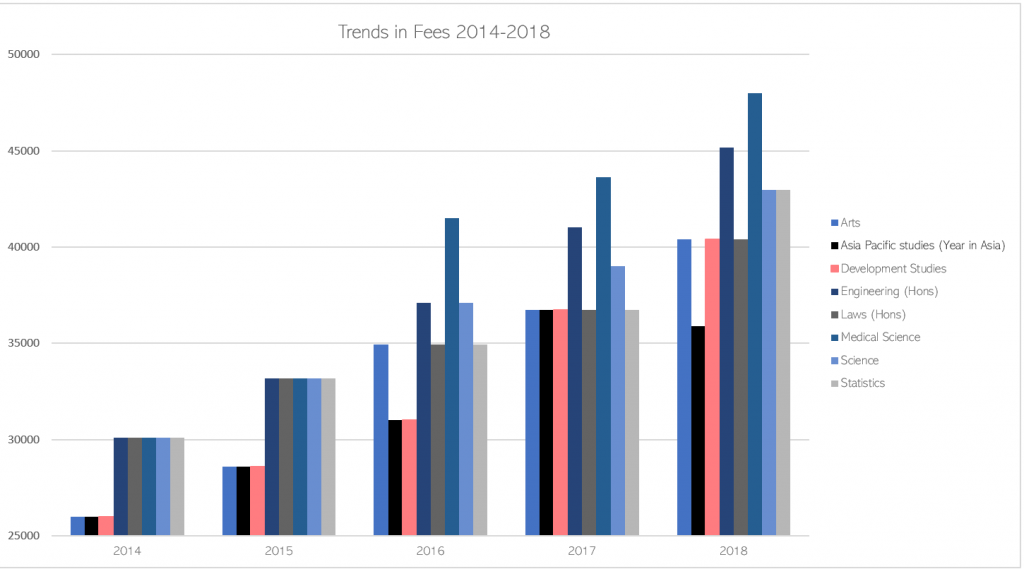 Domestic fees are capped at a standard three tiered rate, but a current governmental push for cuts may see an increase of 7.5% by 2021. These fees are for one year only, and apply to all international students, not just new entrants. If a student’s course continues beyond one year, they will be charged the additional costs.

Melbourne remains the highest international fees within the GO8 overall, although it only increased 4.4% to ANU’s 9.5% in the last year, on average. ANU remains in the middle in terms of fees, despite its ranking as the 7th most international university in the world, according to the 2017 Times Higher Education international universities rankings, based upon its ability to attract students from all over the world. Such averages are based on overall increases, and don’t account for differences between courses held through the university, such as undergraduate medicine or dentistry.

Australia relies on international education as its third largest export but a “foreign degree isn’t the edge it used to be [in China],” suggested Amanda Barry, the ANU’s China liaison director in an interview with the Sydney Morning Herald. This contrasts with the increases in cost that have occurred in a number of major universities.  In 2016, international students made up 35% of the ANU undergraduate student population, while around Australia they make up 25.8% of students, and contribute to an industry worth more than $21.8 billion a year.

Monash university was not included in the data set, due to unavailable information before 2018. Figures for ANU were based upon information in the programs and courses guide.