“Notoriously Difficult to Navigate” – Why the H.C Coombs Building is the Way it is 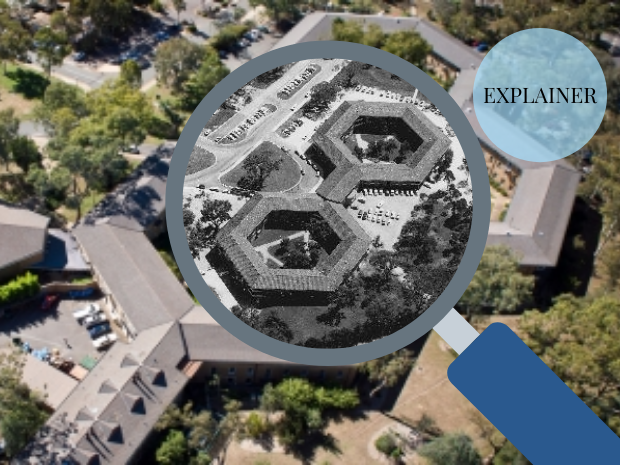 Most ANU students and teaching staff at some point in their time at ANU will walk the corridors of the infamous H.C Coombs building. Recognised on the School of Philosophy’s webpage as “notoriously difficult to navigate”, Coombs is one of the more unique buildings on campus. Known for its hexagonal structure, tutors and Professors often recommend that their students arrive at least 15 minutes before scheduled consultations so that they can find the relevant office on time. Arbitrarily numbered offices, confusing staircases, hard to read maps, and broken elevators are just a few traps which may leave students aimlessly wandering the hallways of the building. As students and staff prepare to return to campus, Observer looks back through the records to understand why Coombs is the way it is.

In 2014, a number of ANU academics, many of whom worked in the Coombs building for a considerable amount of time, wrote and published a book: Coombs: The House of Memories. An ANU spokesperson told Observer that the University considers this book to be the “official history” of the building. Part memoir, part history, the authors reflect on interesting moments and anecdotes from the building, as well as its initial construction and design.

Before Coombs, both the Research School of Social Sciences and the Research School of Pacific Studies were housed in the Old Hospital Building (OHB), located on the southern end of campus. The OHB was always intended as temporary, and both of these major departments required a permanent home which could meet their spatial requirements. The Coombs project was born, with the official opening held on 11 September 1964.

The Design and the Hexagons

Coombs is distinctive from the “bland concrete multi-storey structures” which began to spread around campus as part of the development of ANU. To determine requirements for the new building,  J.W Davidson, Dean of the Pacific School, and Keith Hancock, Director of Social Sciences, led a committee to understand staff opinions and design proposals.

To accommodate for the social dynamics of the research school, the building had to capitalise on the closeness between staff, as “virtually everyone knew everyone else and socialised with one another”. In addition, the building needed to give academics the opportunity to retreat back into their office and enjoy that sense of “scholarly seclusion”. Now containing approximately 600 rooms, the ANU Reporter has described Coombs as a “veritable beehive that buzzes with the workings of hundreds of experts”.

Other staff expressed their desire for an Oxbridge-esque model, with a separated junior and senior tea/common-room –  assumedly one for students and the other for teaching staff. This was ultimately overlooked in favour of one room, which is now the current tea room, allowing students and staff to interact and reflect on their current projects or upcoming work. While few undergrads are aware of the tea room, you may find the odd student or two buried in the corner, chipping away at their essays. Occasionally, staff trickle through to use the kitchenette, but the vision of a buzzing space where students and staff share and debate ideas remains unrealized.

Emphasised in the book was the importance of avoiding “the horror of the interminable passage”, so that one can experience the “space, light and landscape” of the Canberra surroundings. Through a limited competition, six architectural firms were appointed for designs, with a final two held under serious consideration. Both flirted with the hexagonal structure, but differed on specifics. The Grounds Plan, designed by firm Grounds, Romberg and Boyd was described as being like a “summer palace”, but was ultimately rejected on the grounds that it restricted potential expansionary plans. The successful plan commissioned to the architectural firm, Mockbridge, Stahle and Mitchell, was seen as more accommodating to future expansion when departments inevitably grew. The Mockbridge plan initially involved two hexagonal structures connected via a hallway. As the University grew, so did Coombs. A third hexagon was added, with a new lecture theatre and a lab wing.

Herbet Cole ‘Nugget’ Coombs was a suitable namesake for the building given his role in the development of ANU post WW2. Appointed as Secretary of the Department for Post-War Reconstruction, Coombs led a committee to oversee the construction of a national university, deemed necessary to stimulate the economy. Despite a University policy to name new buildings after significant deceased people, Coombs was deemed an exception as he was the “only one on everybody’s mind”. Upon the opening of the building, Coombs was described by Perc Partridge, the successor of Hancock as Director of Social Sciences, as “invaluable in protecting the good relations which have prevailed between the university and successive governments”. Following his role as Post-War reconstruction secretary, Coombs was appointed the First Governor of the Reserve Bank in 1960.

Refurbishment plans for the Coombs building were announced on 15 May 2018, with the intention of updating the design within all three hexagons. Among the project’s priorities was refurbishment of the entrance, tea room and student centre. Improvements to “signage and wayfinding” were also listed, as well as updated shared working spaces and insulation improvements. The lecture theatre remains unchanged, as it was a required teaching space whilst the Kambri project was being completed. In addition, air conditioning could not be upgraded nor improved, since there is “insufficient electricity supply” to the building. Renovations are expected to take 2-3 years to complete, with Observer understanding that construction work is still to be done.

Will the newly refurbished Coombs building remain a nightmare for students and staff to navigate? Or will the updated labyrinth allow students to appear at their consultations on time?

If you have an issue with this article, or a correction to make, you can contact us at [email protected], submit a formal dispute, or angery react the Facebook post.Want to get involved?

You can write articles, photograph, livestream or do web support. We’re also looking for someone to yell “extra!” outside Davey Lodge at 1AM. Apply today!