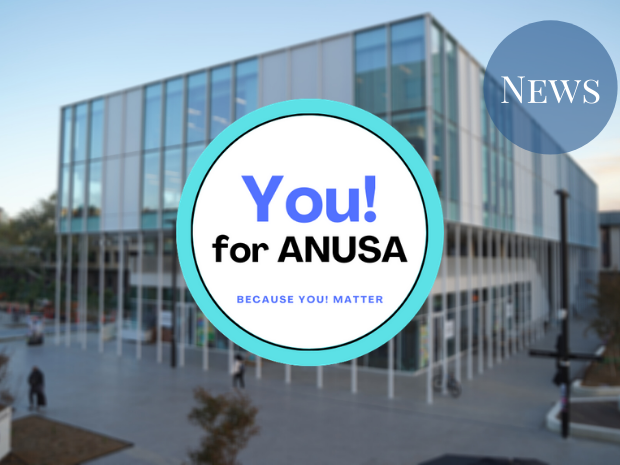 Liberal-aligned ticket, You! For ANUSA, has launched this evening for the second year running. In a press release, the ticket stated that “ANUSA hasn’t changed, [and] to make a point we haven’t changed our ticket name [either]”. Reducing “wasteful spending” and “reallocating money to practical services” are the ticket’s stated priorities, as it expects a reduction to the ANUSA budget as a result of COVID-19.

The only executive position for which You! is fielding a candidate is Treasurer. In a comment made to Observer, the ticket states that doing so allows it to “stand a better chance of creating a conversation” surrounding the “inefficient allocation of SSAF money”. Running for this position is ticket convenor Rafe Harrison-Murray, who told Observer that SSAF funding “could be spent better on improving the quality and quantity of services which would greatly improve the lives of the average student”.

In the 2019 elections, two You! candidates were elected as Gen Reps, along with CBE College Representative Jye Beardow. Harrison-Murray ran for Gen Rep, but was not elected. The ticket claims that they will change their name when “we see ANU students getting value for money from ANUSA, when we see adequate services for students, less bureaucracy and more transparency”.

In a press release, You! told Observer that it is running on a three-point platform, with additional policy details to be unveiled later in the campaign. Emphasised throughout the release was the need to enhance the “quality and quantity” of student services. Examples of such potential improvements include “improving the ANU printers”, better wifi for on-campus residents, redesigning ISIS, and “greater seating options in Marie Reay”.

Another focus of the ticket’s concerns is mental health services provided to students. You! expresses that they would like to see an “expansion” of the mental health current services offered on campus, and changes which would make them easier for students to access. You! Has not released detailed plans as to how these goals may be achieved through ANUSA. .

The final policy point the ticket highlights is the need to “reduce executive waste” by tying executive pay to the size of the ANUSA budget and “cutting unnecessary and expensive executive leadership development programs”. You! Says it will “assess for inefficiencies in the existing ANUSA budget with an objective eye” as part of their response to what they say are “likely” budget cuts to ANUSA. In addition, the ticket asserts that it will search for “vital services” which must remain “untouched”, as well as find services “which must be expanded upon”. As most You! candidates are outside “the ANUSA bubble”, Harrison-Murray claims that they can “more objectively look at the programs that ANUSA runs” so they can assess “which are the best and most important for students”.

You! is financially backed by the ANU Liberal Club. Harrison-Murray states that the “[Liberal] club has no decisions regarding policy, as the [You!] committee is independent and without [Liberal] club oversight”.