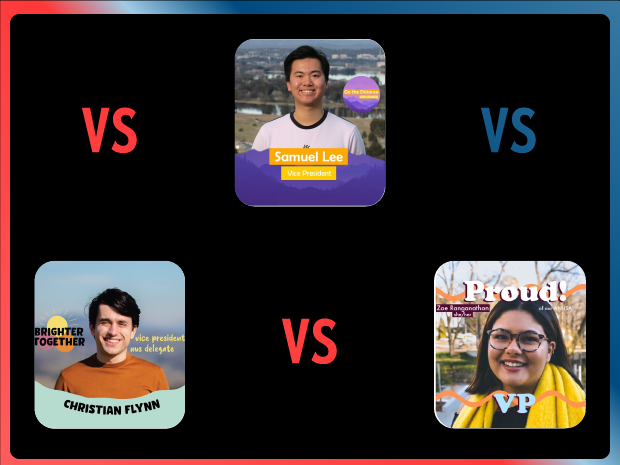 This year’s election will see Zoe Ranganathan from Proud!, Samuel Lee from Go the Distance, and Christian Flynn from Brighter Together compete for the position of Vice President. At the forefront of Ranganathan’s campaign is accessibility and inclusion of disabled students; Lee focuses on academic advocacy and mental health, and Flynn wants greater accountability, responsibility and transparency from the Association.

The ANUSA Vice-President is responsible for coordinating student appeals, addressing internal education matters, and providing pastoral care. They are also involved in student advocacy, as well as providing support to ANUSA’s autonomous departments. Additionally, they are currently responsible for the running of the BKSS.

Ranganathan is the current ANUSA Disabilities Officer, where she has pursued a number of initiatives. These include her role in drafting the ANU Disability Action Plan and in “achieving automatic transcriptions in 80% of all courses using Echo360 and securing Disability Advocates at res halls for 2021”. Ranganathan’s Vice-President platform includes a focus on the need for greater levels of inclusion for disabled students. She will also be contesting one of five NUS Delegate positions.

Lee is the 2020 ANUSA CASS Representative, a post which he holds alongside James Eveille. Lee was the Vice-President of the Society of Arts and Social Sciences in 2019. He has experience with liaising between the University and students, having played an active role in advocating on issues such as the use of Proctorio, compulsory lectures and automated transcripts in his role as College Rep. He describes his candidacy as “pragmatic, politically independent and prepared in terms of ANUSA experience”.

Flynn is the current President of Wamburun Hall and Chair of the Interhall Council. He was also previously a Senior Resident at Wamburun. This experience has guided part of his platform, in which he has pledged to better incorporate student voices into decisions on residential halls. Flynn also played a role in the launch of the Student Code of Conduct and the Online Disclosure Tool, and hopes to continue to push the university’s “commitments to address SASH on campus”. Flynn is running for NUS Delegate in addition to the role of Vice President.

Ranganathan advocates for greater training for ANUSA reps, in areas such as mental health first aid, so as to prevent the “consistent burnout and resignations” caused by previous “oversight of basic support”. In her role as Disabilities Officer, Ranganathan has ensured the continuation of “free mental health services [by] securing ANU Counselling sessions via Zoom”.

Lee plans to advocate for “more specialised counselling services at ANU”, which would include the provision of “more culturally and linguistically diverse counsellors, providing information on counselling resources [and] reinvigorating the Mental Health Committee”. He intends to elect two deputy chairs to the Mental Health Committee to encourage better representation of student perspectives with it.

Flynn’s mental health policy is focused on residential halls, where he intends to prioritise and improve wellbeing and pastoral care for residents. His policy outlines the need to provide “greater resources for our Community Coordinators and Senior Residents across campus”. He also advocates for stronger collaboration between ANU and its students to create “good pastoral care and effective support services”.

Ranganathan believes that a “restorative justice-focused response to sexual assault is the next step” for addressing SASH issues. She intends to work closely with the Women’s Officer, ANU stakeholders, and Canberra-wide groups “to chart a restorative justice strategic plan for the ANU”. Her policy states that she intends to move “beyond a system for our res halls, where Consent Matters [a compulsory online module] is seen as a one-size-fits-all approach”.

Lee is advocating for the implementation of the NOUS review recommendations, “particularly Cultural Change plans”. The ‘Cultural Change’ aspect of the NOUS review entails addressing the cultural factors which underpin SASH incidents, as well as “creating a response framework” to engage with these factors. Additionally, he intends to push for increased pastoral care staff at residential halls. If elected, Lee says he will work “collaboratively and support the ANU Women’s Department and the IHC in this fight”.

Flynn plans to implement better training for students and staff surrounding SASH issues, which includes “broader access to ‘Responding to Disclosures’ training” and ensuring that avenues of support are “consistently clear”. Like Ranganathan, Flynn also proposes a “large scale attempt to integrate restorative [justice] practices across the ANU,” which will involve more comprehensive staff training to ensure that processes “do not rely purely on student leaders”. The ‘third pillar’ of Flynn’s SASH policy is creating accountability and oversight, and facilitating an effective dialogue between the RRU and students.

Ranganathan plans to revive the Brian Kenyon Student Space, stating that the space has “has fundamentally lost importance to students” since the move to Kambri. She intends to change this by securing the BKSS as a “disability-friendly employer”, and expanding the sale of ANUSA merchandise to “create more awareness” of ANUSA and its services.

Lee intends to increase the promotion of ANUSA services and the level of “support for elected ANUSA Representatives”. ANUSA has a range of benefits and support systems for students, but Lee claims that “not enough students know about these services, especially those that need them most”. He aims to address this “disconnect” between students and ANUSA” by introducing consultation hours and creating an “ANUSA Vice President Facebook Page”.

Flynn also emphasises the “importance of promoting ANUSA’s support and services to as wide an audience as possible”. As Chair of the IHC this year, he worked with ANUSA to ensure “pamphlets and postcards were distributed to every residential hall”, and he intends to continue such activities in 2021 “in a COVID-safe manner”. Flynn plans to provide ANUSA introductions “at every Residential Hall during the Halls’ O-weeks” with the intention of expanding such introductions to other sections of the ANU community, if it is successful. He said he wishes to ensure that “students who may struggle to meet in person” have access to these resources.

In her policy outline, Ranganathan’s academic advocacy centres around support and accessibility for students with Educational Access Plans (EAP). She is advocating for the introduction of “opt-in Zoom tutorials” for students who hold EAPs in order to “move closer to disabled students accessing the same standard of education that every other student receives”. Additionally, Ranganathan intends to implement a gradual tutorial enrolment scheme to “prevent the systematic issue of lower grade marks for regional, remote and low SES students”. This will entail the opening of tutorial slots in rounds, where regional students and students with EAPs will be given first preference on enrolment options.

Lee hopes to improve the accessibility of Academic Skills and ANU Careers. Lee has stated that in his role as CASS Representative, he created academic and career workshops in collaboration with Academic Skills and ANU Careers. This is an initiative which he hopes to continue if elected as VP, with “further events and resources to academically support undergraduate students”. Lee says that these projects will be made more accessible to students through increased advertising on social media.

Flynn’s policy on academic advocacy includes protection against staff and course cuts, and the introduction of clearer feedback systems. He stated that “multiple staff cuts may be on the horizon” and he is committed to “preventing those cuts from occurring where possible”. He also raised the issue of SELT feedback going “unheeded,” and believes that “ANU should be pushed to create a prevailing feeling that student feedback is being heard”. In order to achieve this, he advocates that “SELT feedback should have clear actionables for all courses”.

Ranganathan is committed to connecting ANUSA and SRs by creating a “committee to sit under the VP portfolio”. This initiative will allow “SR’s to voice their concerns” and provide them with a platform to raise issues “through a central advocacy body”. She states that “there are large-scale and systematic issues with how Senior Residents are treated” and believes that unity between residential halls and ANUSA will create a “united front against mistreatment at the hands of University management”.

Lee said that he supports calls from the IHC and ANUSA for increased pastoral care staffing at residential halls in order to support SRs and to “take the burden off student leaders”. Lee further emphasised the importance of “high quality and ideally standardised” training for SRs and RAs, particularly in relation to Mental Health and SASH disclosure.

Flynn, who has been an SR in the past, describes the role on his Facebook page as “underpaid, undertrained and unsupported”. He believes SRs and Community Coordinators (CCs) should “receive equal pay for equal work across campus” and that these payment options “should be expanded”. Flynn intends to facilitate a stronger relationship between ANUSA, CCs and SRs to “provide greater resources… and [share] institutional knowledge”.