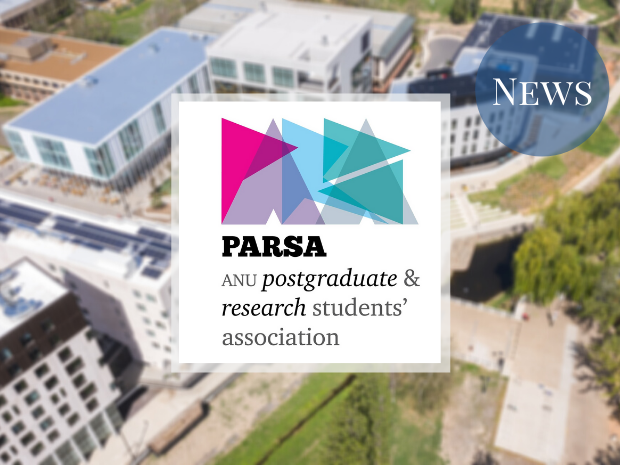 By Rebecca Zhong and Anthony Lotric

Polling for the PARSA elections commenced at 9AM today, and will remain open until 5 PM Friday 25 September. This year, portfolio, college and executive roles are being contested by independent candidates, alongside candidates from two tickets, ‘Advocate for PARSA’ and ‘ANU United’.

The PARSA Returning Officer, who is responsible for overseeing the elections and ensuring its compliance with the election regulations, announced the successful nominations on 16 September. The online voting system can be accessed here.

A number of candidates have been elected unopposed to their roles:

There are two candidates running for the PARSA President this year: Eve Walker and Petar Tankosic-Gajic.

Walker, who was PARSA Education Officer this year, is running at the top of the ‘Advocate’ ticket. In her platform, she identifies her top priorities as fighting for access to education, which she describes as a “universal right”, and establishing an “inclusive platform” for both international and domestic students to be represented by PARSA. Walker also states that she will create new lines of communication with students, and work to de-stigmatize discussion surrounding students’ “sexual, physical, and emotional wellbeing”. Her candidate statement concludes that “The term ‘Advocate’ can mean many things, but in 2021 we will ensure that no student is left behind”,

The other Presidential candidate,Tankosic-Gajic, is running on the ‘ANU United’ ticket, which is described as a “team of diverse people” which are running with a shared vision: “GO TOGETHER, GO FURTHER”. Tankosic-Gajic puts forward his organisation of informal academic gatherings of students, and one-on-one tutoring of students who need assistance, as evidence of his “leadership” and “governance” skills, as well as his “commitment to punctuality and… ability to understand and connect with a diverse range of students”. Additionally, he claims that because he is a “local student who was born overseas”, he can relate to the challenges facing both groups of students. The details of the ‘ANU United’ policy can be read here.

Naomi Otoo and Malek Harron are both running for the position of PARSA Vice President – Otoo on Advocate, and Harron on ANU United.

The VP assists the President with the day-to-day functions of PARSA, and also takes an active role in advocating for postgrad students on advisory committees. The current VP sits on a number of committees, including the Academic Board and the University Research Committee.

Otoo is the current PARSA International Officer. Speaking to her experience in this role, she states that one of her main goals is to ensure that international postgraduate students are “integrated into the on-campus student experience”. More generally, she plans to use the role to “promot[e] career readiness, networking opportunities, and increased engagement with University academic staff”. Otoo also states that she will advocate for “affordable and accessible” resources which will support the wellbeing of postgraduate students, and a culture of “inclusivity and respect” at all PARSA events. Lastly, she emphasises her commitment to being “innovative in meeting the needs of students”.

In his candidate statement, Harron touts his previous roles as a Director of PARSA, Tutor at Tjabal Indigenous Higher Education Centre, and as a Senior Resident (SR) at Unilodge. He expresses that these roles have given him experience with “team coordination and leadership, pastoral care, academic matters, project management”. Like Tankosic-Gajic and Otoo, he cites his overseas background, and the insight this gives him into the challenges international students face. Like other candidates, he plans to work to improve the “emotional and mental” wellbeing of students. He also commits to providing “support in language learning for international students, financial and social support, an affordable and accessible campus for students with disabilities, remote student engagement, and most importantly making [the] campus a more culturally diverse and friendly space for everyone”.“I intend to be your voice and a custodian of your trust”, Harron asserts.

The PMAC represents Postgraduate students on University Council, which is the top ANU decision making body on which both Vice Chancellor Brian Schmidt and Chancellor Julie Bishop sit.

College Representatives are responsible for supporting and advocating for the interests of postgraduate students within their academic colleges. This includes responding to ANU and Government policy that may impact students within their college. College Officers are expected to attend college level committees and subcommittees at least every 6 weeks, as well as PARSA Education Committee meetings. There are two representatives per committee, with a convention for one to represent Coursework students and the other to represent Higher Degree Research (HDR) students. College Officers do not receive a stipend, but are eligible for honoraria.

Nominations have been put forward for the following Colleges:

Five of the seven colleges (CAPS, CECS, CHM, CASS and COL) have had a candidate elected to the HDR College Representative role unopposed. There are casual vacancies open for CBE HDR Officer, CASS Coursework Officer, and both the Coursework and HDR College of Science roles.

The statements for each of the college representative candidates can be found on the PARSA website.

This year, the contested portfolio officer roles are: International, Coursework, Disabilities, Education, Environment, Equity, HDR, Social, Women’s, Parents and Carers, Research and Policy, Communications and Welfare. Casual vacancies are open for the roles of Aboriginal and Torres Strait Islander Officer and Queer Officer. All portfolio officers receive a stipend, with the exception of the Research & Policy and Welfare Officers, who are only eligible for honoraria.

Each of the positions are contested by two candidates each, put forward by Advocate for PARSA and ANU United. The statements for each of the portfolio candidates can be found on the PARSA website.

The candidates for the role of Coursework Officer are Tallal Khan (Advocate) and Raghuvir Kelkar (ANU United). The Coursework Officer is responsible for advocating on behalf of postgraduate coursework students in relation to teaching and learning issues. The Officer is tasked with providing feedback and shaping ANU strategies through their engagement with University committees, PARSA campaigns and working groups, and involvement with the PARSA Education Committee.

Candidates for HDR Officer are Dige (Advocate) and Wenzhou (ANU United). Like the role of Coursework Officer, the HDR Officer works to represent the interests of HDR students in relation to their teaching and learning experiences.

The candidates for Equity Officer are Epi Terbio (Advocate) and Anh Back (ANU United). The Equity Officer oversees a number of portfolios that represent the interests and welfare students from marginalised and under-represented groups, including the Disabilities Queer, Aboriginal and Torres Strait Islander, Women’s International, and Parent’s and Carer’s Portfolio, as well as the Welfare Portfolio. Each of the equity portfolio officers also act as the first point of contact for students who require assistance and identify with a given portfolio. As part of their role in overseeing student advocacy in these spaces, the Equity Officer is also the chair of the Equity Committee.

The candidates running for Research and Policy Officer are Ben Langley (Advocate) and Deepthi (ANU United). This role reports to the Vice President, and is tasked with “[contributing] policy and research initiatives under the direction of [the PARSA] President and organisation’s strategy”. This entails work on research projects highlighting student experiences and liaise with external bodies to “legitimise and enhance the research outcomes”. The Officer is responsible for monitoring and analysing policy areas that impact students, such as housing affordability, and contributing to PARSA’s services and policies addressing student needs. The Research and Policy portfolio is also tasked with writing submissions to government inquiries on behalf of PARSA.

The candidates for Women’s Officer are Maya (Advocate) and Batgerel Tolya (ANU United). The Women’s Officer, who reports to the Equity Officer, is responsible for running the annual Women’s Week (held in March), as well as campaigns and events on issues affecting women. The Women’s Officer also represents PARSA in relation to issues like SASH- for instance, the PARSA Women’s Officer has sat on a committee overseeing the implementation of the Respectful Relationships Unit.

The candidates for the position of Parents and Carers Officer are Jhana De Silva and Renita CKT. This role  is responsible for identifying the needs of postgraduate students who are parents and carers, and ensuring that they receive adequate support.To this end, the Officer’s duties include reviewing parenting facilities on campus and identifying areas for improvement and other projects aimed at improving and advocating for the welfare of parents and carers who are studying at ANU. The Parents and Carers Officer is also responsible for running community-building events catered to parents or carers and their families.

The candidates running for International Student Officer are Benjamin Chew (Advocate) and Dash Singh (ANU United). The International Officer leads PARSA’s work in advocating for the interests and welfare of international students. To this end, some of the work the International Officer is tasked include: consulting with international students to identify and raise issues of concern with PARSA and the University, empowering students by providing them with resources and information to assist them with life in Australia, as well as organising events and activities that celebrate and share the different cultures of the PARSA community.

The candidates for Social Officer are Kanishk Kumar (Advocate) and Surendra Kumar (ANU United). The job of the Social Officer is to run trips and events – such as movie nights and the PARSA Ball, among many others – for postgraduate students. The ideal for this role, according to the role description, is for the Social Officer to act as an “connector in the community, working to understand and support students to break down social isolation and build community”.

The candidates for Welfare Officer are Sukriti Kapoor (Advocate) and Aneri Shah (ANU United). The Welfare Officer is tasked with leading PARSA’s work on student wellbeing. This role includes reviewing and providing feedback on services and programs on campus like ANU Counselling, Thrive and Respectful Relationships. Throughout the year, the Officer helps run a range of initiatives, like mental health training and wellness weeks. They also assist with PARSA events and campaigns relating to student wellbeing and health, encompassing topics like student accommodation, domestic violence, sexual health and mental health.

Some of the reporting in this article was reproduced from Observer’s PARSA Explainer by Hayley Hands. It can be read here.