School of Art and Design Without Drinkable Water, Allege Students 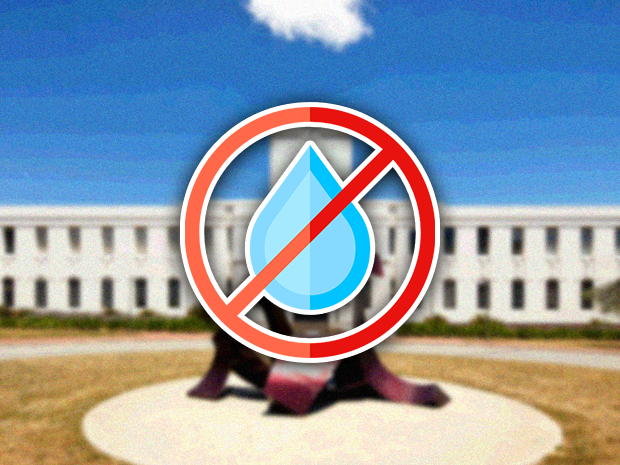 Students of the School of Art and Design (SOAD) have reported a lack of drinkable water in the buildings due to galvanised pipes, COVID-19 and hail damage. The University denies this.

Trace elements of non-toxic sediment have previously been found in the water of the heritage-listed building. Observer understands that this is due to pipes in some sections of the building being galvanised – the application of a metal coat to prevent rusting. ANU conducts monthly flushing of potable water to ensure there is no build up of sediment in the schools drinking water.

An ANU spokesperson told Observer that the University “regularly tests the water” and “drinking water has appropriate filters that are regularly replaced”. Further, the spokesperson explained that SOAD must differentiate between drinking and non-drinking water due to the nature of the activities that occur within the building. “Signage is in place so that people only drink from taps with appropriate filters”, they said.

Despite this, students claim they have been unable to access drinkable water. Art student Giselle Bailie-Anderson told Observer, “there’s only one drinking tap that I know of, which is taped off”. She added that “[she hadn’t] noticed any efforts by ANU to fix the water problem, nor put any signage up”.

Another art student who wishes to remain anonymous said, “there are filtered fountains available, but [have] been shut off due to COVID”. The student also noted that ongoing window construction in the building has made it especially difficult to access the filtered fountains this semester.

An ANU spokesperson has refuted this, stating that any assertions that areas with drinkable water have been closed off due to COVID restrictions “are not correct”.

The SOAD building is currently under construction to repair the damage sustained during the hail storm in January last year. As such, the ceramics studios was closed during the mid-semester break.

An anonymous art student told Observer that they “still drink the water even though [they] shouldn’t” due to the inaccessibility of drinkable water. The student said that their other option is to get water from the school of music.

Observer asked ANU for a list of locations where SOAD students can access drinking water. An ANU spokesperson responded with the following locations:

The spokesperson noted that “all water points that should not be used for drinking are labelled with a standardised ‘no drinking’ sticker”.