LifeChoice Affiliation Rejected by a Landslide 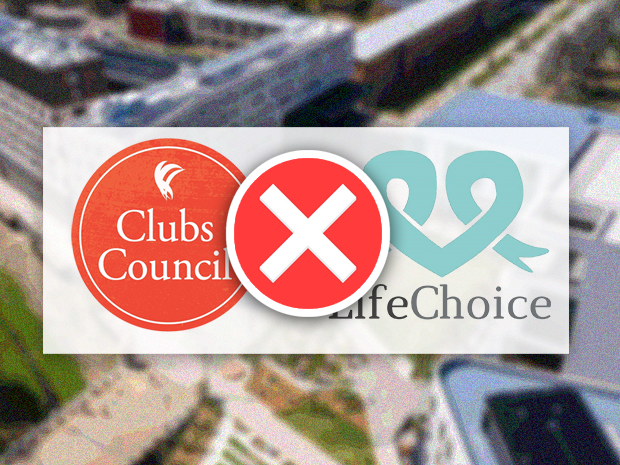 With over 75 attendees present at CCM2, the motion to affiliate LifeChoice ANU received only 5 votes in favour.

Following the rejection of the club’s affiliation motion, LifeChoice ANU told Observer they “appreciated the opportunity to communicate [their] sincere intentions for the club in [their] endeavour to provide greater support to mothers on our campus, while also opening up a dialogue about the dignity of life”. Further, they “consider it regrettable that a university club would be barred from existing merely because some students on campus do not agree with the opinions the club respectfully, sincerely and kindly espouses”.

LifeChoice ANU’s presence at Market Day stirred controversy earlier this semester. At the time, the unaffiliated club was part of a new ‘provisional affiliation’ measure – permitting a club to have a Market Day stall prior to affiliation – and hoped to be affiliated by the Clubs Council at CCM 1. The motion to affiliate was later postponed to CCM 2.

During Student Representative Council 3 (SRC 3) last night, Women’s Officer Avan Daruwalla stated that both the Women’s Department and the Queer* Department had submitted opposition against LifeChoice’s affiliation to Clubs Council.

In her submission, Daruwalla stated, “I have consulted with the diverse community of the department through collective meetings, online platforms, and also through individual consultations. The consensus of these consultations has been that the affiliation of this club will only negatively impact the wellbeing of students”.

She continued, “the continuation of the affiliation process is concerning and appears misogynistic. It is unclear to us why the privilege of affiliation is being prioritised over the actively vocalised needs of women and non-binary students at this university”.

Daruwalla and the Women’s Department urged all voting members of the Clubs Council to vote against the affiliation.

In Deputy Queer* Officer Xya Romilio’s submission against LifeChoice ANU’s affiliation, she cited one of their social media posts, which claimed that “one in four of our generation is missing because of abortion”. In response, Romilio stated, “does this sound like the post of a non-judgmental group? Does this sound like a group that does not shame individuals into following their agenda?”.

Further, Romilio asserted that LifeChoice has created a community built on shame, asserting that “shame has killed people. Shame has caused the ending of so many queer lives. Shame has harmed families and caused tragedies”.

Both department’s submissions were read during CCM 2, prior to the motion. The motion to affiliate LifeChoice was seconded by the ANU Catholic Society.

During his allocated speaking time, the Secretary of LifeChoice ANU stated that the club’s primary intention was “to open up a respectful, informed dialogue on campus, about the dignity of life. Secondly, and perhaps most importantly, [they] want to provide support to those on campus and around Canberra who are looking for support”. He later reiterated that LifeChoice ANU’s “primary existence is to be a helping hand to those on campus”, stating that “accepting LifeChoice as an affiliated club is to accept more support from others on campus”.

The President of LifeChoice ANU noted that the club “recognises that there are many students in this room that probably quite strongly disagree with our views on abortion and euthanasia. And we recognise that that’s okay”. She went on to explain that whilst they are a pro-life club, that “doesn’t mean we believe in forcing our views on anyone else”. The President concluded by stating that LifeChoice was “more than happy for other students to express views that differ from [theirs],” and that LifeChoice members “aren’t the misogynistic monsters some people may perceive us as”.

Maddy Renshaw, an attendee of the meeting, highlighted that any affiliated club has access to SSAF funding. SSAF is the Services and Amenities fee all students pay as part of their university tuition costs. Renshaw spoke against the motion stating that “students should not be made to spend money that goes to supporting the events of this organisation just so they can come to ANU and pursue a degree”.

Daruwalla told Observer she is “thankful that members of the Clubs Council voted in favour of protecting the safety, wellbeing and bodily autonomy of all students on campus – particularly members of the Women’s Department”. She added, “it is regrettable that this situation got to this point at all, and I am available to support anyone feeling distressed by dialogue regarding anti-choice rhetoric”.

Clubs Council Chair, Josh Yeend, has informed Observer that the Clubs Council, ANUSA General Secretary Meghan Malone, and Queer* Officer Vincent Lee are drafting a memorandum of understanding to “codify the consultation procedure” between Clubs Council and ANUSA departments “for future situations”. This document would include “minimum stipulations for inclusive training modules, allowance of Department ex-officio status at council meetings”, and “mandatory consideration at CCM for all [department] submissions, among other things”.

Yeend added that prior to this situation, “the consultation practices between the Clubs Council Executive, and ANUSA Departments is wholly dependent on the approach taken by the Chair, and the Department Officers-in-question”. He also expressed his appreciation for “both the Women’s Department, and the Queer* Department Officers for being so understanding, and moreover, for jointly allowing their student members to have their voices heard in a safe and respectful way on the issues that are pertinent to them”.