The ANUSA election campaign season officially kicked off on August 16, following the opening of nominations. Over the next few months, students can expect to see candidates compete for the various positions that constitute our student union executive and representative council.

From savvy marketing campaigns, to instances of outright electoral fraud, historical candidates have been known to employ a variety of tactics in pursuit of victory.

With assistance from the ANU Archives, Observer took an in-depth look at the history of stupol campaign tactics at the ANU.

A 1986 edition of Woroni described the conduct displayed by candidates in that year’s election as “abysmal”, condemning the emergence of “poster wars, name-dropping, cut throat electioneering, bullshitting, and under-hand tactics” that ultimately defined elections for years to come. However, an unusually detailed election report from 1989 recounts the use of tactics that were far more inappropriate than anything recorded previously.

In the lead up to that year’s election, candidates were required to sign a pledge promising they would not use several tactics, which had become all too common by the end of the decade. This included the monopolisation of poster space, defacement and removal of opposing posters, along with the racist or misogynistic characterisation of opposing candidates. Of the 60 candidates who ran in that year’s election, only 6 signed the pledge. 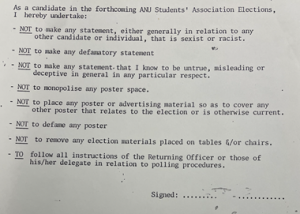 The election that followed was reportedly plagued by what the returning officer described in his annual report as “despicable breaches of electoral conduct”. In one such incident, Returning Officer (RO) David Tanuri reported that “Jeremy Grigg tossed some posters into Sullivans Creek, and then some others in a urinal”. Remarkably, Tanuri also condemned Griggs for “removing some posters and burning them in union court”.

The report also criticised “the willingness of both the president of the student association, and the presidential candidate for ‘left catalyst’ to use Woroni editions 11 and 12 to publicly criticise the handling of the election”. Tanuri further condemned “a water fight outside chemistry” that had escalated to the point where “candidates had to be restrained”. With respect to defamation, Tanuri criticised posters that described the incumbent left catalyst executive as a “bowl of sh*t management”.

By the time polls closed, criticism of the election’s legitimacy and security forced RO Tanuri to lock himself in an office with the ballots overnight. “Fears about the ballot box’s security forced me to spend the night of Thursday 5th of October on the floor outside the room in which they were stored”, wrote Tanuri in that year’s election report. 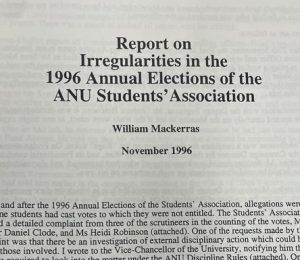 While concerns about ballot security may have been exaggerated in 1989, that certainly wasn’t the case in 1996. That year saw ANUSA elections plagued by allegations of vote tampering, sparking calls for reform that made it all the way to federal parliament. This came to be known as ‘wadgate’, and resulted in reforms that had the ACT electoral commission oversee future elections.

In November of that year, then ANUSA President William Mackerras penned a report on the matter titled, Report on Irregularities in the 1996 Annual Elections of ANUSA. It alleged that on the final day of polling, the Labor Right “Rage” ticket candidate Sean Melbourne, was seen shoving a wad of “about 10 votes” into the polling box. The deputy registrar was informed, and on Monday morning the box was unsealed and examined. It was then discovered that 4 additional wads (141 votes for rage in total) had been shoved in the box. When interviewed for the report, Melbourne wrote, but then refused to sign, a statutory declaration saying that he was instructed to submit the wads by then ANUSA Treasurer Daniel Jenkins, who “asked [him] if [he] could put in some extra ballot papers in the box for him”. He also stated that Jenkins – who as Treasurer was responsible for appointing the Polling Officers that administered the ballots and recorded votes by ticking names off the electoral roll – supplied the blank ballots to Melbourne.

Furthermore, the report found that the Polling Officers had ticked off 150 extra students than the number of ballots submitted, suggesting that they were included in the conspiracy.

The extent of corruption alleged to have occurred was so shocking that ‘wadgate’, made it to the front page of the Canberra Times, and was debated in Federal parliament by Senator Eric Abetz.

The Current State of Affairs:

With the 21st century came a new generation of student politicians. While many of the tactics used by candidates remained the same, they differed in that they were used almost exclusively in the online realm. 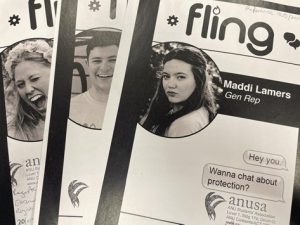 Rise of the “Piss-take” tickets:

From ‘Shark Cage Diving in Lake Burley Griffin for ANUSA’ in 2016, to the more recent ‘Divorced Dads for ANUSA’ in 2021, the rise of satirical tickets has also come to define elections since the advent of social media and meme-based campaigning.

Most notably, the “Nick Xenefon for ANUSA” Facebook page sought to parody the policies and likeness of South Australian Senator Nick Xenophon in 2017. But they were forced to take down the page after being sent a cease and desist letter from Xenophon’s team.

In the last few elections, candidates have kept things relatively tame compared to some of their more unscrupulous predecessors.

However, the Archives make clear that the integrity of election campaigns can fluctuate in response to regulatory complacency, cultural and technological developments like the rise of the internet, as well as, of course, the lengths that any given candidate is willing to go in order to secure that highly prized addition to their LinkedIn profile’s experience page.

Special thanks to Beth Lonergan and the team at ANU Archives for their assistance in materials for this article.