Lift joins Shake Up ANUSA as the second serious election ticket. Like Shake Up, Lift will break tradition by launching the six Executive candidates before most Gen Reps and College Reps are brought on board. Kay explained this is to “allow for diverse engagement” in the ticket by allowing individuals to approach an open ticket, rather than exclusively sourcing candidates from ‘shoulder-tapping’ by ticket heads, a practice which has come under criticism in recent years. To this end, Lift has also utilised the ANUSA-run expression of interest form for candidates, and Kay claims Lift has “contacted everyone” who has submitted the form. These methods don’t “break down every barrier”, Kay acknowledged, but argued increased access can “break barriers for some”. 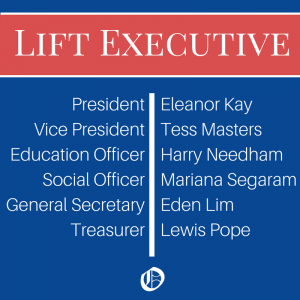 Kay plans to run for the ANU Council seat in addition to President. Historically, these roles have been one and the same, but ANU and the Department of Education pushed the separation of the roles last year, out of concern for potential conflicts of interest caused by the President automatically sitting on Council. Now, a candidate may be elected to both, but will hold the roles independently. Kay argued that having the President sit on the Council “lends ANUSA gravitas”, and means the Association could be better informed of “the biggest issues facing the University”. Additionally, she argued, having a non-President Council member would mean they are “not actually engaged to the fullest extent with the issues facing students”, as they do not have the “full time” advocacy role of the President. Shake Up Presidential candidate Cameron Allan is also planning to run for Council member.

Lift leans more towards hierarchy and the established operating model of ANUSA than rival ticket Shake Up ANUSA. Shake Up, in their launch, argued for a more “inclusive” leadership structure which was “non-hierarchical”, to address a perceived problem with engaging the broader community in decision-making. Kay told Observer that while Lift was “absolutely for” an ANUSA that was “welcoming and supportive”, the reality is that “teams need structure”.

If elected, Kay would be ANUSA’s first female President since 2013. Current President James Connolly recently launched an initiative to increase diversity in the Executive, telling Observer, “our ability to advocate on issues around diversity is increasingly undermined by our consistent election of white men to the presidency.” This series of public meetings will not begin until after the election, which Connolly said was to prevent the initiative affecting voting. Kay emphasised that she did not want to be elected just to tick “a gender diversity box”. “I have so much more to offer ANUSA,” she said, adding, “A push for diversity should be about lifting a generation of ANU graduates who stand up against sexism, racism, transphobia homophobia and ableism in our society and actively fight to combat it and change the landscape for the future.”
Observer will provide detailed coverage of election candidates and policies in the coming weeks.