ANU Vice-Chancellor Brian Schmidt inspected a jam-packed Chifley Library to learn about the issues of available study space. The Vice-Chancellor would not comment on specific solutions for the over-crowding which has seen an eight percent increase in use this year.

Schmidt toured the library at 1PM today, inspecting all four floors and hearing from ANU’s head librarian Roxanne Missingham about the conditions in the library. “In the last four years, there’s been a 23 percent increase in use” of the library, Missingham told Observer. She went on to explain that this year had seen an eight percent increase, which has led to much student frustration. Missingham did comment on the success of the 3rd floor expansion which saw addition of 24 hour access and 50 new seats. 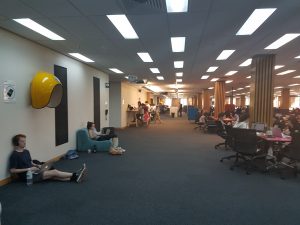 After learning about the library’s usage statistics, Schmidt explored the library and posed for multiple selfies with students. When asked by Observer about possible solutions to the space shortage, Schmidt said he was “looking at that right now, trying to understand the situation”. Missingham at one point canvassed the possibility of adding more study pods like those found on the third level to other parts of the library. 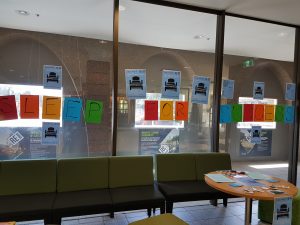 The University’s Sleep for Success health initiative takes an ironic twist in Chifley.

Students have expressed consistent frustration about lack of library space online, and also in person, Missingham said. She noted that students were “often mad when they see other people having a nap”, but argued that “people are entitled to have a nap”, and the issue is structural, rather than with specific students. “We only have so much space”, Missingham said.

Students sleeping in Chifley has been the source of intense discussion on online forums – after several photos of sleeping students were uploaded, one user posted a video to Facebook group ANU Schmidtposting including throwing an object at a sleeping student, which has since been removed. Group administrator Resa Le called this “uncomfortable and unacceptable”, and has recommended against future posts about sleeping students.

ANUSA Vice-President Eleanor Kay pointed out that “unexpected homelessness is something a lot of students do face” and encouraged students break down “the stigma” around students without a place to sleep. Kay encouraged students to approach ANUSA’s Student Assistance Officers if they need accommodation assistance.

The Union Court Redevelopment is scheduled to add several floors of student study space to campus at the start of 2019.