ANU released a report on its Socially Responsible Investment Policy on Monday after SRC passed a motion emphasising the harm done by fossil fuels led by Fossil Free ANU. The motion called for the undergraduate representative to ANU Council to put divestment on the agenda at their next meeting.

In the motion, which was passed at SRC 3 last Tuesday, ANUSA called on ANU to “(d)ivest within five years from … any commingled funds” or direct investment in any of the “Carbon Underground 200 – the top 200 publicly- traded and government owned fossil fuel companies”. The University said that it has undertaken a program to segregate investments for a “more effective implementation of the University’s SRI policy” and to increase transparency. The report detailed complications in  excluding companies with more than 20% revenue from coal, gambling, tobacco or pornography, as some portfolios mix ethically responsible and non-ethically responsible investments in ways that are hard to seperate. Investment schemes and instruments that ‘commingle’ investments “preclude the ability for ANU to exclude companies based on industries where revenue is sourced”, the report explained.

However, the domestic investment scheme has significantly underperformed the ASX financially. The scheme returned 10.57% interest in 2017, which was 2.84% less than the ASX 200 at 13.41%. ANU said in its statement that the manager of the fund estimates that 1.34% of the underperformance was due to the SRI Policy. Despite this explanation, ANU continues to be outperformed in both responsible investment parameters and investment returns by a number of superannuation funds, including Australian Super and CBUS, as well as the dedicated socially responsible investment fund Australian Ethical Investment.

The motion at SRC called on the undergraduate representative on the ANU Council, Eleanor Kay, to put divestment on the agenda of the Council’s next meeting. It was moved by Bella Himmelreich, from Fossil Free ANU, and seconded by Poppy Perry-Evans, Environment Collective Co-officer. Speaking to Observer, Himmelreich argued that the vote was a reflection of student sentiment, saying, “We know that the majority of students support divestment, and now the undergraduate student union [does].” The motion was amended to clarify that even though Kay is both the ANUSA President and undergraduate representative to ANU Council, the the latter position is not an ANUSA representative and cannot be bound by SRC.

The investment fund acts as an endowment fund for the university, and as a superannuation fund for employees. As a superannuation fund, the ANU has a fiduciary duty to maximise returns for their employees, which is balanced against its obligations to act in an ethically responsible way. The fund amounts to approximately $1.34 billion, and is divided into domestic and international portfolios. 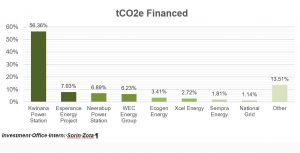 The report highlighted that 85% of emissions from ANU’s infrastructure investment fund came from eight particular assets. The most significant of these is the Kwinana Power Station, which was responsible for 56% of the infrastructure portfolio’s emissions. The power plant currently runs gas-operated turbines, and is undergoing significant expansion to include oil-based turbines as well.

The infrastructure portfolio has a current market value of approximately $130 million and financed almost 180 tonnes of CO2 emissions per million dollars invested (tCO2e/$m). This compared poorly to the ASX200 (a collection of major listed companies trading in Australia) average carbon intensity, which sits at 150 tCO2e/$m, as well as MSCI World (the Morgan Stanley Capital International global index) which financed 138 tCO2e/$m. The report states that “to sequester the carbon produced (by the infrastructure portfolio), 589,039 trees would need to be planted and grown for 10 years.” This is the equivalent of about 650 football pitches worth of trees.

ANU’s overseas portfolio has been more successful in both reducing its carbon intensity and providing returns to the university. The portfolio represents a quarter of the University’s total endowment, and according to the University, it is 52% less carbon intensive than Morgan Stanley’s global index. This number is up from 40% last year, while out performing it by 5.2% in terms of returns for last year, therefore yielding 18.6% on the premium for the university compared to the same index. This is a substantive increase, and reflects the impact of hiring overseas equity managers in 2017.

ANU says it is “committed to maintaining its socially responsible investment strategy” and continuing to meet its responsibilities to superannuation liabilities and endowments. However, the University continues to underperform against other institutions in both respects, at least in its domestic investment fund.