The new name has been announced. Some scaffolding has been removed. The Chamber of Secrets has been opened. Whether you’re someone looking to come to ANU, a Bruce resident wondering where you’re going to live next year, or an unrelated student just wondering what’s with all the trucks at the end of University Avenue, Observer has information for you. We’ve collated all the information we have from ANU websites and media releases, correspondence and discussions with University figures, and emails with ANU. Here’s everything we know about the two new Daley Road residential halls.

Looking from Daley Road, the right-hand side hall will be the new Bruce Hall. The hall on the left will be named Wright Hall; named for Louise Tuckwell’s family. Louise and Graham Tuckwell funded the building of Bruce and Wright Halls with a philanthropic contribution of $100 million. Revenue from the Halls will fund the Tuckwell Scholarship in perpetuity. It is currently unclear what SA5, which currently houses Bruce Hall, will be named next year. 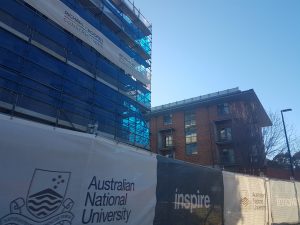 The new Bruce Hall will still have Packard Wing.

The halls will be two distinct buildings with a shared kitchen area. Interestingly, ANU’s Director of Major Projects, Robert Hitchcock, told Observer that the staff-only kitchen area will be underground.

The halls will each have their own “private central quadrangle, which will be secure and accessible only to students of the Halls”, according to the University. There will be green space between the two buildings, which is intended to University Avenue’s greenery. This means that those looking down University Avenue will see more green space at the end, rather than the previous vista of Bruce Hall’s dining hall.

The building appears to have a cream-coloured, rendered surface. However, ANU has said that the “red brick will have same colour/feel” as the old Bruce Hall – so there may be something different under the scaffolding or there may be a combination of rendered and brick components.

Bruce Hall’s Packard Wing will remain intact and will be linked to the new Bruce Hall. This was opened in 2004 and provides self-catered, apartment-style accommodation for postgraduates and later-year undergraduates. We do not currently know how the Wing will be connected to the main buildings.

The view from Clunies Ross Street. All rooms have small balconies.

Each room will have a sink, bed, desk, and wardrobe. It is unclear whether the sinks will have both hot and cold water on tap (as is the case in the older Daley Road halls), or just cold (as in SA5). All rooms will be heated, but there will not be air-conditioning in individual rooms. Common areas will be air-conditioned.

All rooms in both halls will have a small balcony, termed a “Juliet balcony”. ANU is proclaiming that these will have a “fully opening door”, but concedes they are rather small. From what is visible from Clunies Ross St, the balconies appear large enough for two people to stand on. The old Bruce Hall had large balconies attached to some rooms, which were usually given to more senior students. ANU argues this new approach of small balconies for all is “more equitable”.

The University has released a 360° view of a Wright Hall room, and a virtual fly-through of the Hall. From this, it appears that rooms will have single beds like most other Daley Road residences. SA5, where Bruce students currently live, has double beds in all rooms. ANU has said this was highly demanded by students in surveys, but has claimed this contributed to higher rent.

Both halls will have at least some catering. Wright Hall will be “flexi-catered”, while it appears that Bruce Hall will be fully catered, based on ANU’s language of Wright being the “first” to be flexi-catered. ANU says that flexi-catering “gives students autonomy over their individual dining needs”. It’s not clear what exactly this will look like.Some models which Observer has found at other universities include:: allowing students to choose how many meals they would like catered per week; having students purchase “meal vouchers” in bulk or individually to redeem across the year; and even, in some US colleges, providing students with a reloadable “card” that can be used at multiple food vendors on campus.

The two halls will share a kitchen for catering purposes, but it appears they may have separate dining rooms. It is unclear what cooking facilities will be available for students who elect for a lower level of catering. Possible options range from the Ursula Hall model of communal fridges, boiling water, and a small number of microwaves, to the large communal kitchens seen in B&G, Fenner, and SA5. ANU says that students will have the opportunity to undertake “cooking lessons and sessions on healthy eating”.

ANU has started a new “advisory group” called ‘Bruce Hall Keep and Preserve’ This group will “provide advice and ideas as to the integration of Bruce artefacts and furnishings into the new buildings, as well as ways in which the traditions and histories of Bruce can be grown and celebrated in the future”. The Flugelman sculpture and fountain will still be at the Hall, as well as other art, furnishings, and objects “relating to the unique culture and histories of Bruce Hall”. It is unclear whether any of these objects were salvaged by students breaking into the construction site last year.

ANU says it has designed the quadrangle, dining space, and buttery (student-run canteen/bar) with a view to preserving the “look and feel of the original spaces”. This includes working in the “expressed arches” which were a feature of the old dining hall.

New Bruce will have accommodation for approximately 360 residents, in addition to the 78 spaces in Packard Wing.

Wright Hall will have a “modern and casual vibe”, with students having “the opportunity to develop a new culture, personality and set of traditions”, according to ANU. The motto will be “Tenacitas, Comitas, Gratia”, which Louise Tuckwell says she interprets to mean “get on with it, get on with each other and be grateful”. This motto was decided upon “in consultation with Professor Elizabeth Minchin and her colleagues at ANU in the School of Literature, Languages and Linguistics”. The hall will house 428 residents.

Both halls will be ready for the beginning of 2019. ANU could not provide information as to when students and prospective residents would be able to view rooms. When SA5 was under construction in 2016, a few display rooms were available for viewing Open Day.

Eliza Croft is a Tuckwell Scholar. Observer would usually seek to avoid such a conflict, but it was necessary in this instance.