The ANU Campus was built on Ngunnawal and Ngambri land, and there are still many areas around campus that still reflect the impact of Indigenous Australians. In light of ANU NAIDOC week, which celebrates the role of Aboriginal and Torres Strait Islander people within our community, Observer has researched some of the areas of Indigenous importance on campus.

The ANU Aboriginal and Torres Strait Islander Heritage Trail runs across campus, and covers several important sites, including ancient scarred trees and South Oval, which may have been intentionally cleared by Aboriginal people, according to Amy Jarvis, the University Heritage Advisor. The Trail can be accessed through the ANU Walks App, or through a brochure available at several locations on campus such as the Tjabal Centre, Menzies and Chifley Libraries, and Student Central.

The entire Acton area is significant as a meeting place for Aboriginal people, and Sullivan’s Creek was a major water source, along which campsites once existed. A Corroboree site once existed near the entrance of the Botanical Gardens, although current records suggest that the site has been destroyed. Aboriginal artworks, ceremonial, and occupational sites were reportedly located near ANU, but were flooded during the construction of Lake Burley Griffin, according to Jarvis.

The University has been undertaking significant work with the local Aboriginal community, particularly in understanding heritage places and involvement in the Master Plan. This engagement has been done through the four Representative Aboriginal Organisations (RAO): 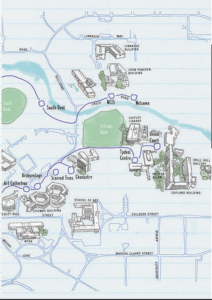 The name ‘Kambri’ means meeting place, and was gifted to the ANU in February, 2018 for the redeveloped Union Court. Braedyn Edwards, the ANUSA Indigenous Officer, told Observer “the naming of Kambri is significant in that they had to bring together the four main groups of Ngunnawal/ Ngambri/ Ngarigu Elders to come up with the name“. In response to this gift, ANU has decided that the new development will contain “a Creekside walk, a teaching bush garden, show a map of country at the entrance of a bridge with the four families acknowledged on its columns, welcome people in language and provide a fire pit in recognition of the importance of smoking ceremonies”, according to the Kambri website.

After a storm in 2016, a large 300 year old apple box tree fell over, as pictured below. ANU Heritage was informed that this tree has cultural significance and included a cultural scar. This prompted a review of all trees on campus, with upwards of six scarred trees found around the  campus. The R N Robertson Cultural Garden was developed in collaboration with the RAOs and contains native food, medicine, artwork, and a handcrafted boomerang shaped seat. The garden is in the final stages of completion. 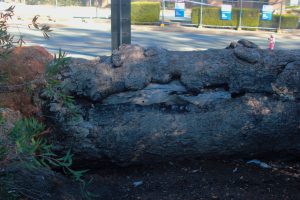 ANU last week received a donation of more than $9 million in Indigenous art from Canberra lawyer Craig Edwards, which ANU called  “the most significant single donation of Indigenous art to an Australian university”. “I think some people underestimate how welcoming these artworks can be for many Indigenous students”, Braedyn Edwards said.

When asked about the importance of symbolic gestures for Aboriginal people, Braedyn Edwards stated that “although symbolism is fantastic, and really important, so are actions … are many Indigenous businesses being invited to participate and benefit from the investment? … Actions are just as important, if not more so, than symbolic gestures.” Businesses for the new development are likely to be announced in August this year.

The ANU Heritage and the School of Archaeology and Anthropology have submitted a heritage grant in 2018 to undertake test excavations on the campus to investigate the existence of intact cultural deposits. Despite the disturbance of the area from ANU  construction, initial reports suggest the possibility of artifacts in the less disturbed parts of the Acton campus.

Jessica Whiting did not contribute to this story.