Finalised ACT bus routes for 2019 have been released today, showing that the number 3 route will no longer travel through campus. No changes were made to the ANU section of the proposed routes after public consultation, though Transport Canberra highlighted the loss of the route to ANU students as a concern. 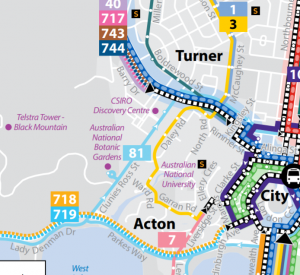 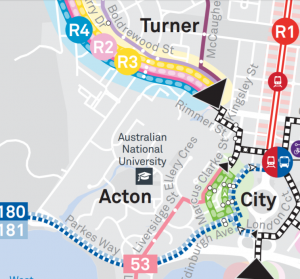 Transport Canberra released a report last Thursday on the feedback it had received about the changes, and its response. The report showed that a pop-up feedback session was held at the ANU on August 9, but only 30 people were spoken to, and only 3 pieces of feedback were recorded. ANU was not given a stakeholder meeting,  unlike ADFA and high schools such as Merici College. The online survey ‘YourSay’ received 4,000 responses overall, with 84% of respondents expressing some level of concern over one or more of the changes. One online response said, “(r)emoving the bus coming down Daley Road (Acton) cuts off literally thousands of students from adequate public transport – putting us almost a kilometre from the nearest stop.” Overall, the new routes will increase the frequency of buses, but decrease the number of stops, meaning that while people have to travel further to get a bus, the buses will come more often.

The report stated that “a common theme” in the responses from tertiary students was the loss of the local routes, and the walking distance to new stops, which “generated a significant amount of opposition”. Transport Canberra noted responses from students with disabilities, who note the changes will “make it difficult… to access classes”. Despite this feedback, the routes surrounding ANU campus did not change from the proposed draft map released in June this year.

Vice Chancellor Brian Schmidt and Pro Vice Chancellor (Student Experience) Richard Baker were asked about the proposed changes at the recent ‘Pizza with Brian’. Schmidt stated that “we are still evolving our disability access plan in a way that meets the community needs”, but asked if a bus was really the “best way to deal with the issue”. Baker said consulted widely with students “and [his] mother, who was very upset”, and noted that the bus goes directly past the Canberra Hospital, where ANU Medical Students undergo clinical teaching. He stated that he wrote a strongly worded letter to the ACT Government regarding the changes.

A spokesperson for Transport Minister Meegan Fitzharris, told the Canberra Times that MyWay card users will be offered “a month of free travel” and more coverage will exist for local shops in the Inner North. There will be buses every 15 minutes between 7am and 7pm Monday to Friday on the 10 Rapid Routes, and Sunday and Public Holiday services will be extended to 10pm.

Shadow Minister for Transport Candice Burch told Observer in July that “The Labor-Greens Government’s proposed changes to the bus network will have a serious negative impact on ANU students”. Burch said that “public transport journeys for all ANU students are likely to be longer, and more likely to require waiting and transferring at interchanges.” She stated that “ both of these factors will not only affect convenience, but will have consequential negative effects on personal safety”, citing safety concerns raised to her office by “several female students who are concerned about their safety walking at night”.

According to Transport Canberra, the changes will see quicker trip times and more direct routes, reducing duplication of services and “longer and less direct routes through suburban areas”. The new network will commence operation in January, 2019, shortly after the Light Rail begins.