A number of amendments to ANUSA’s Election Regulations were passed at last night’s Annual General Meeting. The changes will see campaigning banned in Kambri, and a logarithmic scale for campaign expenditure limits.

General Representative Taylor Heslington moved a motion to change the campaigning exclusion zones. Heslington’s proposal was developed through the Electoral Reform Working Group, which met a number of times during the mid-semester break and early in Term 2.

It is an electoral offence to campaign in exclusion zones. “Campaigning” may include handing out flyers, approaching students, or wearing a ticket-branded shirt. Exclusion zones were introduced for the first time in 2016, and saw campaigning in Union Court limited to the ampitheatre area. In 2017 and 2018, when a large part of campus was under construction, the entire Pop-Up Village was made an exclusion zone. The bulk of campaigning therefore moved to Chifley Meadows.

A significant portion of campus has been included in the exclusion zones.

The motion was to amend the Election Regulations to make the following be exclusion zones:

General Representative Henri Vickers (Labor-Left aligned) attempted to move an amendment to the motion. This amendment would have seen campaigning allowed in Chifley Library’s “associated walkway”, outside the UniLodges on Childers Street, on Daley Road, and in Kambri walkways. Vickers argued the proposed exclusion zones were “excessive”. He said that preventing campaigning in all of Kambri would be “restricting one of the main areas in which ANU students spend their time”, and would advantage candidates who are already well-known.

Zoe Ranganathan (also Labor-Left aligned), who was elected to the ANU Union Board as part of the ‘Revive’ ticket, seconded Vickers’ amendment. “I’m personally concerned about the decreased amount of engagement…. with ANUSA,” she said.

General Secretary Lachy Day (who is planning to run for a position in the election) spoke passionately against the amendment. He argued that allowing campaigning in Kambri would not improve engagement, because people would avoid the areas with campaigners. “[Kambri] would be more dead than if the fees were $2000 to stand there,” he said. Day also referred to “people who come to SRCs to actively try to harass”, saying he did “not want to give them an opportunity to assault more students”. 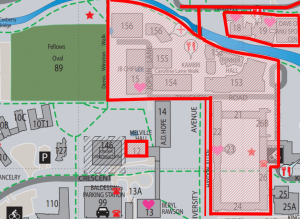 The entire Kambri Precinct is a campaign exclusion zone, with Vickers withdrawing his proposal to relax this.

Disabilities Officer Madhumitha Janagaraja also spoke against Vickers’ proposal. “I think ANUSA elections are fundamentally about choice,” she said. “By removing that choice from people, you’re not effectively representing people.” Janagaraja further stated that she believed the ‘opt-out’ lanyards were not a comprehensive solution, as this was “placing the onus on someone…to say ‘I don’t want to engage in this process’”, rather than on campaigners to be respectful. She also argued that there had been “a massive increase in engagement” since exclusion zones were first implemented.

Vickers withdrew his amendment after Janagaraja’s speech. Clubs Council Secretary Jason Pover suggested an amendment to allow the Returning Officer to temporarily suspend the ‘exclusion zone’ status of an area for the purposes of “debates or other informative events”. This was accepted as a friendly amendment, and the motion overall passed without further opposition.

CAP Representative Kai Clark put forward a motion to change the expenditure cap formula. This ultimately passed, despite some confusion about how logarithms work, and an attempt to exclude shirts from the cap.

The Election Regulations previously stated that the maximum a ticket could spend on campaign expenses was $50 per position it was contesting for the first 10 people, and $25 per position after that. An independent candidate could spend up to $150.

(Where y is the maximum expenditure, x is the number of positions a ticket is contesting, min is “a value designated by the Probity team to account for CPI and other factors”, and max is “the total limit on campaign expenditure for a ticket”.)

There was significant confusion about what this formula would look like in practice. Felix Friedlander, who seconded the motion, ultimately used his speaking time to draw a model of the formula on a whiteboard. Observer has reproduced this diagram below: 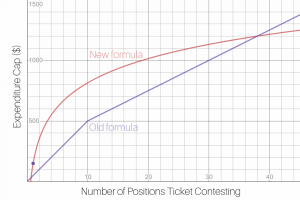 Speaking to the motion, Clark explained that the proposal would “help smaller tickets”. Clark last year ran on a two-person ticket. Under the old Regulations, this meant he and his running mate could only spend $100 in total, as opposed to $300 if they had each run separately as independents. Using $150 (the old independent cap) as the ‘min’ value, and setting ‘max’ to $1200 (the old cap for a ticket contesting 38 positions) results in the following funding per position: 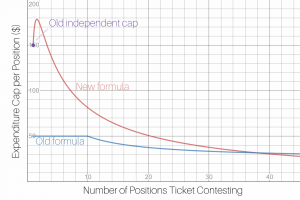 Small tickets are better off than individuals under the new formula.

Thus, tickets with two or three people (or one person contesting multiple positions) will be able to spend more per position than an individual running for one position. Clark told Observer that this was not his original intention, and instead was a consequence of the move to a logarithmic scale and the departure from his and Pover’s original plan to “lower the maximum cap”. “It still, however, fits within our broader intentions, even though the funding may be too skewed towards tickets with 2-4 people,” he said.

What Counts as Expenditure?

Clark’s motion also included a non-exhaustive list of what counts as campaign expenditure, such as banners and merchandise. A number of Labor-aligned students attempted to pass an amendment to the policy to exclude “costumes and clothing” from the expenditure cap. They argued that t-shirts were very expensive and could cause a ticket to quickly reach its spending limit. “We don’t want to force tickets to source unethically sourced t-shirts,” Ranganathan said. Nick Pagonis (Labor-right aligned) said that it was important to exclude shirts from the cap in order to “support Australian workers and Australian clothing”. This amendment was voted down. Clark amended his motion to remove “graphic design beyond that provided by ANUSA” from the list of things that would count towards the expenditure limit, as a plan to provide free basic graphic design for all candidates was not finalised in time.

The Death of the “Independent”

Clark put forward a motion to amend the “Ballot” section of the Election Regulations to remove the ability for candidates to label themselves “independent”. Under the previous Regulations, candidates could designate themselves as part of a ticket or as an independent, and if they did not choose either, they would be labelled as “group unspecified”. Clark’s motion removes the “independent” option, making candidates either register a ticket or be labelled “group unspecified”.

Clark argued that the ‘independent’ label “doesn’t really make sense”, pointing out that it could mean independent from political parties, independent from tickets, or a number of other terms. Clark also referred to major 2018 ticket Refresh ANUSA labelling itself “progressively independent”, arguing this demonstrates the vacuous nature of the term. The motion passed unopposed.

Clark later told Observer that he and other members of the Electoral Reform Working Group “expect to see all candidates register tickets” as a result of the changes. He also said that “with all the funding changes being made…we figured the loss of the ‘Independent’ label would not significantly affect [individuals and small groups]”. To register a ticket, candidates need to secure the signatures of five undergraduate students (which can include the candidate(s)), and must lodge the ticket registration form a number of days before candidate nominations close.

Equal Photocopying for All

Election On Its Way

Elections happen in August each year, and recent years have seen tickets launch during the winter break. This year’s election is shaping up to be more contested than last year’s. General Secretary Lachy Day has already made clear his intention to run, delegating his power to organise the election, and he said at the AGM that there was a “very real possibility” of six tickets running.

Eliza Croft is a member of the Australian Labor Party, but has no affiliation with on-campus political clubs. Jason Pover is the Secretary of Observer, but has no role in the editorial process.