The exam period is over, and four glorious weeks of break beckon – unless you’re doing a winter course. If you’ve been too busy walking to and from 7-11 Barry Drive, here’s the news you might have missed.

ANUSA declared a ‘Climate Emergency’ after representatives at SRC 4 passed a motion to issue a press release declaring a climate emergency and commit funds to actions aimed at tackling it. “ANUSA recognises that climate change is one of the biggest threats facing humanity in the 21st century,” the statement said.

The University announced that there had been a significant data breach. The breach occurred last year, and was detected in May. Staff and student information going back 19 years, including phone numbers, tax file numbers, and addresses, was accessed by a “sophisticated Operator”. ANU has now partnered with IDCARE, which can provide anyone affected with free tailored advice on protecting their information. Students can access this service by contacting 1800 275 268 or [email protected].

POLS1002 students were told their final exam was “compromised” after a tutor allegedly gave students at a revision session too much information. The CASS Associate Dean (Student Experience) initially declared the entire exam invlaid, and scheduled a re-sit for Week 1 Semester 2 in the form of a multiple choice exam. After student outcry, it was decided that instead, the compromised questions would be struck out and exams re-marked accordingly.

A creepy crawly was found in broccoli at the Ursula Hall dining room. This is the third such incident in nine months. 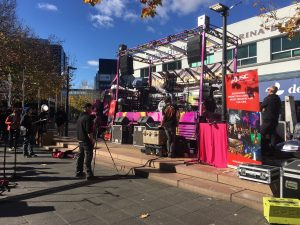 A number of local musicians performed in Garema Place.

A protest was held in Garema Place on Friday over noise restrictions in Canberra. The protest was sparked by concerns a planned hotel could lead to venues being shut down over noise complaints from guests. A number of local musicians performed, with the volume reportedly reaching 90 decibels – well over the 50 decibel nighttime noise limit. 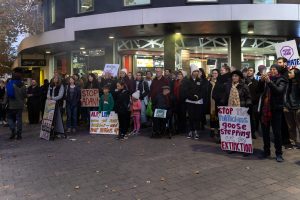 About 200 people gathered in the city on Friday to support climate action, in an event called ‘CBR: Climate Emergency Protest – Stop Adani Now!’. The rally demanded the stopping of the Adani mine, a ban on new coal and gas projects, and sovereignty for Aboriginal and Torres Strait Islander peoples.