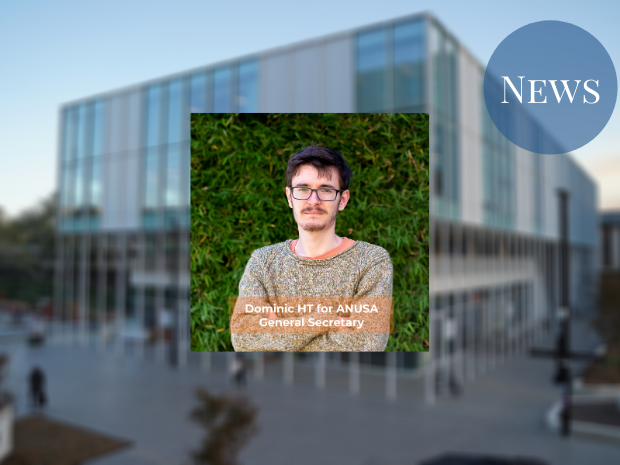 Dominic Harvey-Taylor announced this afternoon that he is running on an independent ticket for ANUSA General Secretary. In an extensive campaign document, Harvey-Taylor outlined a number of policies and reforms that he plans to implement if elected, with a platform focused on increasing “Student Engagement”, “Openness”, and “Accountability”.

Speaking to his previous experience, Harvey-Taylor cites his work as a CAP Representative in 2019, and as a member of the Disputes Committee this year. He states that his contributions in these roles included implementing changes to ANUSA Electoral Regulations, and “structural reform” of ANUSA’s governance procedures.

Harvey-Taylor asserts that he “successfully called out overreach by members of the ANUSA executive” during his time at ANUSA. In a statement to Observer, he notes a submission to the Disputes Committee identifying the invalidity of a motion moved by ANUSA executives via email as an example of this accountability. The Disputes Committee ultimately found in Harvey-Taylor’s favour, as the motion had not been presented to the SRC for debate. He also claims that he pushed for more “public-facing reporting from other representatives”, by urging them to publish their reports on social media, and by publishing a mid-year report describing the progress made by himself and his co-representative on their election promises.

Harvey-Taylor has previously held the role of CAP Students’ Society Education Officer in 2018, and was the Society’s President in 2019. He also states that he has never been affiliated with a political party.

In the campaign document, Harvey-Taylor stated that “a partisan chair, or the perception of a partisan chair can undermine” forums such as the SRC. He highlighted that, as an independent, he does “not have any factional ties” or “allegiances to a particular ticket”. Current General Secretary, Taylor Heslington, ran on the New Leaf ticket, as did many of this year’s ANUSA executive.

In the section titled ‘My Policy and Platform Overview’, Harvey-Taylor identifies a number of issues which he asserts he will work to address. These include a lack of clubs representation, inaccessible SRC meetings, insufficient support for the Financial Review and Disputes Committees, and inadequate handover and training procedures for new student representatives. He also flagged the following as key priorities: standing order reform (in particular, allowing students to ask questions about procedure from the floor), improving the ANUSA website to facilitate “communication and engagement” with students, and reforming the way referendums to affiliate or disaffiliate with national bodies (such as the NUS) are held. Students can read the full suite of Harvey-Taylor’s policies here.

In the caption attached to his campaign profile picture, Harvey-Taylor expressed that he is “unapologetically proud” of his previous work as a student representative, and that he is “passionate about the wider successes of ANUSA”. He also acknowledged the need for “improvement and reform” at the Association, stating that in a “climate of budget cuts and uncertainty” it will have to work “harder than ever to engage directly with our student community”.