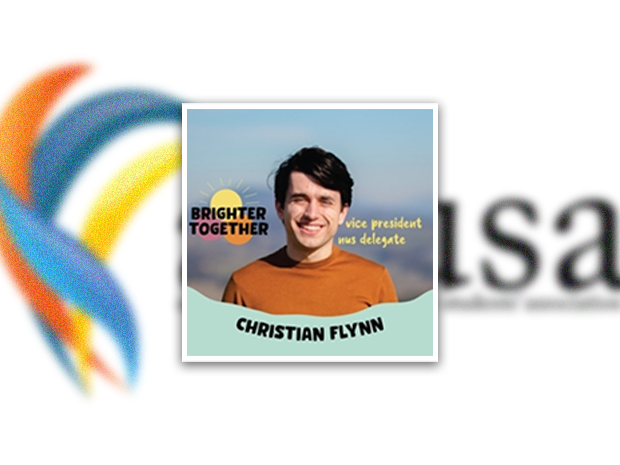 Last year, Flynn ran for Vice President under the ‘Brighter Together’ ticket, which focused on “empowering student voices” through strengthening student “advocacy” and “diversity”. This ticket seems to adopt similar values of diversity, advocacy and runs on left-wing policies.

In his current role as Vice President, Flynn has worked on “overhauling” the current pastoral care system and continued work in SASH advocacy.

The ticket broadly aims to strengthen ANUSA as a body for student activism. While the ticket’s policies are still in development, Flynn “looks forward to developing sound consultative policy” that supports the development of ANUSA as “an activist student union, while setting out financially and environmentally sustainable plans for the association’s future”.

Christian Flynn (he/him) is the ticket’s candidate for President and Undergraduate Member on ANU Council. The ticket announcement summarises Flynn’s interest in increasing student oversight and rebuilding the strategic direction of key ANU services, particularly the Respectful Relationships Unit (RRU). Beyond that, by refocusing the SRC’s energy into building a genuine grassroots student movement, he hopes to sustain ANUSA as a powerful voice on campus for years to come.

Running for Vice President, Chido Nyakuengama (she/her) is the current Bla(c)k, Indigenous and People of Colour (BIPOC) Officer of ANUSA. The Press Release cites Nyakuengama’s focus on protecting students from discrimination, reinvigorating ANUSA’s relationship with students through the BKSS, and centring students in university decision making.

Vying for Treasurer is current ANUSA General Representative Jaya Ryan (he/him). He is keen to see ANUSA diversify its revenue streams, namely through creating an entirely student-led business in Kambri, strengthening bargaining positions of student-led organisations in SSAF negotiations and providing more financial support to students through talks with the ANU Foundation. Ryan ran under the ‘Go the Distance with ANUSA’ ticket last year.

Ben Yates (he/him) is the ticket’s candidate for General Secretary. He was a 2020 General Representative on ANUSA and is currently the General-Secretary of the ANU Environment Collective and Deputy Education Officer. Yates is interested in combatting bureaucratisation and increasing grassroots engagement with ANUSA’s decision-making processes. Last year, Yates ran under ‘Proud! Of Our ANUSA’.

Grace King (she/her) will be running for the new position of Welfare Officer. She is the current Vice-President of Wamburun Hall and a General Representative of ANUSA. King is also a Deputy Education Officer of ANUSA. She is focused on creating more effective and accessible support systems and services, in particular, those that address the needs of marginalised low-SES students. Last year, King ran for ‘Proud! Of Our ANUSA’.

The ticket’s candidate for Education Officer is fifth-year Visual Arts student Beatrice Tucker (they/them). Leveraging various leadership roles including being the 2020-2021 co-convenor of the ACT branch of the Australian Student Environment Network (ASEN), Tucker is focused on combatting staff, course and funding cuts, especially in areas of the ANU that students may feel are forgotten by ANUSA.

The ticket is non-partisan and independent, but is driven by “progressive, left wing values”. National Union of Students (NUS) delegates for the ticket will sit independently or with a faction that does not bind their votes. Flynn underlined that the ticket is interested in what candidates “can do to help students”, rather than their own political affiliations.

The ticket is currently looking for candidates to fill Clubs Officer, General Representative, College Representative and NUS delegate positions. In particular, the ticket is seeking students with “big ideas” who are passionate about student advocacy and activism.

Flynn said there is “no mould for ANUSA representatives”. He encourages candidates who “want to contribute to ANUSA but don’t feel experienced, popular or connected enough” to apply.

Unified by the belief that “ANUSA is better when it is more diverse”, the ticket issues a special invitation to students “who have historically been less included in ANUSA’s work” to apply for a position.

Interested candidates are encouraged to complete the ANUSA Expression of Interest form or to contact any of the ticket’s executive members.