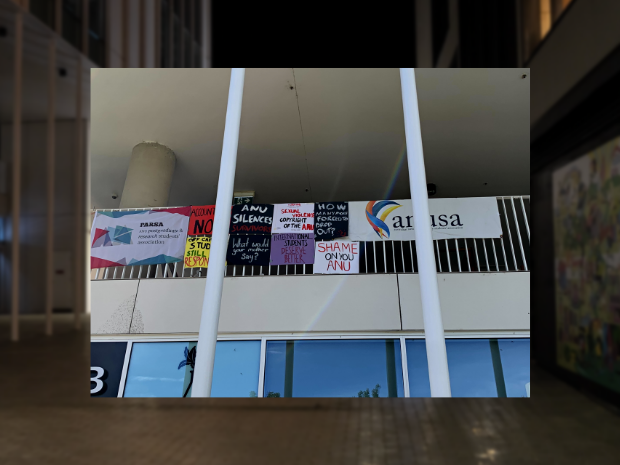 Today, ANU was revealed as one of Australia’s worst universities for incidents of sexual harassment and assault by the National Student Safety Survey (NSSS).

The survey spanned across all 39 Australian universities and was conducted late last year. It is funded by Universities Australia and conducted by the Social Research Centre and violence prevention expert Associate Professor Anastasia Powell. More than 1,600 ANU students participated.

The data reveals that 26.1 per cent of ANU respondents reported being sexually harassed at some point during their time at university. This is twice the national average.

12.3 per cent of ANU respondents reported that they had been sexually assaulted at some point during their time at university – triple the national average.

According to ANUSA Women’s Officer Avan Daruwalla, the results make it clear that “students at ANU face a much higher risk of sexual assault and harassment than at almost any other university.”

It follows the NSSS 2016 Survey and the 2017 Australian Human Rights Commission’s ‘Change the Course’ Report, which ranked ANU as the worst university in Australia for on-campus sexual harassment and the second worst for sexual assault.

The ANU enacted their Sexual Violence Prevention Strategy (SVPS) in 2018, in response to these reports.

In a media statement, ANUSA and the Women’s Department told Observer that in the past five years since the first survey, “student advocates have been campaigning for specific, actionable and immediate actions…to no avail”. The National Union of Students (NUS) also lamented the “5 years of inaction that have followed the 2017 Change the Course Survey”.

“[T]here is a massive difference between what universities say they are doing and what students experience on the ground”, continued the NUS statement, which blamed the quality services monitoring body, Tertiary Education Quality and Standards Authority (TEQSA), for not “keeping universities to account on this.”

Daruwalla also stressed that the statistics released today are more than mere numbers.

“Every incident of sexual assault and harassment documented represents the trauma and unsafety of a student survivor”, she asserted.

Camille Schloffel, Founder and Director of The Stop Campaign, echoed this sentiment. She stated that today’s numbers “reflect real people and their traumatic experiences of which was not their fault and they did not deserve.”

Across Australia, one in three (30.6%) university students have experienced sexual assault in their lifetime, representing 41.8 per cent of female students, 42.9 per cent of transgender students, and 56.1 per cent of non-binary or non-identified students.

One in twenty have been sexually assaulted since starting university (4.5%).

Respondents in student accommodation, alongside those who undertook some or all of their classes on campus were more likely to experience sexual assault and harassment than others. Non-heterosexual students and those with a disability were also more at risk than others.

1 in 20 reported their “most impactful” experience of sexual assault on campus was perpetrated by a university staff member.

1 in 2 respondents knew nothing or very little about the formal reporting processes for both sexual harassment and assault. Only 1 in 2 who did formally report their sexual assault said their univesity explained the reporting process to them, and fewer than 1 in 3 were satisfied with the process.

Only 5.6% of students who were sexually assaulted made a formal complaint to their university. Formal complaints dwindled to 3% for those who had been sexually harassed.

On Monday, the ANU announced their ‘Student Safety & Wellbeing Plan’, which pledged $3.3 million to bolstering the SVPS and achieving the Strategy’s goal of preventing sexual assault and sexual harassment on campus.

However, ANUSA and the Women’s Department described the plan as “a pre-emptive response to the NSSS results” which “has been rushed out without appropriate consultation and neglects to acknowledge that all promised actions could have been undertaken at any prior point.”

ANUSA President Christian Flynn explained that ANU “failed to consult ANUSA” on the plan, or to “notify student representatives of its release” let alone “its existence prior to” Monday. Flynn was also concerned that the plan made “no substantive reference to the NSSS, has no actionable timeline, and failed to meaningfully address students’ major concerns”.

NUS Women’s Officer Jacqueline Price was also disappointed to watch universities prioritise “their PR machines over services for survivors in the lead up to the release”.

“The reality is, student unions will bear the brunt of student distress and disclosures” Price continued, “yet most University Executives don’t even have the decency to tell them what to expect.”

A spokesperson from the ANU told Observer that ANUSA had been consulted on the Plan, and that “ANU has also committed to consulting with its entire community, including student leaders, advocates and survivors, to finalise what each major initiative will look like.”

The ANU did not respond to questions surrounding the timing of the Plan’s release, the delay in action on the SVPS until now, or the concerns raised by the Women’s Department in their Facebook post on 22 March.

ANUSA, the ANU Women’s Department, PARSA, and the Inter Hall Council have called a Special General Meeting for Wednesday 30 March to discuss their key demands for the University and demonstrate their “disappointment and anger towards the ANU’s mishandling of sexual violence on campus.”

Schloffel acknowledged that today’s results are “confronting and bring up strong feelings for many, particularly those who have experienced sexual violence at university.”

She stated that “support services will always be there” for those who need them, and encouraged everyone to consider their support networks and “how to best look after yourself through self-care”.

She hopes that the community can take a moment to reflect on the “tremendous courage” it has taken these “victim-survivors to share their experiences, anonymous or not”.